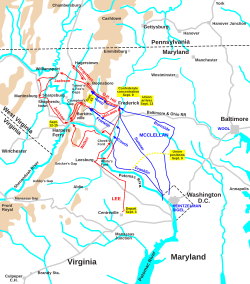 Map of the 1862 Maryland Campaign of the American Civil War

The Maryland Campaign (September 4, 1862–September 20, 1862), also called the Antietam Campaign, was a series of four battles in West Virginia and Maryland initiated by Confederate General Robert E. Lee. It was considered as one of the major turning points in the Civil War for the Union. The goal was for Lee's army to invade the Northern states of Maryland and Pennsylvania. That way he could threaten the cities of Washington, D.C. and Baltimore. By a series of decisive victories Lee thought that the South could gain recognition from England and France and get them to support the Southern cause. The hope was if Lee was victorious, it might cause Abraham Lincoln to sue for peace.

During the summer of 1862, the hopes of the North that the rebellion could be easily crushed were quickly fading. In July, Major General George B. McClellan's defeated attempt to capture the Southern capital at Richmond, Virginia failed. Near the end of August, the Second Battle of Bull Run was another Confederate victory. The Union armies retreated back to Washington, D.C. only a few miles away. In the West, Confederate offensives were proving to be successful. This was causing poor morale among the Union army soldiers.

Lee divided his Army of Northern Virginia into five smaller armies or columns. Three he sent with General "Stonewall" Jackson to attack and hold Harpers Ferry. This way Jackson could control the Shenandoah Valley.

The town of Harpers Ferry, Virginia (now West Virginia), sits at the confluence of the Potomac and Shenandoah Rivers. It is surrounded by high cliffs on three sides making it nearly impossible to defend. Col. Dixon S. Miles, Union commander at Harpers Ferry, kept most the troops near the town instead of taking up commanding positions on the surrounding heights. Jackson put artillery on all the heights and bombarded the garrison. Miles decided to surrender the more than 12,000 men. As he debated with his officers over the decision, Miles was struck by a shell that shattered his left leg, a wound that proved fatal. Jackson then took possession of Harper’s Ferry before joining the rest of Lee’s army at Sharpsburg, He left General A.P. Hill’s division at the garrison to guard the prisoners.

This skirmish took place in Maryland. While most of Lee's army was attacking Harpers Ferry, the rest moved into Maryland with Major General George B. McClellan's Army of the Potomac closely behind them. At Frederick, Maryland the Union army caught up with Lee and the fighting began on South Mountain. It was a natural formation that separated the Shenandoah and Cumberland Valleys from eastern Maryland. Several battles were fought that day over possession of South Mountain. The Confederates were driven back with a large number of casualties. McClellan could have destroyed Lee's army but he waited giving Lee the time to regroup. 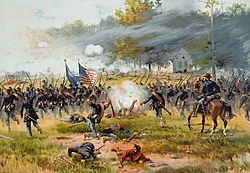 Charge of Iron Brigade near the Dunker Church, on September 17, 1862

The Battle of Antietam, also called the Battle of Sharpsburg, was not only the bloodiest day of the American Civil War, it was the single bloodiest day in American history. Most of the fighting occurred on September 17, 1862 between Antietam Creek and the town of Sharpsburg, Maryland. The events leading to the battle were somewhat strange. Earlier, a copy of Order No. 191 had been used to bundle a Confederate officer's cigars. It was dropped and found by Union soldiers. They were taken to McClellan who now knew exactly what Lee's battle plan was. However, a Southern sympathizer told Lee that McClellan had a copy of the order. So McClellan's advantage was lost. Because McClellan took his time after the Battle of South Mountain, Lee regrouped around Sharpsburg. The battles started on the morning of the 16th. By evening, there was still no clear-cut winner. Both sides were badly bloodied.

Pickets firing across the river at Shepherdstown

Also called the Battle of Botelier's Ford, this battle took place in Jefferson County, West Virginia. As Lee's army retreated south, Union troops under Major General Fitz John Porter's caught up with Lee's rearguard. While troops were still crossing the Potomac they were attacked by General William Pendleton's Confederates. This discouraged the Union command from following the Confederate retreat any further.

A little over a month later, President Lincoln relieved McClellan of command for failing to follow and destroy Lee's army. Major General Ambrose E. Burnside took over command of the Army of the Potomac.

All content from Kiddle encyclopedia articles (including the article images and facts) can be freely used under Attribution-ShareAlike license, unless stated otherwise. Cite this article:
Maryland Campaign Facts for Kids. Kiddle Encyclopedia.