Harpers Ferry is a historic town in Jefferson County, West Virginia, United States. It was formerly spelled Harper's Ferry with an apostrophe and that form continues to appear in some references. It is situated at the confluence of the Potomac and Shenandoah rivers where the U.S. states of Maryland, Virginia and West Virginia meet. It is the easternmost town in West Virginia. The original, lower section of the town is located on a flood plain created by the two rivers and surrounded by higher ground. Historically, Harpers Ferry is best known for John Brown's raid on the Armory in 1859 and its role in the American Civil War. The population was 286 at the 2010 census.

The lower part of Harpers Ferry is located within Harpers Ferry National Historical Park. Most of the remainder, which includes the more highly populated area, is included in the separate Harpers Ferry Historic District. Two other National Register of Historic Places properties adjoin the town: the B & O Railroad Potomac River Crossing and St. Peter's Roman Catholic Church.

The Appalachian Trail Conservancy (ATC) headquarters is located in Harpers Ferry and the town is one of only a few through which the Appalachian Trail passes directly. Other popular outdoor activities include white water rafting, fishing, mountain biking, tubing, canoeing, hiking, zip lining, and rock climbing.

In 1733, Peter Stephens, a squatter, had settled on land near "The Point" (the area where the Potomac and Shenandoah Rivers meet), and established a ferry from Virginia (now West Virginia) to Maryland, across the Potomac. Fourteen years later (1747), while traveling from Maryland to Virginia, Robert Harper passed through the area which was named "The Hole" (the gap in the mountains along the Potomac River). Harper recognized the potential for industry, given the power the two rivers could generate, and the traffic he could ferry across the Potomac River. Harper paid Stephens 30 British guinea for what was essentially Stephens' squatting rights, since the land actually belonged to Lord Fairfax.

In April 1751, Harper purchased 126 acres of land from Lord Fairfax. In 1761, the Virginia General Assembly granted Harper the right to establish and maintain a ferry across the Potomac River (even though a ferry had been functioning successfully in the area before and after Harper first settled there). In 1763, the Virginia General Assembly established the town of "Shenandoah Falls at Mr. Harpers Ferry." 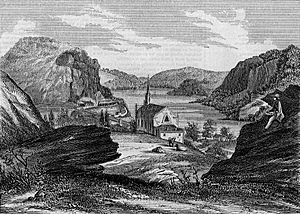 View of Harpers Ferry from Jefferson Rock in 1854. 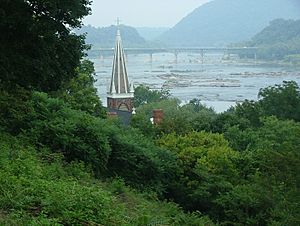 On October 25, 1783, Thomas Jefferson visited Harpers Ferry. He viewed "the passage of the Potomac through the Blue Ridge" from a rock that is now named for him. This stop took place as Jefferson was traveling to Philadelphia and passed through Harpers Ferry with his daughter Patsy. Jefferson called the site "perhaps one of the most stupendous scenes in nature."

George Washington, as president of the Patowmack Company (which was formed to complete river improvements on the Potomac and its tributaries), traveled to Harpers Ferry during the summer of 1785 to determine the need for bypass canals. In 1794, Washington's familiarity with the area led him to propose the site for a new United States armory and arsenal. Some of Washington's family moved to the area; his great-great-nephew, Colonel Lewis Washington, was held hostage during John Brown's raid in 1859, and George's brother Charles Washington founded the nearby Jefferson County town of Charles Town.

In 1796, the federal government purchased a 125-acre (0.5 km2) parcel of land from the heirs of Robert Harper. Construction began on the United States Armory and Arsenal at Harpers Ferry in 1799. This was one of only two such facilities in the U.S., the other being Springfield, Massachusetts. Together they produced most of the small arms for the U.S. Army. The town was transformed into an industrial center; between 1801 and 1861, when it was destroyed to prevent capture during the Civil War, the armory produced more than 600,000 muskets, rifles and pistols. Inventor Captain John H. Hall pioneered the use of interchangeable parts in firearms manufactured at his rifle works at the armory between 1820 and 1840; his M1819 Hall rifle was the first breech-loading weapon adopted by the U.S. Army.

Industrialization continued in 1833 when the Chesapeake & Ohio Canal reached Harpers Ferry, linking it with Washington, D.C. A year later, the Baltimore & Ohio Railroad began service through the town. 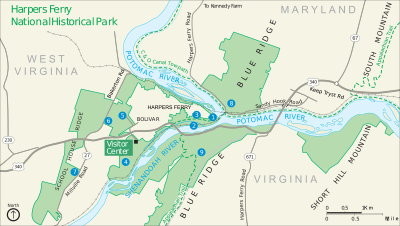 National Park Service map of Harper Ferry showing the Appalachian Trail, with (1) being the scene of John Brown's raid

On October 16, 1859, the abolitionist John Brown led a group of 21 men in a raid on the arsenal. Five of the men were Black: three free Black men, one a freed slave and one a fugitive slave. During this time assisting fugitive slaves was illegal under the Fugitive Slave Act. Brown attacked and captured several buildings; he hoped to use the captured weapons to initiate a slave uprising throughout the South. The first shot mortally wounded Hayward Shepherd, a free black man who had been a night baggage porter for the B&O Railroad running through Harpers Ferry near the armory. The noise from that shot alerted Dr. John Starry shortly after 1:00 am. He walked from his nearby home to investigate the shooting and was confronted by Brown's men. Starry stated that he was a doctor but could do nothing more for Shepherd, and Brown's men allowed him to leave. Instead of going home Starry went to the livery and rode to neighboring towns and villages, alerting residents to the raid.

When Starry reached nearby Charles Town, the church bells were rung to arouse the citizens from their sleep. John Brown's men were quickly pinned down by local citizens and militia, and forced to take refuge in the engine house adjacent to the armory. 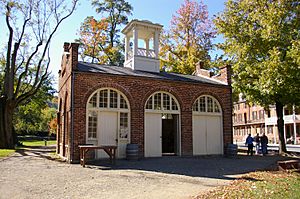 The secretary of war asked for the assistance of the Navy Department for a unit of United States Marines, the nearest troops. Lieutenant Israel Greene was ordered to take a force of 86 Marines to the town. In need of an officer to lead the expedition, U.S. Army Lieutenant Colonel Robert E. Lee was found on leave nearby and was assigned as commander along with Lt. J. E. B. Stuart as his aide-de-camp. Lee led the unit in his regular civilian clothes, as none of his uniforms were available when he accepted the command. The whole contingent arrived by train on October 18, and after negotiation failed they stormed the fire house and captured most of the raiders, killing a few and suffering a single casualty themselves. Brown was tried for treason against the State of Virginia, convicted and hanged in nearby Charles Town. Starry's testimony was integral to his conviction. Following the prosecution (by Andrew Hunter), "John Brown captured the attention of the nation like no other abolitionist or slave owner before or since." The Marines returned to their barracks and Col. Lee returned to finish his leave. The raid was a catalyst for the Civil War. 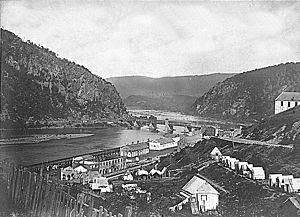 The Civil War was disastrous for Harpers Ferry, which changed hands eight times between 1861 and 1865. When Virginia seceded in April 1861, the U.S. garrison attempted to burn the arsenal and destroy the machinery, to prevent the Confederates from using it. Locals saved the equipment, which the Confederate Army transferred to a more secure location in its capital of Richmond. The U.S. Army never renewed arms production in Harpers Ferry. 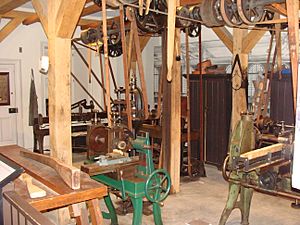 Recreation of a 19th-century gun-making workshop

Because of the town's strategic location on the railroad and at the northern end of the Shenandoah Valley, both Union and Confederate troops moved through Harpers Ferry frequently. The town's garrison of 14,000 Federal troops played a key role in the Confederate invasion of Maryland in September 1862. Gen. Robert E. Lee did not want to continue on to Maryland without capturing the town. It was on his supply line and could control one of his possible routes of retreat if the invasion did not go well.

Dividing his army of approximately 40,000 into four sections, Lee used the cover of the mountains to send three columns under Stonewall Jackson to surround and capture the town. 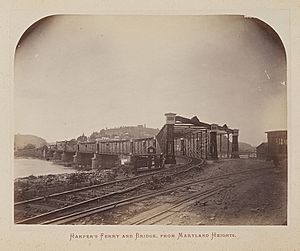 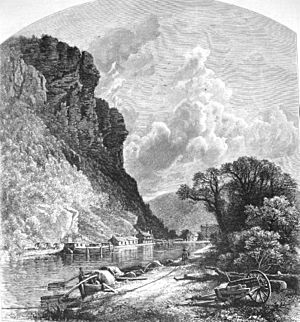 The Battle of Harpers Ferry started with light fighting September 13 as the Confederates tried to capture the Maryland Heights to the northeast, while John Walker moved back over the Potomac to capture Loudoun Heights south of town. After a Confederate artillery bombardment on September 14 and 15, the Federal garrison surrendered. With 12,419 Federal troops captured, the surrender at Harpers Ferry was the largest surrender of U.S. military personnel until the Battle of Bataan in World War II.

Because of the delay in capturing Harpers Ferry and the movement of Federal forces to the west, Lee was forced to regroup at the town of Sharpsburg. Two days later he commanded troops in the Battle of Antietam, which had the highest number of deaths among troops of any single day in United States military history. 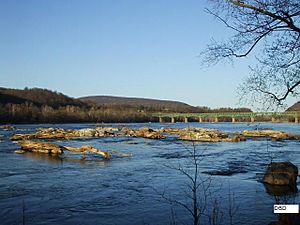 On August 15, 1906, the Niagara Movement led by author and scholar W. E. B. Du Bois, held its first meeting on American soil on the campus of Storer College, now part of Harpers Ferry National Historical Park. The three-day gathering, which was held to secure civil rights for African Americans, was later described by DuBois as "one of the greatest meetings that American Negroes ever held." Attendees of the 1906 meeting walked from Storer College to the nearby farm of the Murphy family, then the site of the historic fort where John Brown's quest to free four million enslaved African Americans reached its bloody climax.

In 1944 most of the town became a park, Harpers Ferry National Historical Park, administered by the National Park Service. The majority of the existing homes in Harpers Ferry (including Charmadoah) are historic, and some of these are registered in the National Register of Historic Places. In 1950 Harpers Ferry had a population of 822.

On July 23, 2015, a fire broke out in downtown Harpers Ferry, destroying eight or nine businesses and two apartments in two historic buildings. The buildings are in the process of being rebuilt.

Harper's Ferry is traditionally the psychological midpoint on the Appalachian Trail, though the mileage is not equal.

Thomas Jefferson wrote in Notes on the State of Virginia, published in 1785, that ". . . the passage of the Patowmac through the Blue Ridge is perhaps one of the most stupendous scenes in Nature".

From most of Harpers Ferry, a fading advertisement for Mennen's Borated Talcum Toilet Powder painted on the cliff face of Maryland Heights decades ago is still visible.

The climate in this area is characterized by hot, humid summers and generally mild to cool winters, with yearly snowfall averaging 20.7 inches. According to the Köppen Climate Classification system, Harpers Ferry has a humid subtropical climate, abbreviated "Cfa" on climate maps. 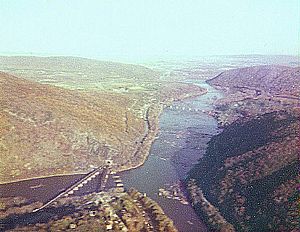 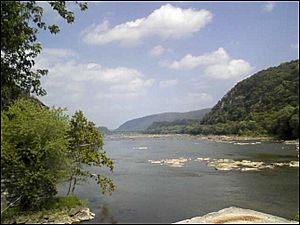 View down river from "The Point" 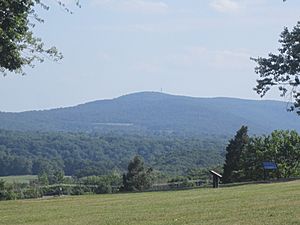 There were 131 households of which 21% had children under the age of 18 living with them, 44% were married couples living together, 13% had a female householder with no husband present, 3% had a male householder with no wife present, and 41% were non-families. 29% of all households were made up of individuals and 15% had someone living alone who was 65 years of age or older. The average household size was 2.18 and the average family size was 2.69.

All content from Kiddle encyclopedia articles (including the article images and facts) can be freely used under Attribution-ShareAlike license, unless stated otherwise. Cite this article:
Harpers Ferry, West Virginia Facts for Kids. Kiddle Encyclopedia.