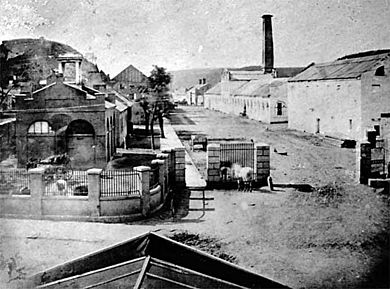 Harper's Ferry Armory in 1862, with the fire engine house on the left 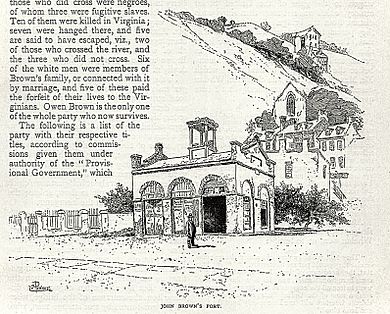 Drawing published in 1883. Note the words over the doors, and the steep hill behind.

John Brown's Fort was originally constructed in 1848 for use as a guard and fire engine house by the federal Harpers Ferry Armory in Harpers Ferry, Virginia (since 1863, West Virginia).

An 1848 military report described the building as "An engine and guard-house 35 1/2 x 24 feet, one story brick, covered with slate, and having copper gutters and down spouts…" The building achieved notoriety during John Brown's raid on Harpers Ferry in 1859. 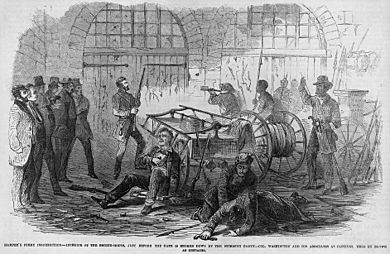 Illustration of the interior of the engine house immediately before the door is broken down. Note the hostages on the left.

John Brown planned to capture the armory and the associated arsenal and use them to supply an army of abolitionists and run-away slave guerrillas. Beginning their raid the night of October 16, Brown and his small army of 21 men (16 white and 5 black) captured the armory and arsenal and succeeded in taking 60 citizens of Harpers Ferry hostage. The local militia and armed townspeople killed several members of the insurrection and forced Brown to take up position in the sturdy fire engine house, where Brown's men had placed several of the hostages and prepared to use the building for defense. On the night of October 17, U.S. marines and then Brevet Colonel Robert E. Lee and his aide J.E.B. Stuart arrived in Harpers Ferry to put down Brown's insurrection. The next morning, using a ladder as a battering ram, the marines broke down the door and stormed the fire engine house. One marine was mortally wounded in the attack as well as several of Brown's men. Some of Brown's men managed to escape, but most were captured, including Brown, who was wounded by the Marine commander, Lt. Green. The hostages were freed. 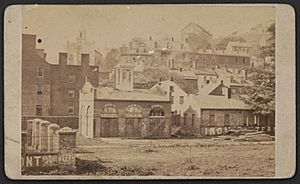 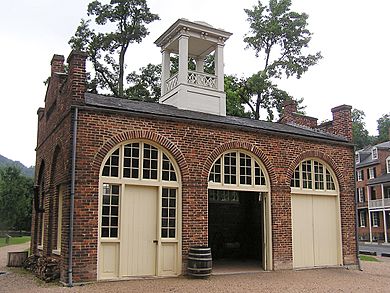 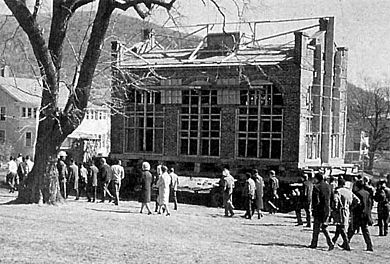 Fort being moved back to its original location, in 1968.

The engine house was the only part of the Harper's Ferry Armory still standing after the Civil War. There was much combat in and around Harpers Ferry, which changed hands several times during the war.

To attract tourists, the words "John Brown's Fort" were painted on the engine house. It "was a tourist destination—almost a shrine—for African Americans in the late nineteenth century." However, it was described thus in 1882:

The walls of the old engine-house at Harper's Ferry, where John Brown made his last stand with a dozen men against 7,000, ...now furnish an artistic background to a huge placard setting forth the virtues of somebody's liver pad. The inscription on the front of the buildlng, which tells the story of Brown's crusade, cannot be read at any distance. The advertisement of the liver pad is in letters as long as a Springfield musket. The grass grows rank in front of the historic spot, as though few pilgrim feet visited it. A clump of tan rag-weed stands in the open doorway where young Watson Brown and his brother were shot down. The roof has gone, the windows have disappeared, and there is an air of neglect and gradual decay about the spot that accords well with the stagnation of the town.

In 1891, the building was sold to a buyer who wished to use it as an attraction at the World's Columbian Exposition in Chicago, "but the venture proved a failure, simply because there was nothing which could connect the 'Brown Fort' with Chicago." The building was dismantled and left on a vacant lot after the exhibition. In 1894, a movement was spearheaded by Washington D.C. journalist Kate Field to preserve the building and move it back to Harpers Ferry. It could not be moved to its original location because the Baltimore and Ohio Railroad had purchased the land and covered it with an embankment in 1894.

Alexander and Mary Murphy deeded 5 acres (20,000 m2) of their Harpers Ferry farm for one dollar as a relocation site, and the Baltimore and Ohio Railroad provided free shipping. Reconstruction of John Brown's Fort on the Murphy farm was completed by November 1895, which included the gates that surrounded the fort. The Murphy Farm was originally established September 1, 1869, and the National Park Service purchased the farm through the Trust for Public Land on December 31, 2002; it is now part of the Harpers Ferry National Historical Park.

A book published in 1905 refers to a "white monument" marking the spot of John Brown's Fort.

On August 17, 1906, at the Murphy Farm, members of the Niagara Movement held an on-site memorial for Brown they called "John Brown Day". Over one hundred prominent African-American men and women walked past the farmhouse to the Fort's location, among them W.E.B. DuBois, Lewis Douglas, and W. T. Greener. The leader of the procession, a physician from Brooklyn named Owen Waller, removed his shoes and socks as if he were walking on holy ground.

The structure cannot be considered "fully authentic" due to the number of times it has been dismantled, moved, and reassembled, each time with potential loss of original building material. It is also not an exact replica, as portions of the building were reconstructed backwards.

Replica at Discovery Park of America

An approximate replica of the firehouse was built in 2012 at the Discovery Park of America museum park in Union City, Tennessee. There is a marker explaining the link with John Brown's raid.

All content from Kiddle encyclopedia articles (including the article images and facts) can be freely used under Attribution-ShareAlike license, unless stated otherwise. Cite this article:
John Brown's Fort Facts for Kids. Kiddle Encyclopedia.