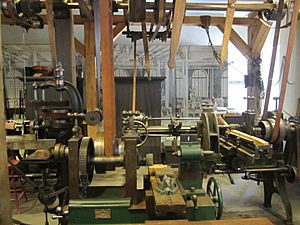 Harpers Ferry Armory, more formally known as the United States Armory and Arsenal at Harpers Ferry, was the second federal armory commissioned by the United States government. It was located in Harpers Ferry, West Virginia (then part of Virginia). It was also called the "mother arsenal", a term coined in 1797 by the first Secretary of the Navy Benjamin Stoddert. The first federal armory was the Springfield Armory located in Springfield, Massachusetts. In many books the town is called “Harper’s Ferry” with an apostrophe. The national armory has been associated with many historical events throughout the history of the United States.

In 1751, Robert Harper purchased 125 acres (51 ha) of land at "The Hole", a name at the time for the place where the Potomac and Shenandoah rivers meet. He set up a ferry service for travelers who needed to cross the Shenandoah River. In 1763, the Virginia General Assembly established the town of "Shenandoah Falls" at "Mr. Harper's Ferry." Soon it just became known as Harpers Ferry. The town grew and became a transportation hub as more new businesses came here.

In 1794, the United States Congress passed a bill calling "for the erecting and repairing of Arsenals and Magazines". President George Washington, given wide latitude in carrying out this order, selected Harpers Ferry, then a part of Virginia, for the location of the Harpers Ferry National Armory. In 1796, the United States government purchased a 125-acre (0.51 km2) parcel of land from the heirs of Robert Harper. In 1799, construction began on the national armory. Three years later, mass production of military arms started.

When it opened, the armory's size seemed to be too small for its workforce. It consisted of only one room. There were 25 workers. Nevertheless, the armory produced many muskets, rifles, and later pistols for the United States. By 1810 the armory was producing about ten thousand weapons per year. The building relied on river power to drive the armory's machinery.

Most of the guns for the 1804 Lewis and Clark Expedition were made at Harpers Ferry. In 1811 the M1819 Hall rifle was designed by Captain John Hall. In 1819 it was adopted by the U.S. Army and produced at Harpers Ferry.

The 1830s and 1840s saw a number of changes in the design of the basic musket produced at the armory. More powerful gunpowder was developed and weapons changed from flintlock to percussion cap operation. By 1855 the armory was producing rifled muskets by the thousands with ‘‘HARPERS FERRY’’ stamped on them.

The upgrades of the arsenal began in 1845-1854 with the construction of seven brand new workshops and the installation of 121 new machines. The new workshops had a brick superstructure with iron framing and sheet metal roofing. These reconstructed arsenal buildings became collectively known as the "U.S. Musket Factory". The armory canal was enlarged so that more water could get to the armory, which meant it would receive more power.

In addition, more people were employed to work at the armory than before: the labor force increased from 25 in 1802 to about 400 workers in 1859. The working conditions improved, but only slightly.

In 1859, the armory became the site of the famous raid by abolitionist John Brown. While unsuccessful in inciting a slave revolt, it did raise Southern fears and increased the tension between North and South prior to the American Civil War.

On April 17, 1861, Virginia seceded from the Union. At this point the arsenal became a prime military target. the governor of Virginia planned to take the valuable armory for the South. He knew that no Southern arsenal could match the quality of the arms being produced at Harpers Ferry. He sent his militia to take the arsenal before the Union Army could send enough troops to hold it. When the Virginia militia was four miles away, army Lieutenant Roger Jones sent an urgent message to Washington, DC explaining the danger they were in and to send them thousands of troops to defend Harpers Ferry. When he received no reply he decided he had to act. On the night of April 18, 1861, Jones ordered his men to set fire to the arsenal and the over 15,000 muskets and all the ammunition stored there. Then they quickly retreated across the bridge to Maryland. But the approaching Virginia militia put out the flames. They were able to save 4,000 muskets and all the machinery. The Confederates held the armory for the next three months. During this time they transported the machinery to the Confederate armory at Fayetteville, North Carolina. Then the Confederates set fire to the buildings when they retreated in July. The armory was destroyed and never rebuilt.

In spite of the armory's strategic importance, it was nearly impossible to defend. The town and arsenal were surrounded on sides by thousand-foot high cliffs. To defend Harpers Ferry required the placement of artillery on all high points over the city. Soldiers stationed at Harpers Ferry during the war described it as a “godforsaken, stinking hole”. The location of Harpers Ferry proved to be a poor choice militarily.

After the Civil War, John Brown's Fort was the only building to survive the destruction by both the Confederates and the Union. The building was named after John Brown for his notorious raid on the Harpers Ferry Armory in 1859. The building was the armory's fire engine and guardhouse.

All content from Kiddle encyclopedia articles (including the article images and facts) can be freely used under Attribution-ShareAlike license, unless stated otherwise. Cite this article:
Harpers Ferry Armory Facts for Kids. Kiddle Encyclopedia.