The Shenandoah River is a tributary of the Potomac River, 55.6 miles (89.5 km) long with two forks approximately 100 miles (160 km) long each. One is in the U.S. states of Virginia while the other in West Virginia.

The river and its tributaries drain the central and lower Shenandoah River valley. They also drain the Page Valley in the Appalachians on the west side of the Blue Ridge Mountains, in northwestern Virginia and the Eastern Panhandle of West Virginia. 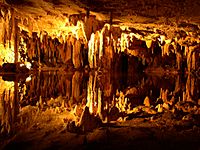 The Shenandoah Valley sits on limestone. The fertile soil made it an attractive place for early settlement. It continues to be a major agricultural area of Virginia and West Virginia.

Some karst topography is evident, and the limestone has a great number of caves. Several have been developed as commercial tourist attractions. These include Luray Caverns, Shenandoah Caverns, and the Skyline Caverns.

On the riverbank a few miles above Harpers Ferry, West Virginia is said to be a cave with an opening just large enough for a rider on horseback to squeeze through. It widened in the interior to a spacious room where hundreds of Col. John Mosby's raiding troops are said to have hidden from pursuing Union cavalry.

All content from Kiddle encyclopedia articles (including the article images and facts) can be freely used under Attribution-ShareAlike license, unless stated otherwise. Cite this article:
Shenandoah River Facts for Kids. Kiddle Encyclopedia.