Luray is the county seat of Page County, Virginia, United States, in the Shenandoah Valley in the northern part of the Commonwealth. The population was 4,895 at the 2010 census.

The town was started by William Staige Marye in 1812, a descendant of a family native to Luray, France. The mayor of the town is Jerry Dofflemyer. 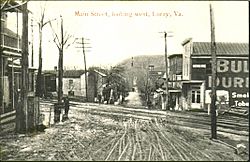 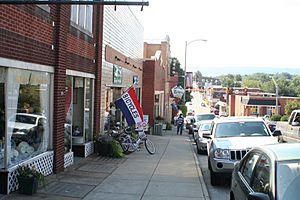 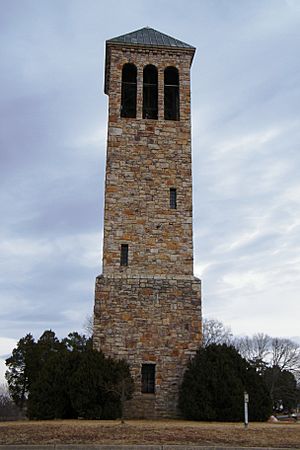 Well over three quarters of the town's population lives in one of the several planned neighborhoods of Luray. Each neighborhood serves as a landmark to the residents of Luray, often citing their neighborhoods as their residence.

View westward of Luray and New Market Gap from Skyline Drive on the Blue Ridge.

Luray is often cited as the location (as is Yager's Mill, on the north side of town, near Furnace Hill) of an engagement between Union and Confederate cavalry on September 24, 1864, though it actually took place approximately three miles north of the town, and even to the north of Yager's Mill.

Following his victory at the Battle of Fisher's Hill Union general Philip Sheridan sent approximately 6,000 troopers under Brigadier General Alfred Torbert into the Luray Valley. Trobert's men engaged approximately 1,200 Confederate cavalry under Brigadier General Williams Wickham. Despite victory in this affair, and moving toward New Market Gap following the engagement, Torbert halted his command that night on the Page County side of the Massanutten, thereby missing an opportunity to cut off Confederate General Jubal Early's retreat from Fisher's Hill. Private Philip Baybutt of the 2nd Massachusetts Cavalry received the Medal of Honor for capturing a Confederate flag during the engagement. This action was part of Sheridan's portion of the Valley Campaigns of 1864.

The climate in this area is characterized by hot, humid summers and generally mild to cool winters. According to the Köppen Climate Classification system, Luray has a humid subtropical climate, abbreviated "Cfa" on climate maps.

Mount Carmel Christian Academy is just south of town limits and is a private Christian school.

Lord Fairfax Community College has a campus in Luray which provides students with nearly all necessary classes needed to graduate from the institution. Many students that attend the Luray Center of Lord Fairfax are from Page, southern Shenandoah, and southern Warren Counties. 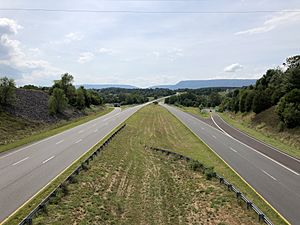 US 211 and US 340 intersect in Luray and are the main roadways into and out of the area. US 211 Bus and US 340 Bus provide local access to downtown Luray.

All content from Kiddle encyclopedia articles (including the article images and facts) can be freely used under Attribution-ShareAlike license, unless stated otherwise. Cite this article:
Luray, Virginia Facts for Kids. Kiddle Encyclopedia.