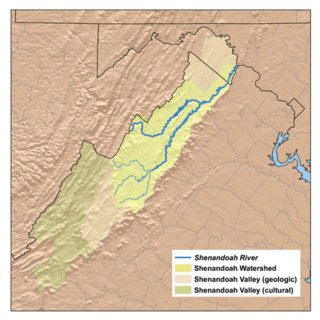 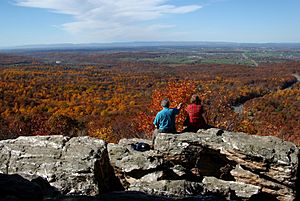 The Shenandoah Valley in the autumn

The Shenandoah Valley (nicknamed "The Big Valley" ) is a geographic valley and cultural region of western Virginia and the Eastern Panhandle of West Virginia in the United States. The valley is bounded on the east by the Blue Ridge Mountains. On the west it is bounded by the eastern front of the Appalachians. To the north it goes to the Potomac River and to the south by the James River. The cultural region covers a larger area that includes all of the valley plus the Virginia highlands to the west, and the Roanoke Valley to the south. The Valley is about 200 miles long. It is the home of two well-known universities, James Madison and Shenandoah University.

For nearly 11,000 years before the Europeans came, Native Americans lived in the Shenandoah Valley. The first European to visit the area was probably a Jesuit priest in 1632. However, the first European credited with exploring the Valley was a German doctor named John Lederer in 1669. In the 1600s, Englishmen were told about the large forests which included chestnut trees as tall as 600 feet.

It is named for the river that stretches much of its length. The Shenandoah Valley has eight counties in Virginia and two counties in West Virginia.

All content from Kiddle encyclopedia articles (including the article images and facts) can be freely used under Attribution-ShareAlike license, unless stated otherwise. Cite this article:
Shenandoah Valley Facts for Kids. Kiddle Encyclopedia.