Warren County is a U.S. county located in the Commonwealth of Virginia. The 2010 census places Warren County within the Washington-Arlington-Alexandria, DC-VA-MD-WV Metropolitan Statistical Area with a population of 37,575. The county seat is Front Royal.

Warren County was established in 1836 from Frederick and Shenandoah counties. The county is named for Joseph Warren. During the Civil War the Battle of Front Royal took place in the county on May 23, 1862.

For many years, Avtex Fibers (formerly known as the American Viscose Corporation from 1910 to 1976), was the county's largest employer and taxpayer. At its height, it employed over 800 residents throughout Front Royal and Warren County.

Towards the late 1980s, however, the company's main plant in Front Royal was forced to close as a result of numerous environmental violations, which eventually resulted in the site being declared a Superfund site. The county, reeling from the sudden loss of jobs and tax revenue, established the Warren County Economic Development Authority (WCEDA) to stimulate and diversify its economy as well as the economy of Town of Front Royal, its county seat. The purpose of the WCEDA is to foster and stimulate industry and economic development within Warren County and the town of Front Royal. 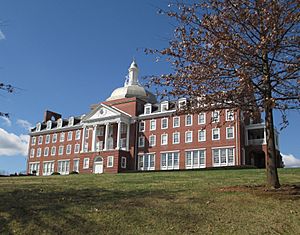 All content from Kiddle encyclopedia articles (including the article images and facts) can be freely used under Attribution-ShareAlike license, unless stated otherwise. Cite this article:
Warren County, Virginia Facts for Kids. Kiddle Encyclopedia.