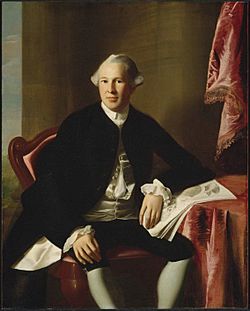 Warren enlisted Paul Revere and William Dawes on April 18, 1775. They were to leave Boston and spread the alarm that the British were about to raid Concord, Massachusetts and arrest rebel leaders Samuel Adams and John Hancock.

Warren was appointed Major General in the Massachusetts colony's militia just before the June 17, 1775 Battle of Bunker Hill. But instead of exercising his rank, Warren served in the battle as a private soldier. He was killed in combat when British troops attacked Breed's Hill.

Many United States cities and towns are named for Warren.

All content from Kiddle encyclopedia articles (including the article images and facts) can be freely used under Attribution-ShareAlike license, unless stated otherwise. Cite this article:
Joseph Warren Facts for Kids. Kiddle Encyclopedia.