William Dawes Jr. (April 6, 1745 – February 25, 1799) was one of several men who in April 1775 alerted colonial minutemen in Massachusetts of the approach of British army troops prior to the Battles of Lexington and Concord at the outset of the American Revolution. For some years, Paul Revere had the most renown for his ride of warning of this event.

Dawes was born in Boston, Massachusetts, on April 6, 1745, to William and Lydia Dawes (née Boone), and baptized at Boston's Old South Church. He became a tanner and was active in Boston's militia. On May 3, 1768, Dawes married Mehitable May, the daughter of Samuel and Catherine May (née Mears). The Boston Gazette noted that for his wedding, he wore a suit entirely made in North America. At the time, Whigs were trying to organize a boycott of British products in order to pressure Parliament to repeal the Townshend Acts.

It is likely that in September 1774, Dawes was instrumental in helping Boston's militia artillery company secure its four small cannons from British army control. The Massachusetts Provincial Congress certainly sent word to him in February 1775 that it was time to move two of those weapons out of Boston.

On another occasion, Dawes and some others daringly stole two cannon which were in a building that was under guard by a British grenadier at the time. They sneaked the cannon out through a window in the back of the building then hid them in a woodbox in a schoolhouse next door for retrieval later. Upon discovery of the loss, the British authorities closely questioned the schoolmaster, who coolly denied any knowledge of the affair, while keeping his feet casually propped up on the woodbox. Dawes hurt his wrist in the escapade, and some days later, went to a fellow member of the Sons of Liberty, Dr. Joseph Warren for treatment. Warren asked Dawes how he hurt himself. Dawes demurred, and Warren (who probably knew about the cannon incident) wisely responded by saying that it was best that he did not know...

Dawes, who was known and trusted by Sons of Liberty leader Dr. Joseph Warren, was assigned by Warren to ride from Boston to Lexington, Massachusetts, on the night of April 18, 1775, when it became clear that a British column was going to march into the countryside. Dawes' mission was to warn John Hancock and Samuel Adams that they were in danger of arrest. Dawes took the land route out of Boston through the Boston Neck, leaving just before the British military sealed off the town.

Also acting under Dr. Warren, Paul Revere arranged for another rider waiting across the Charles River in Charlestown to be told of the army's route with lanterns hung in Old North Church. To be certain the message would get through, Revere rowed across the river and started riding westward himself. Later, Henry Wadsworth Longfellow's the historically inaccurate poem "Paul Revere's Ride" would focus entirely on Revere, making him a composite of the many alarm riders that night.

Dawes and Revere arrived at the Hancock-Clarke House in Lexington about the same time, shortly after midnight. Revere arrived slightly earlier, despite having stopped to speak to militia officers in towns along the way, as his route was shorter and his horse faster. After warning Adams and Hancock to leave, Revere and Dawes proceeded to Concord in case that was the British column's goal. Revere no doubt knew that the Provincial Congress had stored munitions there, including the cannon which Dawes had helped to secure. Along the way, the two men met Samuel Prescott, a local young physician, who joined them.

A squad of mounted British officers awaited on the road between Lexington and Concord. They had already arrested some riders heading west with news of the troops, and they called for Dawes, Revere, and Prescott to halt. The three men rode in different directions, hoping one would escape. Dawes, according to the story he told his children, rode into the yard of a house shouting that he had lured two officers there. Fearing an ambush, the officers stopped chasing him. Dawes's horse bucked him off, however, and he had to walk back to Lexington. He later said that in the morning, he returned to the same yard and found the watch that had fallen from his pocket. Otherwise, Dawes's activity during the Battle of Lexington and Concord remains unknown.

Dawes and his companions' warnings allowed the town militias to muster a sufficient force for the first open battle of the American Revolutionary War and the first colonial victory. The British troops did not find most of the weapons they had marched to destroy and sustained serious losses during their retreat to Boston while under attack by the colonists.

Service in the American Revolution

On September 9, 1776 Dawes was commissioned second major of the Boston militia regiment.

Also during the war, Dawes worked as a quartermaster in central Massachusetts. British POWs from the Battle of Saratoga complained to Parliament that he gave them short supplies; his family countered that Dawes believed that they were stealing from farmers while being marched to Boston – as most armies on the march were prone to do. 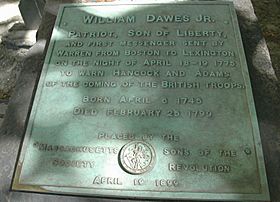 Dawes refused to join a punitive expedition against Indians ordered by Governor Phillip in December 1790.

Dawes died in Marlborough, Massachusetts, on February 25, 1799. He was believed to have been buried in the King's Chapel Burying Ground, but modern research points to his resting place now being in his first wife's family plot in Forest Hills Cemetery in Jamaica Plain.

The poem by Henry Wadsworth Longfellow, "Paul Revere's Ride", has been criticized by modern historians for overstating the role of Revere in the night's events. Revere's may have been a better story, but Dawes and Prescott were more successful in achieving their missions. In 1896 Helen F. Moore, dismayed that William Dawes had been forgotten, penned a parody of Longfellow's poem.

The difference in Revere's and Dawes's achievement and legacy is examined by Malcolm Gladwell in his book The Tipping Point, where he concludes that Revere would be classified as a connector whereas Dawes was an "ordinary man."

Dawes's ride is commemorated on a traffic island in Cambridge, Massachusetts, heavily travelled by pedestrians, at the intersection of Garden Street and Massachusetts Avenue in Harvard Square, and known as Dawes Island. Dawes's passage through the area is represented by bronze horseshoes embedded in the sidewalk, as hoofprints, accompanied by an inscription giving his name and the date (inaccurately stated as April 19, 1775), and by historical displays.

William Dawes was also a first cousin of Thomas Dawes, who was a Revolutionary War colonel, a noted architect/builder, and held numerous government positions; another cousin twice removed was Congressman Henry L. Dawes (1812-1903).

All content from Kiddle encyclopedia articles (including the article images and facts) can be freely used under Attribution-ShareAlike license, unless stated otherwise. Cite this article:
William Dawes Facts for Kids. Kiddle Encyclopedia.