Charles Gates Dawes (August 27, 1865 – April 23, 1951) was an American banker and politician who was the 30th Vice President of the United States (1925 – 29). For his work on the Dawes Plan for World War I reparations he was a cowinner of the Nobel Peace Prize in 1925. Dawes served in the First World War, was the Comptroller of the Currency, the first director of the Bureau of the Budget, and, in later life, the Ambassador to the United Kingdom. 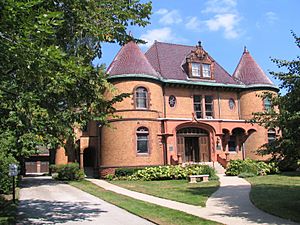 From 1909 to 1951, Charles G. Dawes lived in this house at 225 Greenwood St. in Evanston, Illinois, which was built in 1894 by Robert Sheppard. The house is a National Historic Landmark.

World War I participation and the Nobel Peace Prize 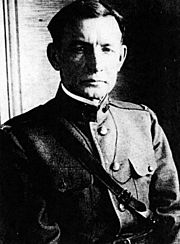 Dawes helped support the first Anglo-French Loan to the Entente of $500,000,000. Dawes support was important because the House of Morgan needed public support from a non-Morgan banker. The Morgan banker Lamont said that Dawes' support would "make a position for him in the banking world such as he otherwise could never hope to make." (Loans were seen as possibly violating neutrality, and Wilson was still resisting permitting loans.)

During the First World War, Dawes was commissioned Major, Lieutenant Colonel, and Brigadier General of the Seventeenth Engineers. He served with the American Expeditionary Force as chief of supply procurement and was a member of the Liquidation Commission, United States War Department.

All content from Kiddle encyclopedia articles (including the article images and facts) can be freely used under Attribution-ShareAlike license, unless stated otherwise. Cite this article:
Charles G. Dawes Facts for Kids. Kiddle Encyclopedia.