Evanston ( ev-ƏN-stən) is a city in the Chicagoland area. Located in Cook County, Illinois, United States, it is situated on the North Shore along Lake Michigan. Evanston is 12 miles (19 km) north of Downtown Chicago, bordered by Chicago to the south, Skokie to the west, Wilmette to the north, and Lake Michigan to the east. Incorporated in 1863, Evanston had a population of 78,110 as of 2020[update].

Evanston is home to the highly ranked Northwestern University, founded before the city's incorporation in 1855, and is one of the world's leading research universities. Known for its socially liberal politics and ethnically diverse population, Evanston nears 90% support for Democratic presidential candidates and became one of the first cities to institute a reparations program, which offers housing subsidies for Black residents (or descendants of Black residents) who faced housing discrimination prior to 1960.

Prior to the 1830s, the area now occupied by Evanston was mainly uninhabited, consisting largely of wetlands and swampy forest. However, Potawatomi Indians used trails along higher lying ridges that ran in a general north-south direction through the area, and had at least some semi-permanent settlements along the trails. 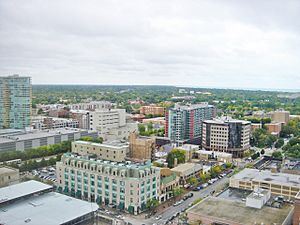 A part of downtown Evanston, as seen in October 2005

French explorers referred to the general area as "Grosse Pointe" after a point of land jutting into Lake Michigan about 13 miles (21 km) north of the mouth of the Chicago River. After the first non-Native Americans settled in the area in 1836, the names "Grosse Point Territory" and "Gross Point voting district" were used through the 1830s and 1840s, although the territory had no defined boundaries. The area remained only sparsely settled, supporting some farming and lumber activity on some of the higher ground, as well as a number of taverns or "hotels" along the ridge roads.

In 1850, a township called Ridgeville was organized, extending from Graceland Cemetery in Chicago to the southern edge of the Ouilmette Reservation, along what is now Central Street, and from Lake Michigan to Western Avenue in Chicago. The 1850 census shows a few hundred settlers in this township, and a post office with the name of Ridgeville was established at one of the taverns. However, no municipality yet existed.

In 1851, a group of Methodist business leaders founded Northwestern University and Garrett Biblical Institute. They chose a bluffed and wooded site along the lake as Northwestern's home, purchasing several hundred acres of land from Dr. John Foster, a Chicago farm owner. In 1854, the founders of Northwestern submitted to the county judge their plans for a city to be named Evanston after John Evans, one of their leaders. In 1857, the request was granted. The township of Evanston was split off from Ridgeville Township; at approximately the same time, that portion of Ridgeville south of Devon Avenue was organized as Lake View Township. The nine founders, including John Evans, Orrington Lunt, and Andrew Brown, hoped their university would attain high standards of intellectual excellence. Today these hopes have been fulfilled, as Northwestern consistently ranks with the best of the nation's universities.

Evanston was formally incorporated as a town on December 29, 1863, but declined in 1869 to become a city despite the Illinois legislature passing a bill for that purpose. Evanston expanded after the Civil War with the annexation of the village of North Evanston. Finally, in early 1892, following the annexation of the village of South Evanston, voters elected to organize as a city. The 1892 boundaries are largely those that exist today.

During the 1960s, Northwestern University changed the city's shoreline by adding a 74-acre (30 ha) lakefill.

In August 1954, Evanston hosted the second assembly of the World Council of Churches, still the only WCC assembly to have been held in the United States. President Dwight Eisenhower welcomed the delegates, and Dag Hammarskjöld, secretary-general of the United Nations, delivered an important address entitled "An instrument of faith".

Evanston first received power in April 1893. Many people lined the streets on Emerson St. where the first appearance of street lights were lined and turned on. Today, the city is home to Northwestern University, Music Institute of Chicago, and other educational institutions, as well as headquarters of Alpha Phi International women's fraternity, Rotary International, the National Merit Scholarship Corporation, the National Lekotek Center, the Sigma Alpha Epsilon fraternity, the Sigma Chi Fraternity and the Woman's Christian Temperance Union.

Evanston is the birthplace of Tinkertoys, and Evanston, along with Ithaca, New York, Two Rivers, Wisconsin, and Plainfield, Illinois, also lays claim to having originated the ice cream sundae. Evanston was the home of the Clayton Mark and Company, which for many years supplied the most jobs. 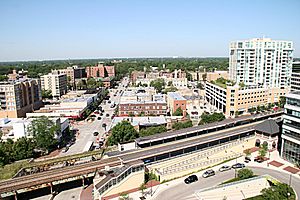 Shops along Davis Street, looking west, August 2006. The Davis Street Metra stop is visible in the lower half of the photograph.

Evanston's growth occurred largely because of its accessibility from Chicago by rail. The Northwestern founders did not finalize their commitment to siting the university there until they were assured the Chicago & Milwaukee Railway line would run there. C&M trains began stopping in Evanston in 1855. Evanston later experienced rapid growth as one of the first streetcar suburbs. The North Shore Line which gave the area its nickname started at Church Street in Evanston and continued up to Waukegan.

The city is still connected to Chicago by rail transit. The CTA's Purple Line, part of the Chicago 'L' system, runs through Evanston. From its terminal at Howard in Chicago, the line heads north to the South Boulevard, Main, Dempster, Davis, Foster, Noyes, and Central stations, before terminating at the Linden station in Wilmette, Illinois. Metra's Union Pacific/North Line also serves Evanston, with stations at Main Street, Davis Street and Central Street, the first two being adjacent to Purple Line stations. The CTA's Yellow Line also runs through the city, though it does not stop there.

Active modes of transportation include miles of sidewalks and bicycle lanes.

The largest automobile routes from Chicago to Evanston include Lake Shore Drive, the Edens Expressway (I-94), and McCormick Boulevard, although the first two of those do not extend to Evanston itself and require driving through Rogers Park (via Sheridan Road or Ridge Avenue) and Skokie, respectively. The main routes from the north are the Edens, Green Bay Road, and Sheridan Road.

Use as film location

Evanston's variety of housing and commercial districts, combined with easy access to Chicago, make it a popular filming location. Evanston as of December 2008 is listed as a filming location for 65 different films, notably those of John Hughes. Much of the 1984 film Sixteen Candles was filmed in and around Evanston, as was the 1993 film Dennis the Menace, and the 1997 film Home Alone 3. A number of scenes from the 1986 Garry Marshall film Nothing in Common were filmed on the Northwestern University campus and Evanston's lakeshore. Although not filmed there, the 2004 film Mean Girls is set in the Evanston suburbs, and makes several references to the area. In the 2003 film Cheaper by the Dozen, the family moves to Evanston. Additionally, the baseball movie Rookie of the Year, featuring Gary Busey and Thomas Ian Nicholas, was partially shot at Haven Middle School.

In The Princess Bride, according to IMDB, the screenplay says that the boy and his grandfather live in Evanston. This was also stated by Mandy Patinkin in a behind-the-scenes interview. The story's author, William Goldman, was born in Chicago and grew up in Highland Park just a couple of miles away from Evanston.

Evanston has gained recognition and reputation for efforts related to sustainability, including those by government, citizens, and institutions. In 2015, the city was named the World Wildlife Fund's Earth Hour Capital after competing against cities including Seattle and Cleveland. In 2016, Evanston was again a finalist in the competition.

In October 2006, the city voted to sign the United States Conference of Mayors Climate Protection Agreement, and a number of citizen task forces convened to develop a plan to reduce the city's carbon footprint. The Evanston Climate Action Plan ("ECAP"), accepted by the City Council in November 2008, suggested over 200 strategies to make Evanston more sustainable, principally by reducing carbon emissions associated with transportation, buildings, energy sources, waste, and food production. In June 2011, the United States Conference of Mayors awarded Evanston first place in the small city category of the Mayors' Climate Protection Awards, based largely on the city's use of the ECAP, which the city asserts has reduced emissions by 24,000 metric tons per year. On September 15, 2011, Wal-Mart presented Mayor Tisdahl with a $15,000 award in recognition of the honor, which the mayor donated to Citizens' Greener Evanston.

An Evanston Strategic Plan passed on March 27, 2006, aspired to create the most livable city in America and to promote the highest quality of life for all residents. One goal is to create and maintain functionally appropriate, sustainable, accessible high quality infrastructure and facilities. This includes continual development of an environmentally sensitive lakefront and implementation of a comprehensive long-range infrastructure plan. Another goal is to protect the city's natural resources and to build environment, not destroy it. The city also wants to improve its transportation resources to be more safe, integrated, accessible, responsive, and energy-efficient. Evanston has an environment board and an office of sustainability.

The single largest carbon-reducing strategy identified in the ECAP, the development of an offshore wind farm in Lake Michigan, gained widespread attention. In April 2010, Evanston's City Council voted to authorize issuing a Request for Information (RFI) so that interested parties could provide information on developing a wind energy facility 4 miles (6 km) off the coast of Lake Michigan. Following the receipt of responses, the Mayor appointed a committee to evaluate the information received. The committee's report was accepted in spring 2011, and the City Council voted to move forward with exploration of the concept. In the meantime, Evanston legislators introduced legislation, signed into law in summer 2011, creating a state offshore wind council to propose how to regulate possible development of such projects.

Northwestern University's Ford Engineering Design Center is a LEED Silver certified building, and the Jewish Reconstructionist Congregation has built a LEED Platinum certified synagogue. Not-for-profit groups active on environmental issues include Citizens' Greener Evanston, an outgrowth of the hundreds of citizens who participated in the creation of the Climate Action Plan, the Business Alliance for a Sustainable Evanston, a coalition of local businesses committed to advancing environmental sustainability and economic progress in Evanston's commercial sector, The Talking Farm, an organization devoted to sustainable urban farming, and the Evanston Environmental Association, who organizes an annual "Green Living Festival" and other events.

Companies based in Evanston include ZS Associates.

As of 2015, according to the State of Illinois Dept Commerce and Economic Opportunity and Individual Employers, the top employers in the city are: 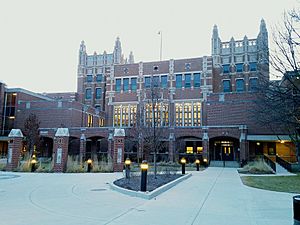 Evanston-Skokie Community Consolidated School District 65, covering all of Evanston and a small part of Skokie, provides primary education from pre-kindergarten through grade 8. The district has ten elementary schools (kindergarten through fifth grade), three middle schools (grades 6 through 8), two magnet schools (K through 8), two special schools or centers, and an early childhood school. Dr. Devon Horton is the Superintendent of Schools. 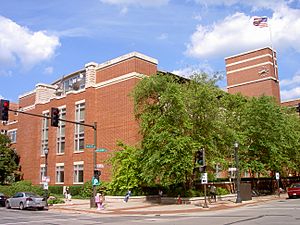 The Evanston Public Library was established in 1873, and has a satellite branch at the Robert Crown Community Center. Karen Danczak Lyons is the Library Director. The North Branch of the Evanston Library was closed in 2021.

In 2006, National-Louis University closed its former main site, which had 6.5 acres (2.6 ha) of land, with about 33% in Evanston; the majority of the land was in Wilmette.

Founded in 1855, Evanston is home to Northwestern University, one of the nation's leading research universities. Located along Lake Michigan, Northwestern's campus spans 240 acres with an estimated 250 buildings. Since 1908, Kellogg School of Management as well as Garrett-Evangelical Theological Seminary (1853) have institutions, of which both share the campus with Northwestern.

All content from Kiddle encyclopedia articles (including the article images and facts) can be freely used under Attribution-ShareAlike license, unless stated otherwise. Cite this article:
Evanston, Illinois Facts for Kids. Kiddle Encyclopedia.