Kids Encyclopedia Facts
For the film of the same name, see Skokie (film).

Skokie ( formerly Niles Center) is a village in Cook County, Illinois, United States. Its name comes from a Potawatomi word for "marsh". A Chicago suburb, for many years Skokie promoted itself as "The World's Largest Village". Its population, according to the 2010 census, was 64,784. Skokie's streets, like that of many suburbs, are largely a continuation of the Chicago street grid, and the village is served by the Chicago Transit Authority, further cementing its connection to the city.

Skokie was originally a German-Luxembourger farming community, but was later settled by a sizeable Jewish population, especially after World War II. At its peak in the mid-1960s, 58% of the population was Jewish, the largest percentage of any Chicago suburb. In recent years, several synagogues and Jewish schools have closed. However, Skokie still has a very large Jewish population. It is home to the Illinois Holocaust Museum and Education Center, which opened in northwest Skokie in 2009.

Skokie has received national attention twice for court cases decided by the United States Supreme Court. In the mid-1970s, it was at the center of a case concerning the First Amendment right to assemble and the National Socialist Party of America, a neo-Nazi group. Skokie ultimately lost that case. In 2001, although Skokie was not a direct party to the case, a decision by the village regarding land use led the court to reduce the power of the United States Environmental Protection Agency. In October 2013, Skokie was rated #71 on America's top 100 places to live on the livability.com website.

According to the 2010 census, Skokie has a total area of 10.06 square miles (26.06 km2), all land. The village is bordered by Evanston to the east, Chicago to the southeast and southwest, Lincolnwood to the south, Niles to the southwest, Morton Grove to the west, Glenview to the northwest, and Wilmette to the north. 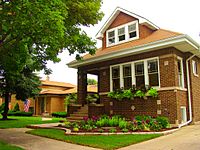 A 1925 "Chicago"-style bungalow in Skokie

In 1888, the community was incorporated as Niles Centre. About 1910, the spelling was Americanized to "Niles Center". However, the name caused postal confusion with the neighboring village of Niles. A village-renaming campaign began in the 1930s. In a referendum on November 15, 1940, residents chose the Indian name "Skokie" over the name "Devonshire".

During the real estate boom of the 1920s, large parcels were subdivided; many two- and three-flat apartment buildings were built, with the "Chicago"-style bungalow a dominant architectural specimen. Large-scale development ended as a result of the Great Crash of 1929 and consequent Great Depression. It was not until the 1940s and the 1950s, when parents of the baby boom generation moved their families out of Chicago, that Skokie's housing development began again. Consequently, the village developed commercially, an example being the Old Orchard Shopping Center, currently named Westfield Old Orchard.

During the night of November 27–28, 1934, after a gunfight in nearby Barrington that left two FBI agents dead, two accomplices of notorious 25-year-old bank-robber Baby Face Nelson (Lester Gillis) dumped his bullet-riddled body in a ditch along Niles Center Road adjoining the St. Peter Catholic Cemetery, a block north of Oakton Avenue in the town.

The first African-American family to move to Skokie arrived in 1961, and open-housing activists helped to integrate the suburb subsequently.

The name of the town was changed from "Niles Center" to "Skokie" by referendum in 1940. "Skokie" had previously been used as the name for the marshland on which much of the town was built; the term "Skokie marsh" was being used by local botanists, notably Henry Chandler Cowles, as early as 1901. Maps long named the Skokie marsh as Chewab Skokie, a probable derivation from Kitchi-wap choku, a Potawatomi term meaning "great marsh".

directly from skoutay or scoti and variant Algonquian words for fire. The reference is to the fact that marshy grasslands, such as occurred in the Skokie region, were burned by the Indians to flush out the game.

In Native Placenames of the United States (U. of Oklahoma Pr, 2004), William Bright lists Vogel's Potawatomi derivation first, but adds reference to the Ojibwa term miishkooki ("marsh") recorded in the Eastern Ojibwa-Chippewa-Ottawa Dictionary (Mouton, 1985), by Richard A. Rhodes.

The 1940 change of name may also have been influenced by James Foster Porter, a Chicago native, who had explored the "Skoki Valley" in Banff National Park in Canada in 1911 and became captivated by the name. Porter supported the name "Skokie" in the referendum when he returned to America.

In 2001, Skokie's decision to use an isolated wetland as a solid waste disposal site resulted in a lawsuit. Ultimately, the case went all the way to the United States Supreme Court, and resulted in an overturn of the federal migratory bird rule. See Solid Waste Agency of Northern Cook Cty. v. Army Corps of Engineers for more information. 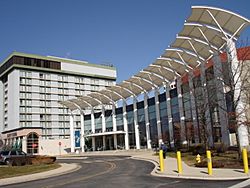 The Skokie Park District maintains public spaces and historical sites within its more than 240 acres (0.97 km2) of parkland and in its ten facilities. The district is a recent winner of the national "Gold Medal for Excellence" in parks and recreation management. Every May since 1991, the park district hosts the Skokie Festival of Cultures to celebrate the village's diverse ethnic composition.

Westfield Old Orchard, an upscale shopping center, is one of the country's first and is the third largest mall by total square footage in Illinois. One of two in the Chicago area of the popular burger chain "Shake Shack" is located there.

Skokie has a sculpture garden that is situated between Dempster Street and Touhy Avenue on the east side of McCormick Boulevard. It was started in 1988 and now has over 70 sculptures. Three areas are toured in May through October of each year, on the last Sunday of the month with a presentation by a docent. Just north of the sculpture garden is a statue to Mahatma Gandhi with five of his famous quotations engraved around the base. This was dedicated on October 2, 2004.

In addition to municipally-managed public spaces, the village is also home to the North Shore Center for the Performing Arts, encompassing Centre East, Northlight Theatre and the Skokie Valley Symphony Orchestra. The facility celebrated its 10th anniversary in 2006.

The Illinois Holocaust Museum and Education Center opened in Skokie on April 19, 2009.

On October 7, 2008, the Skokie Public Library received the 2008 National Medal for Museum and Library Service from First Lady Laura Bush in a ceremony at the White House. The National Medal is awarded annually by the federal Institute of Museum and Library Services, the primary source of federal support for the nation's 122,000 libraries and 17,500 museums, to five libraries and five museums. The library's cultural programming and multilingual services were cited in the award presentation. Skokie Public Library is the first public library in Illinois to be awarded the medal.

Additionally, the Skokie Library also offers a bookmobile service that provides a mini-library around the community.

The 23,223 households comprise: 32.2% with minority-age children (younger than 18 years), 60.5% were cohabiting married couples, 9.9% of households were headed by a woman (with no husband present), and 26.6% were non-family cohabitants, 23.6% were single-person households, and 13.6% included an elder person (65 years of age or older). The average Skokie household size was 2.68 persons, and the average household family size was 3.20 persons.

The Chicago Transit Authority's Yellow Line terminates at the Dempster Street station in Skokie. Construction has been completed on a new Yellow Line train station at Oakton Street, to serve downtown Skokie and environs. It opened April 30, 2012. Additionally, the CTA is commissioning an Alternative Analysis Study on the extension of the Yellow Line terminal to Old Orchard Road for Federal Transit Administration New Start grants. The New Starts program allows federal funds to be used for capital projects provided all solutions for a given problem (i.e., enabling easy transportation for reverse commuters to Old Orchard Mall) is considered. The solution recommended by the CTA is the elevation of the Yellow Line north of Searle Parkway to a rebuilt Dempster Street station, then following abandoned Union Pacific Railroad tracks and the east side of the Edens Expressway to a new terminal south of Old Orchard Road. Currently this solution needs to undergo public commenting as well as FTA and CTA board approval to continue.

Although the Yellow Line is the fastest transportation to and from the city, the village also is served by CTA and Pace bus routes. However, Greyhound Bus service to the Dempster Street train station has been discontinued. For automobile transport, Interstate 94, the Edens Expressway, traverses western Skokie, with interchanges at Touhy Avenue, Dempster Street, and Old Orchard Road.

All content from Kiddle encyclopedia articles (including the article images and facts) can be freely used under Attribution-ShareAlike license, unless stated otherwise. Cite this article:
Skokie, Illinois Facts for Kids. Kiddle Encyclopedia.