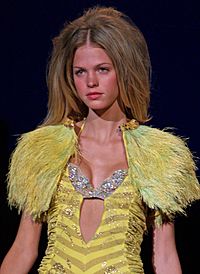 Erin Heather Bubley (born March 4, 1989) is an American model and actress. Heatherton was born in Skokie, Illinois. At the age of 17, Heatherton moved to New York City and signed with the Marilyn Agency.

As of December 2013 Heatherton is ranked No. 15 on Models.com top 25 sexiest models list. In 2013 it was announced that Heatherton had signed with IMG.

All content from Kiddle encyclopedia articles (including the article images and facts) can be freely used under Attribution-ShareAlike license, unless stated otherwise. Cite this article:
Erin Heatherton Facts for Kids. Kiddle Encyclopedia.