Diane von Fürstenberg (born Diane Simone Michele Halfin; 31 December 1946) is a Belgian fashion designer best known for her wrap dress. She initially rose to prominence in 1969 when she married into the princely German House of Fürstenberg, as the wife of Prince Egon von Fürstenberg. Following their separation in 1972 and divorce in 1983, she has continued to use his family name.

Her fashion company, Diane von Furstenberg (DvF), is available in over 70 countries and 45 free-standing shops worldwide, with the company's headquarters and flagship boutique located in Manhattan's Meatpacking District.

She is the past chairwoman of the Council of Fashion Designers of America (CFDA), a position she held from 2006 to 2019 ; in 2014 was listed as the 68th most powerful woman in the world by Forbes; and in 2015 was included in the Time 100, as an Icon, by Time Magazine. In 2016, she was awarded an honorary doctorate from The New School. In 2019, she was inducted into the National Women's Hall of Fame.

Fürstenberg was born Diane Simone Michele Halfin in Brussels, Belgium, to Jewish parents. Her father, Bessarabian-born Leon (Lipa) Halfin, migrated to Belgium in 1929 from Chişinău, and later sought refuge from the Nazis in Switzerland. Her mother was Greek-born Liliane Nahmias, from Thessaloniki, a Holocaust survivor, who was initially captured by the Nazis while she was a member of the Resistance during World War II. 18 months before Fürstenberg was born, her mother was a prisoner at Auschwitz concentration camp. Fürstenberg has spoken broadly about her mother's influence in her life, crediting her with teaching her that "fear is not an option."

Fürstenberg attended a boarding school in Oxfordshire. She studied at Madrid University before transferring to the University of Geneva to study economics. She then moved to Paris and worked as an assistant to fashion photographer's agent Albert Koski. She left Paris for Italy to apprentice to the textile manufacturer Angelo Ferretti in his factory, where she learned about cut, color and fabric. It was here that she designed and produced her first silk jersey dresses. 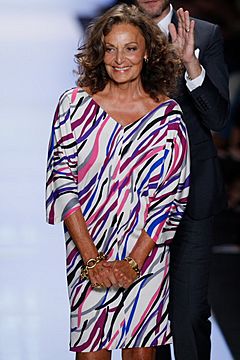 A year after marrying, Fürstenberg began designing women's clothes: "The minute I knew I was about to be Egon's wife, I decided to have a career. I wanted to be someone of my own, and not just a plain little girl who got married beyond her deserts." After the Fürstenbergs separated in 1973, Egon also became a fashion designer. After moving to New York, she met high-profile Vogue editor Diana Vreeland, who declared her designs "absolutely smashing". She had her name listed on the Fashion Calendar for New York Fashion Week, and so her business was created.

In 1974, she introduced the knitted jersey "wrap dress", which became an iconic piece in women's fashion; it is included in the collection of the Costume Institute of the Metropolitan Museum of Art. After the success of the wrap dress, Fürstenberg was featured on the cover of Newsweek magazine in 1976. The accompanying article declared her "the most marketable woman since Coco Chanel." She launched a cosmetic line and her first fragrance, "Tatiana", named after her daughter. The New York Times reported that by 1979 the annual retail sales for the company were $150 million (equivalent to $440 million in 2018).

In 1985, Fürstenberg moved to Paris, France where she founded Salvy, a French-language publishing house. Fürstenberg started a number of other businesses including a line of cosmetics and a home-shopping business, which she launched in 1991. In 1992, Fürstenberg sold $1.2 million (equivalent to $1.8 million in 2018) of her Silk Assets collection in two hours on QVC. She credits the success with giving her the confidence to relaunch her company.

Fürstenberg relaunched her company in 1997, and reintroduced the wrap dress, which gained traction with a new generation of women. In 1998, she published her business memoir, Diane: A Signature Life. In 2004, she introduced the DVF by H. Stern fine jewelry collection, and launched scarves and beachwear. In 2006, she was elected as president of the Council of Fashion Designers of America, a position she still holds. In 2008, she received a star on Seventh Avenue's Fashion Walk of Fame.

In 2009, Michelle Obama wore the DVF signature Chain Link print wrap dress on the official White House Christmas card. That same year, a large-scale retrospective exhibition entitled "Diane von Furstenberg: Journey of a Dress" opened at the Manezh, one of Moscow's largest public exhibition spaces. It was curated by Andre Leon Talley and attracted a lot of media attention. In 2010, the exhibition traveled to São Paulo; and in 2011, to the Pace Gallery in Beijing.

In 2010, Fürstenberg was awarded a gold medal at the annual Queen Sofía Spanish Institute Gold Medal Gala. In 2011, DVF introduced a home collection, and a signature fragrance, DIANE.

In 2012, Fürstenberg launched her first children's collection with GapKids and a denim collaboration with CURRENT/ELLIOTT.

In 2014, Fürstenberg joined the Ban Bossy campaign as a spokesperson advocating leadership roles for girls.

In 2018, the brand banned mohair use after a PETA exposé showed workers killing goats to obtain it. All fur, angora and exotic skins were also banned from future collections.

Fürstenberg is a director of The Diller – von Furstenberg Family Foundation, which provides support to nonprofit organizations in the area of community building, education, human rights, arts, health and the environment. In 2010, the foundation created The DVF Awards, presented annually to four women who display leadership, strength and courage in their commitment to women's causes. In 2011, the foundation made a $20 million commitment to the High Line.

Fürstenberg sits on the board of Vital Voices, a women's leadership organization, and served as one of the project chairs for New York City Mayor Michael Bloomberg's review of the future of NYC's Fashion industry, prepared by New York City Economic Development Corporation.

In 2014, Ovation TV featured The Fashion Fund, a documentary about the CFDA/Vogue Fashion Fund competition. Fürstenberg starred alongside Anna Wintour in the program.

In November 2014, the E! network started airing the first season of reality show House of DVF. Contestants on the show performed various tasks and challenges in the hopes of becoming a global brand ambassador for Fürstenberg. In September 2015, it returned for a second (final) season. 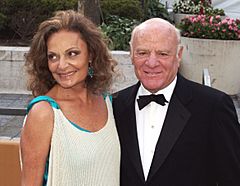 At university, when she was 18, she met Prince Egon von Fürstenberg, the elder son of Prince Tassilo zu Fürstenberg (1903-1987), a German Roman Catholic prince, and his first wife, Clara Agnelli, an heiress to the Fiat automotive fortune and member of the Italian nobility. Married in 1969, the couple had two children, Alexander and Tatiana, who were born in New York City. She is now the grandmother of five, including Talita von Fürstenberg.

The Fürstenbergs' marriage, although unpopular with the groom's family because of the bride's Jewish ethnicity, was considered dynastic, and on her marriage she became Her Serene Highness Princess Diane of Fürstenberg. However, she lost any claim to the title following their separation in 1972 and divorce in 1983.

On 28 February 2020, Fürstenberg was made a Chevalier de la Légion d'honneur for her contributions to fashion, women's leadership, and philanthropy. She was presented the award by Christine Lagarde, president of the European Central Bank, in a ceremony at the Ministry of Europe and Foreign Affairs headquarters on the Quai d'Orsay.

Details of her ancestry were included in the episode "Fashion's Roots" (season 6, 13 October 2020), of the PBS series Finding Your Roots.

All content from Kiddle encyclopedia articles (including the article images and facts) can be freely used under Attribution-ShareAlike license, unless stated otherwise. Cite this article:
Diane von Fürstenberg Facts for Kids. Kiddle Encyclopedia.