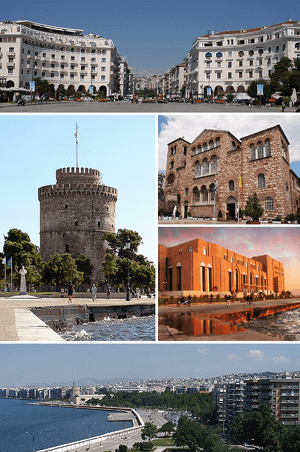 Thessaloniki is the second-largest city in Greece after Athens. There were 325,182 people at the census of 2011. Including the suburbs, there were 1,110,312 people. It is in the region of Macedonia in northern Greece. It is the capital of the Thessaloniki prefecture and it is the capital of the periphery of central Macedonia. It is the largest city in the geographical region of Macedonia. It has a humid subtropical climate (Cfa in the Köppen climate classification). The average rainfall is relatively low, due to the rain shadow from the Pindos mountains. Unlike in Athens, there are frequent frosts and snow every winter.

From late antiquity to the late Middle Ages (330AD-1430AD) it was the second most important city of Byzantine Empire. Then Thessaloniki faced many invasions from enemies such as the Avaroi, Bulgars and others. In the year 1204, the crusaders conquered Thessaloniki and created the Kingdom of Thessalonica. Later it was liberated by Byzantines and then sold to the Republic of Venice but the year 1430, it was conquered by the Ottoman Empire.

Thessaloniki was a part of Ottoman Empire for approximately 500 years and in 1912 it became part of Greece when Greece acquired Macedonia following the Balkan Wars. Many famous people have lived or were born here, such as the Roman statesman and philosopher Cicero, many saints like Cyril and Methodius, who invented the Cyrillic alphabet, and Saint Demetrius, who is the patron saint of the city, and many politicians, such as the founder of modern-day Turkey, Mustafa Kemal Atatürk. Most of the city was completely destroyed in a large fire in 1917 and was rebuilt in the 1920s. Thessaloniki was place to both the Salonica and Macedonian fronts during World War 1, this fronts were made of French, Serbian, English, Italian, and a Russian division. This fronts were key in 1918 to the Entente victory over both Bulgaria and Austria. It was later occupied by Nazi Germany during the Second World War, during the Greek Invasion.

Thessaloniki has many sights. The most famous sight in Thessaloniki is the white tower. The White tower was a part of Thessaloniki's ancient walls that were built many times through the ages. Thessaloniki was the second-most well-fortified city in the Byzantine Empire, after Constantinople (Istanbul). The walls can still be seen above the city today and despite the many earthquakes, they are still standing. The city was home to a Roman imperial palace and mausoleum. The palace ruins can be seen today but the mausoleum together with a Roman arch can be still seen standing today. Very important sights of Thessaloniki are the medieval churches such as Agios Dimitrios, Agios Georgios and Agia Sofia. Agios Dimitrios it the largest and oldest Basilica in Greece. Thessaloniki's Christian monuments are part of the UNESCO World Heritage initiative. The city also has many Ottoman monuments, such as the Bey Hammam and the old district of the city near the walls, with its distinctly Turkish architecture. Many museums are in the city and some of them are: Archaeological Museum of Thessaloniki, Museum of the Macedonian Struggle, Jewish Museum, Ethnological Museum of Macedonia and others.

Thessaloniki is known throughout Greece and the countries nearby as a city with a great nightlife even in winter, when most famous Greek tourist destinations are closed. It is also widely considered the Greek city of love due to its many romantic streets and alleys.

All content from Kiddle encyclopedia articles (including the article images and facts) can be freely used under Attribution-ShareAlike license, unless stated otherwise. Cite this article:
Thessaloniki Facts for Kids. Kiddle Encyclopedia.