Shenyang or Mukden is the capital and largest city of Liaoning Province in northeast China. Shenyang was first used by the Manchu people as their capital in the 17th century. Today it is the biggest city in the Northeast.

Shenyang is the transport and commercial hub of China's northeast–particularly with Japan, Russia, and Korea. Shenyang is the railway hub of northeast China. Eight railways connect Shenyang with Beijing, Dalian, Changchun, Harbin and Fushun.

The city’s name means "the city to the north of Shen River". It comes from the Hun River on the city’s south side, which used to be called the Shen River. People started living here 7,200 years ago. 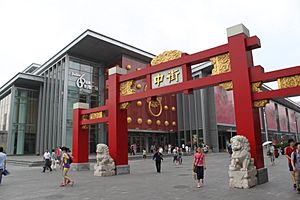 The arch entrance of Middle (Zhongjie) Street, a 3.5 km-long pedestrian shopping strip in central Shenyang beside Mukden Palace, and is the longest shopping street in China.

Many major industrial companies have their headquarters in Shenyang. Brilliance Auto is a major Chinese automobile manufacturer. Most of its production plants are also in Shenyang. Shenyang Aircraft Corporation makes airplanes for civilian use as well as for the PLAAF. Neusoft Group is the biggest software company in China. Shenyang Machine Tool Group is the largest machine tool manufacturer in China. Tyco International, General Motors, and Michelin Shenyang Tire Corporation, are expanding their operations in Shenyang due to a deep pool of skilled technical labor; good transportation; low land-use fees; and solid local support. 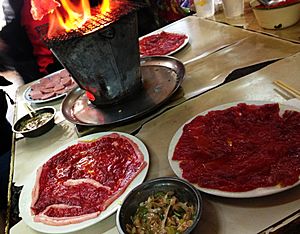 Shenyang has classic northeastern Chinese cuisine. Traditional meals in the region are suan cai (also called Chinese sauerkraut), stewed chicken and mushroom, and meat pie. Korean food, such as rice cake (Hangul: 떡; RR: tteok) and cold noodle (Hangul: 냉면; Hanja: 冷麵; RR: naengmyeon; Chinese: 冷面; pinyin: Lěng Miàn), is a part of Shenyangers' diet as there is a sizeable ethnic Korean population in the city. Also, as the area was traditionally occupied by Manchus, the cuisine in Shenyang was fundamentally influenced by Manchu food, as well as the famous Manchu Han Imperial Feast.

Due to the sizeable Hui population in Shenyang, halal foods are a common and also enjoyed by non-Muslim people.

Shenyang Sport University is a famous professional sports university in China. The university is the training base for winter sports in China and has many Olympic champions.

Shenyang is twinned with:

All content from Kiddle encyclopedia articles (including the article images and facts) can be freely used under Attribution-ShareAlike license, unless stated otherwise. Cite this article:
Shenyang Facts for Kids. Kiddle Encyclopedia.