Pittsburg is an industrial city in Contra Costa County, California. The population was 63,264 at the 2010 census. It is located on the southern shore of the Suisun Bay in the East Bay region of the San Francisco Bay Area.

In 1849, Colonel Jonathan D. Stevenson (from New York) bought the Rancho Los Medanos land grant, and laid out a town he called New York of the Pacific. By 1850, this venture failed. With the discovery of coal in the nearby town of Nortonville, California, the place became a port for coaling, and adopted the name Black Diamond, after the mining firm that built the Black Diamond Coal Mining Railroad from there to Nortonville. Because of the industrial potential of the site, a name change to Pittsburg was proposed in 1909.

Pittsburg, originally settled in 1839, was called first "New York Landing", then "Black Diamond", before citizens voted on "Pittsburg" on February 11, 1911. The name was selected to honor Pittsburgh, Pennsylvania, as the two cities' shared a common steel and mining industrial heritage. However, from 1891 to July 1911, Pittsburgh, PA was officially known as "Pittsburg", following a country-wide standardization of geographical names by the United States Board on Geographic Names. Hence, in February 1911, when Pittsburg, CA adopted it name, the 'h' was absent from its namesake city. Five months later, after an appeals process lasting almost two decades, Pittsburgh, Pennsylvania won a rare reversal and the 'h' was restored to the city's official name, which persists to this day, resulting in the spelling difference.

The original town site fronts on the Sacramento/San Joaquin River Delta, reflecting its origins as a deep water channel river port. (As of January 1, 2007, state legislation [Assembly Bill 2324] enabled the city to manage its own riverfront for commercial development and subsequent port operations). Since the early 1900s, the city has grown inland to the south, then spread east and west along State Route 4, now a freeway carrying resident commuters to jobs in the San Francisco Bay-Oakland Region. In the process, the former town of Cornwall, California was absorbed. The city has enjoyed continued residential redevelopment growth near its northern boundary, as well as ongoing construction of major subdivisions in the southwest hills, including San Marco Villas. As of the 2000 census, the city had a total population of 56,769.

Camp Stoneman, located in the area, was a major staging area for the United States Army during World War II and the Korean War.

The post office first opened in 1868 as Black Diamond, and changed its name with the town's in 1911.

During the early 1900s, many Sicilian fishermen from Isola delle Femmine near Palermo settled in what will be Pittsburg. 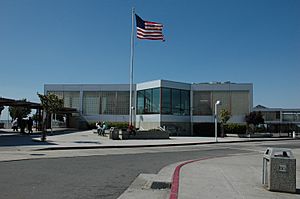 The city has one BART station, the Pittsburg/Bay Point Station located in Pittsburg near Bay Point. eBART will extend rail service further into the city via DMU train with a Railroad Avenue station. Tri Delta Transit provides bus service in the area. California State Route 4 bisects the city from west to east.

The Pittsburg Delta View Golf Course has a back nine originally built in 1947, and a front nine completed in 1991.

The Pittsburg Diamonds, an independent professional baseball team, began play as a member of the Pacific Association of Professional Baseball Clubs in 2014. The team plays its home games in City Park Field #1.

There were 17,741 households out of which 42.2% had children under the age of 18 living with them, 52.5% were married couples living together, 17.2% had a female householder with no husband present, and 24.0% were non-families. 18.0% of all households were made up of individuals and 5.8% had someone living alone who was 65 years of age or older. The average household size was 3.17 and the average family size was 3.59.

All content from Kiddle encyclopedia articles (including the article images and facts) can be freely used under Attribution-ShareAlike license, unless stated otherwise. Cite this article:
Pittsburg, California Facts for Kids. Kiddle Encyclopedia.