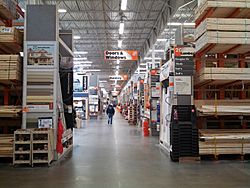 The Home Depot (or Home Depot) is a company in the United States. It sells things for people to improve their homes and build things. It has over 2,000 stores. The Home Depot's main office is in Atlanta, Georgia.

The Home Depot makes more money than any other home improvement store. It is the fourth largest store in general. The stores are very big, with high ceilings, like a warehouse. They are usually 105,000 square feet. (9,755 square meters). The biggest Home Depot is 225,000 square feet. It is in Union, New Jersey.

Bernard Marcus, Arthur Blank, Ron Brill and Pat Farrah founded The Home Depot in 1978. They wanted to have warehouses to sell home-improvement tools and materials. A banker named Ken Langone helped them get enough money.

The first two stores opened in 1979 in the city of Atlanta. The first headquarters was on Terrell Mill Road in Marietta, Georgia.

In the 1990s, The Home Depot moved its headquarters to some skyscrapers near the town of Vinings, Georgia.

Robert Nardelli quit being CEO on January 3, 2007. He quit because of controversy about how much money he makes. Then, Frank Blake become the new CEO.

All content from Kiddle encyclopedia articles (including the article images and facts) can be freely used under Attribution-ShareAlike license, unless stated otherwise. Cite this article:
Home Depot Facts for Kids. Kiddle Encyclopedia.