Waterloo, Ontario is a city in Southern Ontario, Canada. It is very close to the city of Kitchener, Ontario. Kitchener and Waterloo are often referred to together as "Kitchener-Waterloo", or "KW". They are sometimes called "the Tri-City" (to include the City of Cambridge). All three have separate city governments.

The University of Waterloo and Wilfred Laurier University are in Waterloo. The headquarters of mobile phone maker BlackBerry is there. 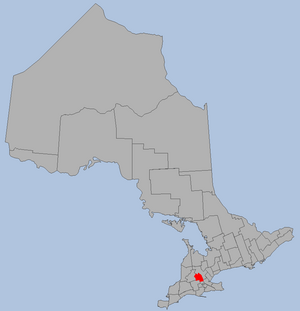 Waterloo has a population of 97,475 (as of 2006). University of Waterloo is marked the 4th best university in Canada. (Wilfred Laurier is 30th)

All content from Kiddle encyclopedia articles (including the article images and facts) can be freely used under Attribution-ShareAlike license, unless stated otherwise. Cite this article:
Waterloo, Ontario Facts for Kids. Kiddle Encyclopedia.