Oracle Corporation is an American company. It makes hardware systems and enterprise software (software for businesses) such as database management systems. Its headquarters are in Redwood City, California, United States. The founder is Lary Ellison. In 2010, it employed 105,000 people worldwide. It has increased in size through natural growth and by buying other companies. By 2007 Oracle had the third-largest software revenue, after Microsoft and IBM.

In January 2010 it bought Sun Microsystems.

As of 2013[update], Larry Ellison, a co-founder of Oracle Corporation, has served as Oracle's CEO throughout its history. He also served as the Chairman of the Board until his replacement by Jeffrey O. Henley in 2004. On August 22, 2008 the Associated Press ranked Ellison as the top-paid chief executive in the world. 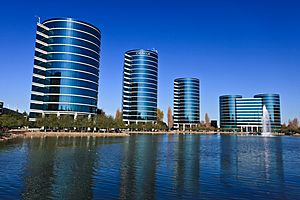 When the company started, computer database technology was only starting. Ellison had read a 1970 paper written by Edgar F. Codd on relational database management systems (RDBMS). He had also heard about the IBM System R database from an article in the IBM Research Journal by Ed Oates. System R was also based on Codd's theories. Ellison wanted to make Oracle's product compatible with System R, but IBM stopped this by keeping the error codes for their DBMS (DataBase Management System) secret. Ellison co-founded Oracle Corporation in 1977 with Bob Miner and Ed Oates under the name Software Development Laboratories (SDL). In 1979 SDL changed its name to Relational Software, Inc. (RSI). In 1982, RSI renamed itself Oracle Systems to make the relation to its main product, Oracle Database, clearer. At this stage Bob Miner was the company's senior programmer. In 1995, Oracle Systems Corporation changed its name to Oracle Corporation.

Part of Oracle Corporation's early success came from using the C programming language to install its products. This made changing the setup to different operating systems (most of which support C) easier.

All content from Kiddle encyclopedia articles (including the article images and facts) can be freely used under Attribution-ShareAlike license, unless stated otherwise. Cite this article:
Oracle Corporation Facts for Kids. Kiddle Encyclopedia.