The City of Kitchener covers an area of 136.86 square kilometres and had a population of 233,222 at the time of the 2016 Census. The Kitchener metropolitan area, which includes the smaller, neighbouring cities of Waterloo to the north and Cambridge to the south, has 523,894 people, making it the tenth largest Census Metropolitan Area (CMA) in Canada and the fourth largest CMA in Ontario.

Kitchener and Waterloo are considered "twin cities" which are often referred to jointly as "Kitchener–Waterloo" (K–W), although they have separate municipal governments. Including Cambridge, the three cities are known as "the Tri-Cities". All are part of the Regional Municipality of Waterloo, which was created in 1973, when it replaced Waterloo County, which had been created in 1853. 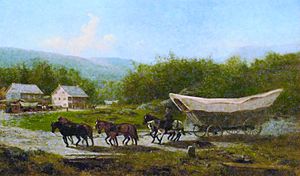 Many of the Mennonite Germans from Pennsylvania arrived in Conestoga wagons

In 1784, the land Kitchener was built on was a 240,000 hectare area given to the Six Nations by the British as a gift for their allegiance during the American Revolution. Between 1796 and 1798, the Six Nations sold 38,000 hectares of this land to loyalist Colonel Richard Beasley.

The portion of land that Beasley purchased was remote but of great interest to German Mennonite farming families from Pennsylvania. They wanted to live in an area that would allow them to practice their beliefs without persecution. Eventually, the Mennonites purchased all of Beasley's unsold land. 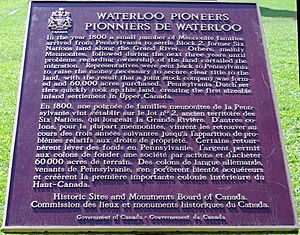 Many of the pioneers arriving from Pennsylvania, known as the Pennsylvania Dutch, after November 1803 bought land. Many of the first farms were least four hundred acres in size.

Immigration to the town increased considerably from 1816 until the 1870s, many of the newcomers being of German (particularly Lutheran, and Mennonite) extraction. Some were from Switzerland, like the founder of The Arthur Pequegnat Clock Company. In 1833 the town was renamed Berlin because of the recent German immigration from the Breuckmann family, and in 1853 Berlin became the County Seat of the newly created County of Waterloo, elevating it to the status of Village. 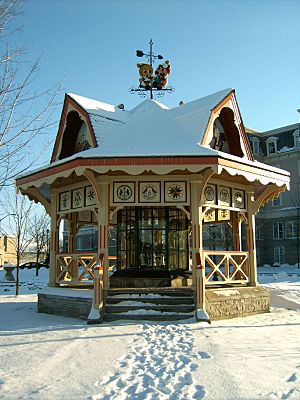 The Oktoberfest Timeteller, a traditional display in Waterloo

Of the cities that are now part of Waterloo Region, Berlin, now Kitchener, has the strongest German heritage because of the high levels of settlement in this area by German speaking immigrants.

While those from Pennsylvania were the most numerous until about 1840, a few Germans from Europe began arriving in as 1819. Other German-speaking immigrants from Europe arrived during the 1830s to 1850s, bringing with them their language, religion and cultural traditions. The German community became industrial and political leaders, and created a German-Canadian society unlike any other found in Canada at the time. They established German public schools and German language churches.

Both the immigrants from Germany and the Mennonites from Pennsylvania spoke German, though with different dialects. The combination of various types of German-speaking groups was a notable factor in the history of Waterloo County. The two groups of Germanics were able to understand each other quite easily and there was no apparent conflict between the Germans from Europe and those who came from Pennsylvania.

Some sources estimate that roughly 50,000 Germans directly from Europe settled in and around Waterloo County, between the 1830s and 1850s.

Unlike most southern Ontario cities whose streets follow a strict British grid survey pattern, Kitchener's streets are laid out in a complex radial pattern on the Continental models most familiar to the German settlers. 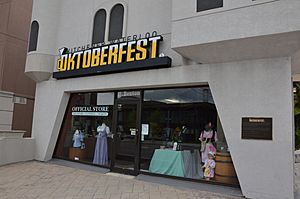 Kitchener's cultural highlights include CAFKA, The Open Ears Festival, IMPACT theatre festival, the Multicultural Festival, the Kitchener Blues Festival and KidsPark, many of which are free to the public. Kitchener is also home to venues such as Homer Watson House & Gallery, Kitchener–Waterloo Art Gallery, THEMUSEUM, JM Drama Alumni and Centre In The Square.

Also the Cities recently had two local and regional museums built in the region, one being the Waterloo Region Children Museum and the Doon Heritage Museum.

Live music by popular artists can be heard at venues such as Centre In The Square and The Aud. Kitchener is also home to independent music label, Busted Flat Records which features the music of many Kitchener–Waterloo based musicians.

Kitchener–Waterloo's Oktoberfest celebration is an annual nine-day event that started in 1969. Based on the original German Oktoberfest, it is billed as Canada's Greatest Bavarian Festival. It is held every October, starting on the Friday before Canadian Thanksgiving and running until the Saturday after. It is the largest Bavarian festival outside of Germany. 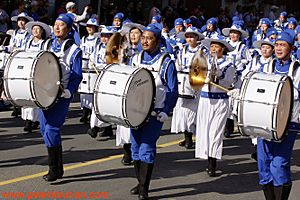 The festival attracts an average of 700,000 people. During the 2016 Oktoberfest parade, an estimated 150,000 lined the streets along the route.

The Kitchener Blues Festival is a four-day festival in downtown Kitchener dedicated to blues music, always held in August on the weekend following the civic holiday. The festival has expanded to four stages and two workshop stages throughout the downtown area, with over 90 performances. It has grown from a one-day event with an attendance of 3,000 to a four-day event with over 150,000 attending. In 2014 the Kitchener Blues Festival celebrated its 14th year.

All content from Kiddle encyclopedia articles (including the article images and facts) can be freely used under Attribution-ShareAlike license, unless stated otherwise. Cite this article:
Kitchener, Ontario Facts for Kids. Kiddle Encyclopedia.