Joseph Thomas Logano (born May 24, 1990), nicknamed "Sliced Bread," is an American professional stock car racing driver. He currently competes full-time in the Monster Energy NASCAR Cup Series, driving the No. 22 Ford Fusion for Team Penske, and part-time in the NASCAR Xfinity Series, driving the No. 12 and No. 22 Ford Mustangs for Team Penske. His Penske contract extends through the 2022 season. He previously drove the No. 20 Toyota Camry for Joe Gibbs Racing from 2008 to 2012, collecting two wins and 41 Top 10 finishes. Logano's first major NASCAR win came during the Meijer 300 at Kentucky Speedway in just his third start in the 2008 Nationwide Series. 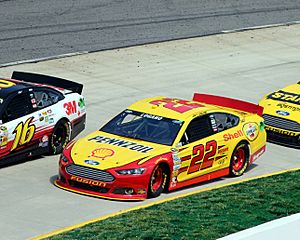 On November 13, 2013, Logano announced his engagement to childhood sweetheart Brittany Baca. He announced, via Twitter, that their wedding date was set for December 2014, during the NASCAR off-season. Logano and Baca were married on December 13, 2014. The couple had their first child, a son, on January 5, 2018.

All content from Kiddle encyclopedia articles (including the article images and facts) can be freely used under Attribution-ShareAlike license, unless stated otherwise. Cite this article:
Joey Logano Facts for Kids. Kiddle Encyclopedia.