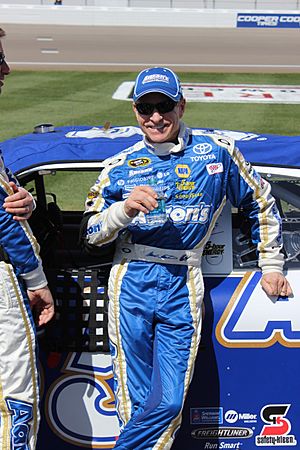 Mark Martin with his Race car

Mark Anthony Martin (born January 9, 1959) is a NASCAR driver who was driving at the beginning of 2013 for Michael Waltrip Racing in the #55 55 Aaron's Toyota but until the end of the year the #14 Chevrolet SS. Mark is often called the best driver to never have won a Sprint cup championship. Martin won five International Race of Champions (IROC) series championships.

All content from Kiddle encyclopedia articles (including the article images and facts) can be freely used under Attribution-ShareAlike license, unless stated otherwise. Cite this article:
Mark Martin Facts for Kids. Kiddle Encyclopedia.