Batesville is the county seat and largest city of Independence County, Arkansas, United States, 80 miles (183 km) northeast of Little Rock, the state capital. According to the 2010 Census, the population of the city was 10,268. The city serves as a regional manufacturing and distribution hub for the Ozark Mountain region and Northeast Arkansas. 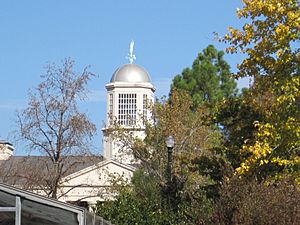 Batesville is the second oldest municipality in the state of Arkansas, after Georgetown. It was named for the first territorial delegate from Arkansas to the Congress of the United States, James Woodson Bates, who settled in the town. The town has also gone by the names of Napoleon and Poke Bayou.

The first known settlement of the Batesville area was in 1810 near the mouth of Polk Bayou, and by 1819 the town had a ferry across the White River and about a dozen houses. The town was partially laid out in early 1821, and on March 3, 1822 a bill of assurrance was recorded and executed and the town's plat was laid out. Batesville became the county seat in 1821. In January 1822, Judge Richard Searcy opened the town's first state circuit court. The town's first post office was established in 1822, and in 1830 became the home of a county court. On 25 September 1836, shortly after Arkansas was granted its statehood, Governor Conway incorporated Batesville Academy, the state's first academy. In the past, the area in and around the city had extensive quarries of manganese ore, phosphate rock, sandstone, limestone, and marble.

Batesville currently has only one high school within the city limits, Batesville High School. Also, Batesville is the home of Lyon College, a private liberal arts college affiliated with the Presbyterian Church (U.S.A.), and noted for the annual Arkansas Scottish Festival each spring. In addition, the city is home to the University of Arkansas Community College at Batesville (UACCB), and NASCAR driver Mark Martin. It contains three National Register Historic Districts and many properties separately listed on the National Register of Historic Places. It was listed in Norman Crampton's 1992 book The 100 Best Small Towns in America, ranking at #75.

The climate in this area is characterized by hot, humid summers and generally mild to cool winters. According to the Köppen Climate Classification system, Batesville has a humid subtropical climate, abbreviated "Cfa" on climate maps.

All content from Kiddle encyclopedia articles (including the article images and facts) can be freely used under Attribution-ShareAlike license, unless stated otherwise. Cite this article:
Batesville, Arkansas Facts for Kids. Kiddle Encyclopedia.