The track is billed as the "World's Fastest Quarter Mile Oval." The current track record was set by Jeff Bloom in a 410 extreme winged sprint car on August 21, 2010 at a time of 9.908 seconds. This is the first lap record under 10 seconds on a quarter mile oval track of any type, breaking Anderson Speedway's 10.28 second lap record. Bloom's lap eclipsed the track record set by USAC midget car driver Tracy Hines on May 17, 2008 at an elapsed time of 10.845 seconds. The lap was the fastest ever midget car lap on an asphalt quarter mile track. He eclipsed the long-standing mark of 11.095 seconds set by Tony Strupp's late model on June 12, 1994.

The track opened in 1948 and continued with a clay surface through the 1973 season. When it opened for the 1974 season, it was an asphalt, high-banked oval, as it remains to this day. In 1974 and 1975, the premier division was supermodifieds, and the first track champion of the paved track was Larry Ninneman. In 1976, the track featured late-model stock cars as its premier division, and it remains so. It also had a paved "X" infield added in the late 1970s, allowing for figure 8 racing at the end of the weekly Sunday night race events.

There are seven divisions running for points in a weekly program:

Notable drivers to appear at the track 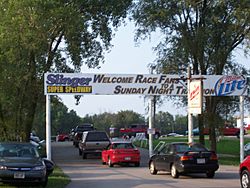 The track's biggest race of the year is the Slinger Nationals. The 200 lap super late model stock car race occurs in the middle of summer. The winner wins the Larry Detjens Memorial Trophy, which was named for the 1980 winner who died in a racing incident at another Wisconsin track later in the season.

The event is usually held on a Tuesday night in order for the nationally and regionally known drivers to participate in the Nationals. NASCAR stars frequently come to the circuit for a one time drive in a local car owner's car in the signature race. Non-local NASCAR drivers frequently race in the event. The 1987 event featured Davey Allison, his father Bobby Allison, Dale Earnhardt, Alan Kulwicki, Mark Martin, Ted Musgrave, and Butch Miller. Kenseth was already a Cup regular when he won his second Nationals in 2002. Three Roush Racing drivers, one from each of the three national series, raced in 2006. The 2007 event had ten drivers with experience in at least one of the three major NASCAR series: Matt Kenseth, Kyle Busch, Erik Darnell, Dick Trickle, Rich Bickle, Scott Wimmer, Chris Wimmer, Lowell Bennett, Kelly Bires, and Brad Mueller. Other notable drivers who have raced in the Slinger Nationals include Neil Bonnett, Harry Gant, Ernie Irvan, Dale Jarrett, Sterling Marlin, Kyle Petty, Rusty Wallace, Ken Schrader and Michael Waltrip.

All content from Kiddle encyclopedia articles (including the article images and facts) can be freely used under Attribution-ShareAlike license, unless stated otherwise. Cite this article:
Slinger Speedway Facts for Kids. Kiddle Encyclopedia.