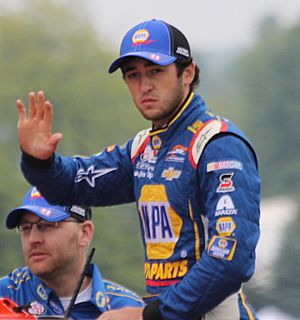 Chase Elliott is a professional NASCAR driver. In 2016, he replaced Jeff Gordon as the driver of the #24 car for Hendrick Motorsports. He is the son of NASCAR hall of famer Bill Elliott. He won the 2014 NASCAR XFINITY Series Championship.

All content from Kiddle encyclopedia articles (including the article images and facts) can be freely used under Attribution-ShareAlike license, unless stated otherwise. Cite this article:
Chase Elliott Facts for Kids. Kiddle Encyclopedia.