Busch is the younger brother of 2004 NASCAR Nextel Cup Series champion Kurt Busch. He also currently holds several records in NASCAR competition, including the most race wins in a season across the top three NASCAR series, with 24 wins, which he accomplished in 2010. He holds the record for most all-time wins in all three of NASCAR's national touring series with 207 (as of September 7, 2019). Furthermore, he holds the record for the most Xfinity Series wins in a season with 13 in 2010, and the most overall with 96.

Busch also holds the record for most overall wins in the Gander Outdoor Truck Series with 56. As of 2019, he is the only driver in history to have 50+ wins in NASCAR's top 3 series. At Dover on May 6, 2019, he tied the record of consecutive top ten finishes to start a season by tying Morgan Shepherd with 11.

At age 19 years and 317 days, Busch became NASCAR's youngest ever pole winner in a Cup Series race at California Speedway in 2005. He's the youngest driver to qualify for the Chase for the Sprint Cup, in 2006. Furthermore, Busch became the first driver to win a race and a championship in a Toyota in the Monster Energy NASCAR Cup Series, winning at Atlanta Motor Speedway during the 2008 season and the 2015 Cup Series championship. Additionally, he is the only driver to win four straight spring races at Richmond International Raceway (2009–2012), and was also the inaugural winner of the first Cup Series race at Kentucky Speedway, in 2011.

Busch, who began his NASCAR career in 2003, is one of only five drivers that have won a championship in both the Sprint Cup Series and the Xfinity Series, and in 2005 became the 14th of only 28 drivers to win a race in each of NASCAR's three national series.

When Busch won the 2009 Crown Royal Presents the Russell Friedman 400 at Richmond International Raceway as he turned 24, he was the second of just three people to ever win on their birthday. His team, Kyle Busch Motorsports, became the first Camping World Truck Series team to win the owners' championship in its first year after recording 8 wins, 16 top 5, and 21 top 10 finishes in 2010. 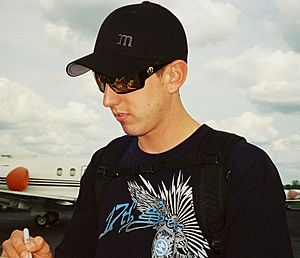 Busch was born in Las Vegas, Nevada. His first driving lessons came at the age of six when he drove around the cul-de-sac of his family's Las Vegas neighborhood in a makeshift go-kart. Although he could not reach the throttle, Busch still was able to pick up the basics from his father Tom, who controlled the gas pedal as Busch drove the vehicle. Busch worked in the family garage with his father and older brother Kurt as he grew, becoming crew chief for his brother's dwarf car team at age ten. 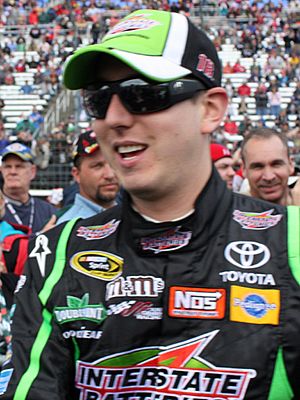 Busch began his driving career in 1998, shortly after his 13th birthday; from 1999 through 2001, Busch won over 65 races in legends car racing, winning two track championships at the Las Vegas Motor Speedway Bullring short-track, before moving to late models; Busch scored ten victories in late model competition at the Bullring during the 2001 season.

At the age of 16, Busch began competing in the NASCAR Craftsman Truck Series (now Camping World Truck Series), driving the No. 99 Ford for Roush Racing. He made his debut at Indianapolis Raceway Park, posting a 9th-place finish in his first race in the series. In his second race at Chicago Motor Speedway, he was leading until his truck ran out of fuel with 12 laps to go. 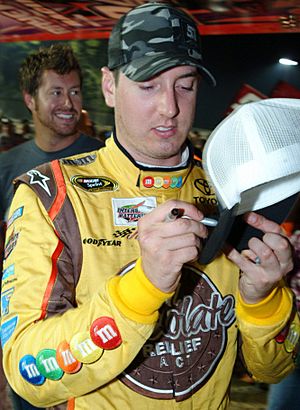 Busch was the fastest in practice for a 2001 Craftsman Truck Series race at California Speedway in Fontana, CA, when he was informed he was not allowed to participate in events at the track, due to the fact that the CART FedEx Championship Series, running at the track the same weekend had its race sponsored by Marlboro cigarettes. Busch was decreed ineligible to compete due an interpretation of the Master Settlement Agreement of 1998, prohibiting people under 18 years of age in participating in events sponsored by tobacco companies. Busch competed in a total of six races in the Truck Series in 2001.

In 2002, Busch graduated a year early with honors from Durango High School in Las Vegas, Nevada to focus on his driving career. That same year, he made his debut in the ARCA RE/MAX Series at Lowe's Motor Speedway, finishing twelfth in the No. 22 Chevrolet for WP Motorsports. 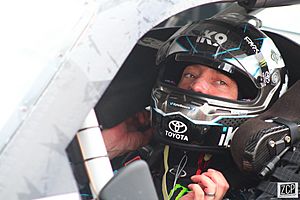 In 2006, Busch founded the Kyle Busch Foundation following a visit to the St. John's Home in Grand Rapids, Michigan. According to the Foundation, "The Kyle Busch Foundation is dedicated to providing essential tools for less fortunate children throughout the country.". Busch also has personal sponsorship deals in place with Monster Energy and Electric Visual, with both appearing on his late model at one time or another.

During the 2008 season, Busch announced the "Kyle's Miles" program in association with Pedigree to help dogs in shelters and breed rescue organizations.

After Busch's first Cup Series win at California on September 4, 2005, he and car owner Rick Hendrick donated their winning shares from that race to the American Red Cross to help benefit those in need after Hurricane Katrina. Because of this, Busch had an appearance on The Oprah Winfrey Show, which during the interview he announced the donations, which gained huge public attention and praise. 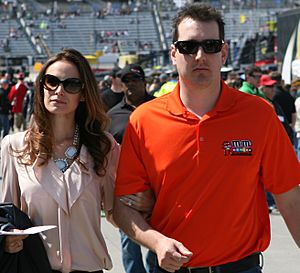 Busch and wife Samantha in April 2013

Kyle Busch married Samantha Sarcinella on December 31, 2010 in Chicago, which was featured in an hour special on Style Network. Sarcinella is a native of St. John, Indiana, and a graduate of Purdue University with a psychology degree. Their son was born in 2015.

He is often nicknamed "Shrub", as the younger brother of Kurt Busch, a small bush being called a shrub. Busch also uses the nickname "Rowdy", after Days of Thunder character Rowdy Burns.

All content from Kiddle encyclopedia articles (including the article images and facts) can be freely used under Attribution-ShareAlike license, unless stated otherwise. Cite this article:
Kyle Busch Facts for Kids. Kiddle Encyclopedia.