Busch has also driven for Stewart-Haas Racing, Furniture Row Racing, Phoenix Racing, Penske Racing, and Roush Racing in his Cup career, which began in 2000. The winner of thirty Cup career races, Busch was driving for Roush Racing when he won the 2004 NASCAR Nextel Cup Series championship.

With a 2006 win in the Busch Series, Busch became one of only 31 drivers to win races in all three of NASCAR's top divisions: the Cup Series, the Xfinity Series, and the Camping World Truck Series. Busch is also a Daytona 500 winner, accomplishing the feat in 2017. 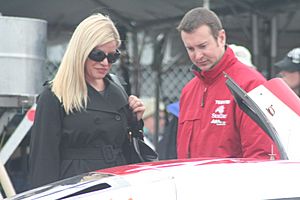 Busch with his former wife, Eva

Busch was born in Las Vegas, Nevada. At the age of six, Busch was accompanying his father to the track and driving go-carts himself. As an underage teenager, he competed in Dwarf competition winning in just his second race, at the Las Vegas Speedway Park. This father and son team competed western tracks from Southern California to Utah.

In 1994, his first full year as a driver, Busch won ten consecutive races at ten different tracks. His father eventually sold their dwarf equipment and purchased a powerful car for the Legends Series, which Busch began driving in 1996 at age 18.

After graduating at Durango High School, Busch enrolled at the University of Arizona, hoping to earn a degree in Pharmacy.

Busch became engaged to girlfriend Eva Bryan while attending the 2005 Hungarian Grand Prix. On July 27, 2006, three years to the day of them meeting on a blind date, they were married in Virginia. The footage was taped and later aired on national television. Busch and Eva Bryan filed for divorce in June 2011 and were legally separated later that month.

Busch is also an avid baseball fan and stated the goal of visiting every ballpark nationwide. His favorite baseball team is the Chicago Cubs. 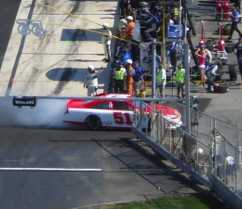 His younger brother Kyle Busch also competes full-time in the Cup Series, also, driving the No. 18 Camry. He is the 2015 Sprint Cup champion and runs part-time in both the Xfinity Series and Camping World Truck Series.

In October 2014 at Martinsville, Busch was introduced to polo player Ashley Van Metre by her sister, who was also a friend of Busch. The two eventually began dating, and Busch announced their engagement on August 26, 2015. They were married on January 7, 2017.

As of August 2019, Busch and his wife star on CMT's Racing Wives reality tv show.

All content from Kiddle encyclopedia articles (including the article images and facts) can be freely used under Attribution-ShareAlike license, unless stated otherwise. Cite this article:
Kurt Busch Facts for Kids. Kiddle Encyclopedia.