Kevin Michael Harvick (born December 8, 1975), nicknamed "The Closer”, “The Bridesmaid”, and “Happy Harvick,” is an American professional stock car racing driver. He currently competes full-time in the Monster Energy NASCAR Cup Series, driving the No. 4 Ford Mustang for Stewart-Haas Racing. Harvick is the former owner of Kevin Harvick Incorporated, a race team that fielded cars in the Xfinity and Camping World Truck Series between 2004 and 2011. He is the 2014 NASCAR Sprint Cup Series champion and a two-time Xfinity Series champion. Harvick holds the all-time record for Cup Series wins at Phoenix International Raceway with nine wins. Harvick is also the third winningest driver in Xfinity Series history with 47 wins.

Harvick, who began his NASCAR career in 1995, is the third of only five drivers that have won a championship in both the Sprint Cup Series and the Xfinity Series, and the fifth of only thirty-one drivers to win a race in each of NASCAR's three national series with over 100 race wins across three national divisions. Harvick also won the 1998 Winston West Series title with five wins that season. 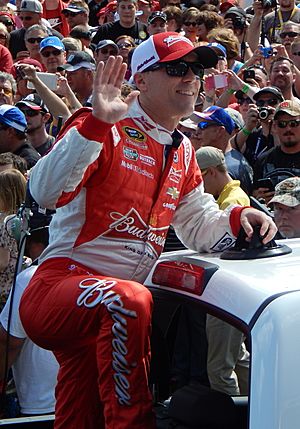 Harvick was born in Bakersfield, California and has a younger sister. Harvick began kart racing at an early age, after his parents bought him a go-kart as a kindergarten graduation gift in 1980. Over the next decade Harvick achieved considerable success on the go-kart racing circuit, earning seven national championships and two Grand National championships. In 1992, he started racing late models part-time in the NASCAR Featherlite Southwest Series and he competed there while still in high school. While in 5th grade Harvick gave a glimpse of his future career plans when he completed a class project poster listing his goals as competing in NASCAR and racing at the Indy 500.

Harvick's father, a firefighter and fixture around the Bakersfield racing scene, built him his first car to compete in the lower NASCAR Series by using the money he earned to run his own garage, Harvick Motorsports. When Harvick could not race, such as in the winter, he competed on his high school wrestling team at North High School in Bakersfield winning a CIF Central Section title in his weight class his senior year. Growing up Harvick also participated in baseball, basketball, football, and soccer. Originally intending to attend college and major in architecture, Harvick took classes at Bakersfield College. However he found his heart was in racing and dropped out to continue his racing career full-time.

Harvick has stated countless times that his favorite driver growing up was 4-time Indy 500 champion Rick Mears who grew up at and was an idol of Bakersfield, California.

Harvick made his Craftsman Truck Series (now known as Camping World Truck Series) debut in 1995 at the Mesa Marin Raceway, in his hometown of Bakersfield, where he started and finished 27th in his family-owned No. 72. He drove four races in the No. 72 the next season, his best finish was 11th at Mesa Marin. In 1997, he signed to drive the No. 75 for Spears Motorsports mid-season, posting two eighth-place finishes. 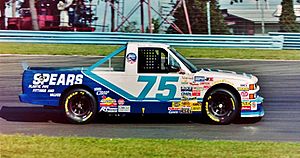 He ran a full schedule the next season, posting 3 top-fives and finishing 17th in points. Harvick also moved up to the NASCAR Grand National Division, AutoZone West Series (now known as the NASCAR K&N Pro Series West) in 1997, and in 1998 Harvick won five races on his way to the Winston West Series championship while driving for Spears. He received his first real national exposure during the winter of 1997/1998 on ESPN2's coverage of the NASCAR Winter Heat Series at Tucson Raceway Park. In 1999, he drove the No. 98 Porter Cable Ford for Liberty Racing. 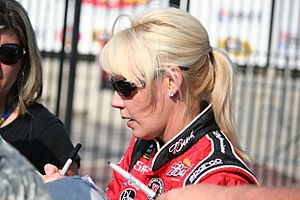 DeLana Harvick at Charlotte Motor Speedway in May 2011

Harvick married wife DeLana (Linville) Harvick on February 28, 2001, in Las Vegas, Nevada, shortly after his Sprint Cup Series debut. They had met the previous year at Michigan International Speedway where at the time she was working in public relation, DeLana had even dabbled in race driving herself. Her father is former NASCAR Xfinity Series driver John Paul Linville.

The couple live in Charlotte, North Carolina with their son and daughter. His wife, DeLana is an active participant in Harvick's career, co-owning and working with KHI Management LLC a Sports Management Agency, as well as frequently appearing on Harvick's pit box during Sprint Cup races. 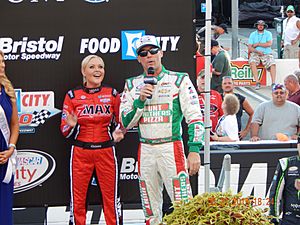 Established in 2010 by Harvick and his wife, DeLana, the mission of the Kevin Harvick Foundation (KHF) is to support programs that enrich the lives of children throughout the United States. The foundation works to not only improve the quality of life, but to help underprivileged youth find and realize their dreams by supporting programs such as the Kevin Harvick Athletic Scholarship Fund at California State University, Bakersfield, a camper cabin at Victory Junction, Baptist Children's Homes of NC, Boys & Girls Clubs, and Kevin's Krew.

Harvick has made several TV talk show appearances during his career on shows such as Late Show with David Letterman, Live with Regis and Kelly, Jim Rome is Burning, and The Tony Danza Show. 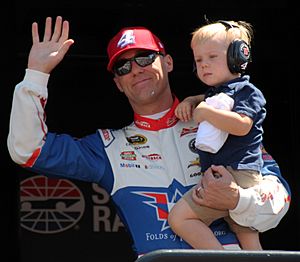 He was also on the first season of FX's NASCAR Drivers: 360. It took an in-depth look at NASCAR drivers outside the track and the preparation it takes to be a NASCAR driver.

Harvick has also been on MTV Cribs. He is an avid fan of the Philadelphia Flyers of the NHL.

All content from Kiddle encyclopedia articles (including the article images and facts) can be freely used under Attribution-ShareAlike license, unless stated otherwise. Cite this article:
Kevin Harvick Facts for Kids. Kiddle Encyclopedia.