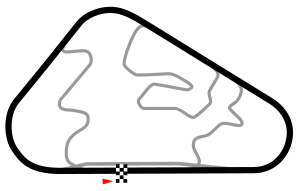 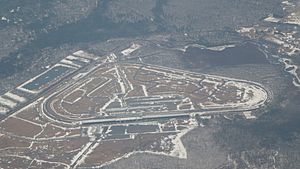 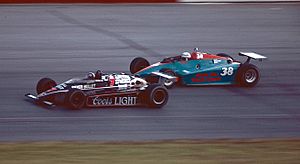 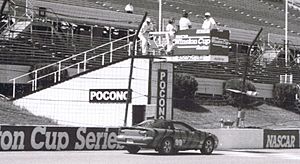 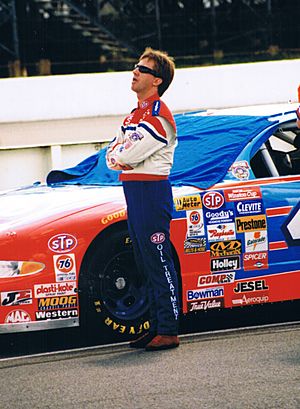 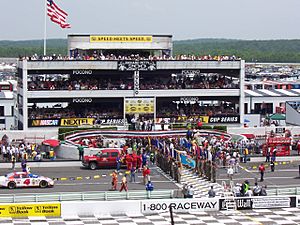 Pocono Raceway (formerly Pocono International Raceway), also known as The Tricky Triangle, is a superspeedway located in the Pocono Mountains in Long Pond, Pennsylvania. It is the site of four NASCAR national series races and an ARCA Menards Series event in June: a NASCAR Cup Series doubleheader with support events by the NASCAR Xfinity Series and NASCAR Camping World Truck Series. From 1971 to 1989, and from 2013 to 2019, the track also hosted an Indy Car race, currently sanctioned by the IndyCar Series.

Pocono is one of only a few NASCAR tracks not owned by either NASCAR or Speedway Motorsports, the dominant track owners in NASCAR. Pocono CEO Nick Igdalsky and president Ben May are members of the family-owned Mattco Inc, started by Joseph II and Rose Mattioli. Mattco also owns South Boston Speedway in South Boston, Virginia.

Outside NASCAR and IndyCar Series races, Pocono is used throughout the year by the Stock Car Experience, Bertil Roos Driving School, Sports Car Club of America (SCCA) as well as many other clubs and organizations. The triangular track also has three separate infield sections of racetrack – the north course, east course and south course. Each of these infield sections use separate portions of the track or can be combined for longer and more technical course configurations. In total Pocono Raceway has offers 22 different road course configurations ranging from .5 miles to 3.65 miles in length. During regular non-race weekends, multiple clubs or driving schools can use the track simultaneously by running on different infield sections. All of the infield sections can also be run in either clockwise or counter clockwise direction which doubles the 22 course configuration to 44 total course options.

The track was designed by 1959 and 1962 Indianapolis 500 winner Rodger Ward, Pocono Raceway has a unique design, as each turn is modeled after a turn at a different track.

The circuit is sometimes considered a tri-oval, but the turns are much more severe than those of a more typical tri-oval such as Daytona and other intermediate speedways. An additional complication is that the three turns are in no way the same, nor are any of the three straights identical in length. The banking of each turn is considerably less than on many other long superspeedways.

Although the track is long [2.5 mi (4.023 km)], the sharp nature of the turns and the low banking tend to make the average speeds on NASCAR racecars lower than at other tracks of similar lengths. Because of its unique characteristics, Pocono is sometimes referred to as a roval (an oval track that behaves like a road course). Others refer to Pocono as a modified road course, due to the use of shifting gears to handle the range between the slowest turn and the fastest straightaway.

The unique design makes the setup of the car and the crew's ability to make chassis adjustments more crucial than at many other tracks. Often it is the difference between a winning performance and a poor performance.

In 1991 some drivers in NASCAR (notably Mark Martin) experimented with shifting gears down the long, 3,740 foot front straight. The ratios for third gear and fourth gear were set so that third was used for most of the circuit (including the turns), and fourth was used for the later part of the long front stretch. This method provided a better RPM range around the track and improved overall lap times. By 1993, the entire field was shifting at Pocono, and using a special transmission (manufactured by Jerico) to shift gears without using the clutch. Shifting was criticized by some drivers (Rusty Wallace stated that the Jerico took away the ability to pass cars while Terry Labonte called it "a pain in the butt"). However, the practice continued until 2005, when a new gear rule eliminated the effectiveness of shifting. In 2011 the gear rule was changed again, and shifting returned to Pocono.

From 1971 to 1989, first USAC and then the CART IndyCar World Series held a 500-mile (800 km) race at Pocono as part of the IndyCar 500-mile Triple Crown. In 1989, Emerson Fittipaldi set a qualifying track record of 211.715 mph (340.722 km/h). Following the 1989 race, however, the track was criticized for its roughness, lack of catch fencing and runoff areas. After continuing squabbles between the management and the sanctioning body, it was removed from the IndyCar schedule. 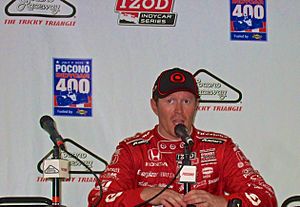 Scott Dixon talks to the press after winning the Pocono IndyCar 400 in 2013.

In the wake of a meeting between Pocono CEO Brandon Igdalsky and IndyCar CEO Randy Bernard at the 2012 Honda Grand Prix of St. Petersburg, speculation developed throughout 2012 regarding the possibility of a 2013 IndyCar Series race at Pocono Raceway. On the September 30, 2012, edition of Speed Channel's WindTunnel with Dave Despain, Bernard officially confirmed that the IndyCar Series would return to Pocono with a 400-mile race on July 7, 2013. Further acknowledging Pocono's place in IndyCar history, Bernard also announced that from 2013, the Indianapolis 500, Pocono IndyCar 400 and MAVTV 500 at California's Auto Club Speedway would mark a revival of IndyCar's all-oval Triple Crown. A $1 million bonus will be paid to a driver who wins all three races in a single season. Thanks to the popularity of their return to Pocono, they announced that they would lengthen the race to its original distance of 500-miles/200-laps. The 2014 event marked the first 500-mile IndyCar race at Pocono since 1989. It also became the fastest 500-mile race in motorsports history as Juan Pablo Montoya completed the race at an average speed of 202.402 MPH, breaking Mark Martin's record that he established at Talladega Superspeedway in May 1997.

During the 2015 ABC Supply 500, Andretti Autosport driver Justin Wilson was struck in the head by Sage Karam's nose cone after he crashed in turn 1 late in the race. Wilson died from his injuries on August 24, 2015, the day after the race, at Lehigh Valley Hospital-Cedar Crest in Allentown, Pennsylvania. On lap 7 of the 2018 edition, Ryan Hunter-Reay and rookie Robert Wickens collided at the exit of the Tunnel Turn while battling for 3rd, that saw Wickens' car fly into the catch fence, necessitating a lengthy red flag. Wickens survived the crash, but was paralysed from the waist down. In 2019, racing driver Felix Rosenqvist was hospitalised following a five-car collision, resulting in calls by Wickens for IndyCar to remove Pocono from the schedule.

On September 1, 2019 the IndyCar Series released the 2020 schedule, and they will not be returning to Pocono in 2020. No reason was specified, and Pocono's date was moved to Richmond Raceway.

From 1977 to 1991, Pocono Raceway hosted the Race of Champions Modified race. From 1977 to 1979, the race was held on the 2.5-mile (4.0 km) triangular superspeedway; from 1980 onward, the three-quarter-mile infield oval was used. Richie Evans and George Kent were the leading winners, each winning two of the fifteen RoC events at Pocono. In 1992, the Race of Champions was moved to Flemington Raceway. 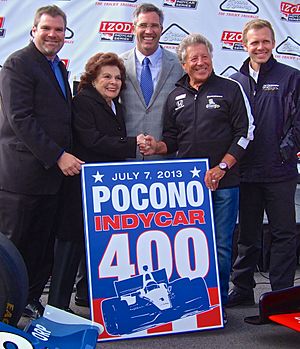 Pocono Raceway and IndyCar announce the return of the Tricky Triangle to the IndyCar schedule starting in 2013. 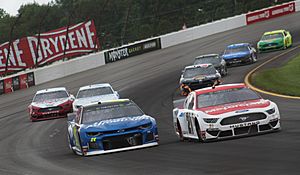 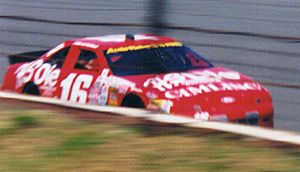 Tim Steele at the Pocono ARCA race in June 1996. Steele, a 3-time ARCA Champion, would win 9 ARCA races at Pocono, the most by a driver in a single series at the track.

In July 2010 Pocono Raceway began the installation of a 3 megawatt solar photovoltaics system. Upon completion the racetrack became the largest solar-powered sports facility in the world. The "solar farm" encompasses approximately 25 acres and consists of almost 40,000 solar modules, which satisfies the energy consumption for the entire racing complex and will help power 1,000 homes. By December 2010, with less than four months in operation, the Pocono system had surpassed the 1,000,000 kilowatt hour production mark. Over the next 20 years the system is expected to produce in excess of 72 million kilowatt hours and offset 3,100 metric tons of carbon dioxide annually. Sheep are used to keep the grass to a low level.

All content from Kiddle encyclopedia articles (including the article images and facts) can be freely used under Attribution-ShareAlike license, unless stated otherwise. Cite this article:
Pocono Raceway Facts for Kids. Kiddle Encyclopedia.