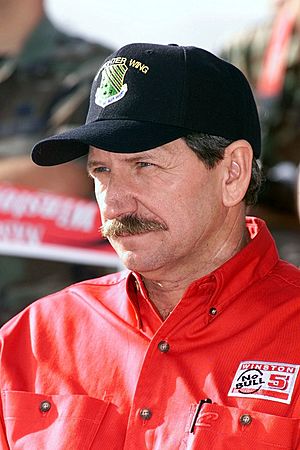 Ralph Dale Earnhardt Sr. (April 29, 1951 – February 18, 2001) was an American professional auto racing driver and team owner, best known for his involvement in stock car racing for NASCAR. The third child of racing driver Ralph Earnhardt and Martha Earnhardt, he began his career in 1975 in the World 600 as part of the Winston Cup Series.

Regarded as one of the greatest drivers in NASCAR history, Earnhardt won a total of 76 Winston Cup races over the course of his career, including the 1998 Daytona 500. He also earned seven NASCAR Winston Cup championships, tying for the most all-time with Richard Petty and Jimmie Johnson. His aggressive driving style earned him the nicknames "Ironhead", "The Intimidator", and "The Man in Black". Also, his success at the restrictor plate tracks of Daytona and Talladega earned him the nickname, "Mr. Restrictor Plate".

In February 2001, Earnhardt died in a sudden last-lap crash during the Daytona 500, an event that is regarded in the racing industry as being a crucial moment in improving safety in all aspects of car racing, especially NASCAR. Earnhardt has been inducted into numerous halls of fame, including the NASCAR Hall of Fame inaugural class in 2010.

Earnhardt was born in Kannapolis, North Carolina on April 29, 1951 to Martha Coleman and Ralph Earnhardt, who was then one of the best short-track drivers in North Carolina. Ralph won his one and only NASCAR Sportsman Championship in 1956. Although Ralph did not want his son to follow in his footsteps, Earnhardt would not be persuaded to give up his dream of racing, and even dropped out of high school to race. Ralph was a hard teacher for Earnhardt, and after Ralph died of a heart attack at his home in 1973, it took many years before Earnhardt felt as though he had finally "proven" himself to his father.

When he was 17, he married his first wife, Latane Key, in 1968. Key gave birth to Earnhardt's first son, Kerry, in 1969. They were subsequently divorced in 1970. In 1971, Earnhardt married his second wife, Brenda Gee (the daughter of NASCAR car builder Robert Gee), who gave birth to a daughter, Kelley, in 1972, and a son, Dale Jr., in 1974. Not long after his second son was born Dale and Brenda divorced. Dale then married his last wife, Teresa. 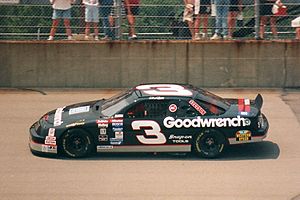 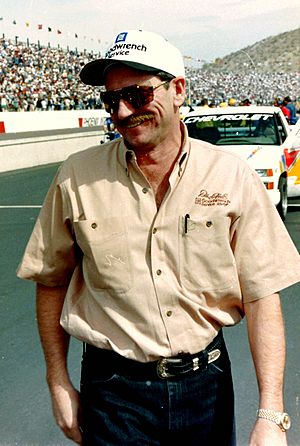 During his career, Earnhardt won the NASCAR Championship seven times, tying the record of the legendary Richard Petty. Additionally, his prize winnings totalled more than $41 million. In addition to a hard-charging racing style, Earnhardt was known for being excellent at drafting, the phenomenon where two cars lined up together go faster than one car alone. Earnhardt discovered "side-drafting". Earnhardt was also known for his dominance at restrictor plate racing. Restrictor plates are used at two superspeedways, Daytona and Talladega, where drafting also plays a large role in who wins — subsequently Dale Earnhardt and the teams he had worked with all do very well at those tracks. Earnhardt himself had 10 wins at Talladega alone.

Dale drove the #3 car for most of his career, spanning the late 1970s until his unfortunate passing in 2001.

In 1981, after a successful two and a half year stint with car owner Rod Osterlund, winning the 1980 championship, Osterlund sold his team to J. D. Stacy. Earnhardt never liked Stacy, and when independent driver Richard Childress was given an offer to retire and let Earnhardt take over his #3 car, complete with Earnhardt's Wrangler Jeans sponsorship, Childress gave up his ride to field cars for Earnhardt. That partnership won 69 of Earnhardt's 76 races. While Earnhardt and Childress decided to split after the 1981 season (Earnhardt drove for Walter Moore, and Childress hired Ricky Rudd), they returned for 1984, and created one of the most successful teams in motorsports.

Earnhardt was heading into Turn 3 on the last lap when he crashed.

Earnhardt was taken to Halifax Medical Center by ambulance after being removed from his car. Hours later, at a press conference, NASCAR President Mike Helton made the formal announcement to say that Dale Earnhardt had died.

Earnhardt's death was the catalyst for change that continues even now.

Nearly every detail of the event was made public, from the finding of a torn seatbelt inside Earnhardt's car to the injuries the driver suffered at the moment of impact.

Earnhardt's #3 car was immediately retired by team owner Richard Childress, who made a public pledge that the number would never again adorn the side of a black car sponsored by GM Goodwrench, the color scheme and sponsor Earnhardt had driven since 1988. 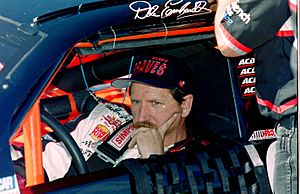 Earnhardt in the No. 3 car

Earnhardt drove the #3 car for most of his career, spanning the early 1980s until his death in 2001. Although he had other sponsors during his career, his #3 is associated in fan's minds with his last sponsor, GM Goodwrench, and his last color scheme — a predominantly black car with bold red and silver trim. The black and red #3 continues to be one of the most famous logos in racing.

In 2002, Dale Earnhardt, Jr., drove a Chevrolet Monte Carlo in the Busch Grand National series race at Daytona. The car featured Oreo Cookies as a primary sponsor, and carried the trademarked #3 on the doors and roof. He went on to win the race. As of 2006, he hasn't driven the #3 again. 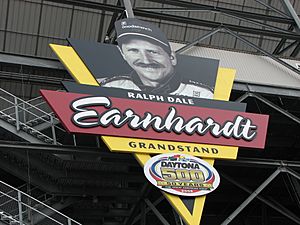 Earnhardt was a very polarizing figure in NASCAR. He was both loved and hated in the sport, yet despite his numerous detractors, Earnhardt remained one of the sport's most popular drivers. His death drew a considerable amount of reaction from the nation, NASCAR, and his fans.

Earnhardt kept his personal life relatively private. He enjoyed the company of his family, being outdoors, hunting and fishing, and actively working on his farm in Mooresville. In contrast with his image as a hardnosed competitor on the track, off the track he was known to his friends as someone who was charitable and generous, but usually kept that side of himself hidden from the rest of the world.

Earnhardt has a street in his hometown of Kannapolis named after him. Dale Earnhardt Boulevard (originally Earnhardt Road) is marked as Exit 60 off Interstate 85, northeast of Charlotte. Dale Earnhardt Boulevard is also the start of The Dale Trail, a self-guided driving tour of landmarks in the lives of Dale and his family. A road between Kannapolis and Mooresville, near the headquarters of DEI, has been given the designation State Highway 3 by the North Carolina Department of Transportation. In addition, Exit 73 off Interstate 35W, one of the entrances to Texas Motor Speedway, is named "Dale Earnhardt Way".

Between the 2004 and 2005 JGTC (subsequently renamed Super GT from 2005) season, Hasemi Sport competed in the series with a sole black G'Zox sponsored Nissan 350Z with the same number and letterset as Earnhardt on the roof.

On June 18 2006 at Michigan for the 3M Performance 400 Dale Earnhardt Jr ran a special vintage Budweiser car to honor his dad and his grandfather Ralph Earnhardt. He finished 3rd after rain caused the race to be cut short. The car was painted to resemble Ralph's 1956 dirt cars, and carried 1956-era Budweiser logos to complete the throwback look.

In the summer of 2007, Dale Earnhardt Inc. (DEI) with the Dale Earnhardt Foundation, announced it will fund an annual undergraduate scholarship at Clemson University in Clemson, South Carolina for students interested in motorsports and automotive engineering. Scholarship winners are also eligible to work at DEI in internships. The first winner was William Bostic, a senior at Clemson majoring in mechanical engineering.

"Earnhardt Tower", a seating section at Daytona International Speedway, the track where Earnhardt was killed, was named in his honor.

All content from Kiddle encyclopedia articles (including the article images and facts) can be freely used under Attribution-ShareAlike license, unless stated otherwise. Cite this article:
Dale Earnhardt Facts for Kids. Kiddle Encyclopedia.