Kannapolis is a city in Cabarrus and Rowan counties, in the U.S. state of North Carolina, northwest of Concord and northeast of Charlotte and is a suburb in the Charlotte metropolitan area. The city of Kannapolis was incorporated in 1984. The population was 42,625 at the 2010 census, which makes Kannapolis the 20th largest city in North Carolina. It is the home of the Kannapolis Cannon Ballers, the Low-A baseball affiliate of the Chicago White Sox, and it is the hometown of the Earnhardt racing family. It is also the headquarters for the Haas F1 racing team. The center of the city is home to the North Carolina Research Campus, a public-private venture that focuses on food, nutrition, and biotech research.

Early meaning and usage of the city's name was a direct reference to Cannon Mills Corporation, or James William Cannon himself. Early published name variations include "Cannon-opolis" and "Cannapolis". A widely accepted origin of the word "Kannapolis" comes from the combination of the Greek words kanna (reeds, not looms) and polis (city), which some believed meant "City of Looms". Dr. Gary Freeze, Catawba College history and politics department chairman, said a Concord newspaper used the name "Cannon City" in 1906. After mill workers or newspapers called the town "Cannapolis", J.W. Cannon asked Cabarrus County commissioners to give the town the name, but starting with a "K". Kannapolis historian Norris Dearmon said the K might have been to distinguish the town from his Concord mill village. Since, Freeze said, "Jim Cannon didn't study Greek," Cannon did not name the town "city of looms".In 1906 J.W. Cannon purchased the land that later became Kannapolis, and acquired a total of 1008 acres in Cabarrus and Rowan Counties. Approximately 808 of those acres of farmland, purchased along the historic wagon road between Salisbury and Charlotte, became the location of the new textile mill, Cannon Manufacturing. Cannon Manufacturing began production in 1908. In 1914 Cannon Manufacturing became known as the world’s largest producer of sheets and towels. Shortly after, Mr. Cannon opened plants in Rowan County, Concord and in South Carolina totaling 20,000 workers. Mill founder J.W. Cannon’s youngest son, Charles A. Cannon, consolidated all the separate mills into the giant Cannon Mills Company in 1928.

The Meek House and Harvey Jeremiah Peeler House are listed on the National Register of Historic Places.

Kannapolis is located on the boundary of Cabarrus and Rowan counties, with a greater portion of its area in Cabarrus County. U.S. Route 29 (Cannon Boulevard) passes through the city east of the downtown area; U.S. 29 leads northeast 15 miles (24 km) to Salisbury and south 7 miles (11 km) to Concord. Interstate 85 bypasses the city on the south and the east, with access from Exits 54 through 63 (five exits total). I-85 leads northeast 65 miles (105 km) to Greensboro and southwest 21 miles (34 km) to Charlotte. 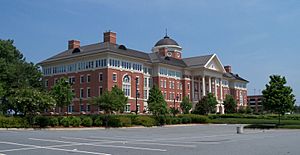 David H. Murdock, owner of the real estate company Castle & Cooke and former CEO of Dole Food Company, and Molly Corbett Broad, president of the 16-campus University of North Carolina system, unveiled plans on September 12, 2005, for the research campus, as an economic revitalization project that encompasses the site of the former Cannon Mills plant and entire downtown area of Kannapolis.

During the next few years, the NC Research Campus was developed by Castle and Cooke in collaboration with UNC General Administration and several North Carolina universities, including NC State, UNC-Chapel Hill, and others. In 2008, faculty from NC State, UNC-Chapel Hill, UNC Charlotte, UNC Greensboro, NC A&T, NC Central, and Appalachian State moved into the Nutrition Research Institute building, operated by UNC-Chapel Hill, and the Plants for Human Health Institute, operated by NC State. The buildings are owned by Castle and Cooke, which rents the space to the UNC system in a rent-to-own agreement.

Funding for research and education activities at NCRC comes from federal and private research grants and donations, which support individual laboratories, and from the North Carolina State budget, which supplies general operating expenses and salaries for faculty and support staff. Funding from the Legislature is disbursed to individual universities to support their operations at NCRC.

Kannapolis has several public recreational areas. These include parks, athletic fields and greenways. One public park in the city, Vietnam Veterans Park (formerly, North Cabarrus Park) is maintained and operated by Cabarrus County.

The Kannapolis Amtrak station is located at 201 South Main Street.

In 2004, a silent film about Kannapolis, showing the everyday behavior of ordinary people, which was made in 1941 by itinerant filmmaker H. Lee Waters, was selected by the Library of Congress for listing in the United States National Film Registry, as a representative of this kind of filmed "town portrait" popular in the 1930s and 1940s.

Ambassador Christian College has a campus in Kannapolis offering undergraduate and graduate degrees in Theology. The school was founded in 2003 by Dr. Keith Slough.

All content from Kiddle encyclopedia articles (including the article images and facts) can be freely used under Attribution-ShareAlike license, unless stated otherwise. Cite this article:
Kannapolis, North Carolina Facts for Kids. Kiddle Encyclopedia.