Corey Drew Seager (born April 27, 1994) is an American professional baseball shortstop for the Los Angeles Dodgers of Major League Baseball (MLB). The Dodgers selected Seager in the first round of the 2012 Major League Baseball draft, and he made his major league debut in 2015. Seager was the 2016 National League (NL) Rookie of the Year and was an MLB All-Star in his first two seasons in the majors. He was named the NL Championship Series Most Valuable Player (MVP) and the World Series MVP while leading the Dodgers to the 2020 World Series title over the Tampa Bay Rays.

Corey Seager was born in Charlotte, North Carolina, to Jeff and Jody Seager. He is the youngest of three brothers. His oldest brother Kyle Seager is a third baseman who plays for the Seattle Mariners. The middle brother, Justin, was drafted in the 12th round of the 2013 Major League Baseball draft. Seager grew up a New York Yankees fan and idolized Derek Jeter.

Seager attended Northwest Cabarrus High School in Kannapolis, North Carolina. He committed to attend the University of South Carolina on a college baseball scholarship. The Los Angeles Dodgers of Major League Baseball (MLB) selected Seager in the first round with the 18th overall selection of the 2012 MLB draft. He received a $2.35 million signing bonus to sign with the Dodgers instead of attending South Carolina.

Seager began his professional career with the Ogden Raptors of the Pioneer League, where he had a .309 batting average in 46 games in 2012. He was promoted to the Great Lakes Loons of the Class A Midwest League for 2013. He hit .309 with 12 home runs and 57 runs batted in (RBIs) in 74 games for Great Lakes and was promoted on August 3 to the Rancho Cucamonga Quakes of the Class A-Advanced California League. In 27 games at the new level, he hit just .160. Seager played for the Glendale Desert Dogs in the Arizona Fall League after the 2013 regular season, and was selected to play in the AFL Fall Stars Game. 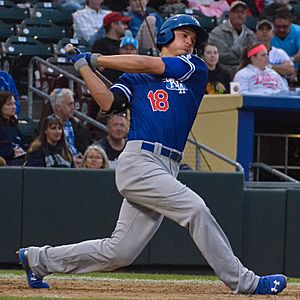 Seager batting for the Oklahoma City Dodgers, the triple-A affiliate of the Los Angeles Dodgers, in 2015

In 2014, Seager hit .352 with 18 home runs and 70 RBIs for the Quakes and was selected to the mid-season California League All-Star team. He played for the USA team at the 2014 All-Star Futures Game. After the Futures Game, he was promoted to the Chattanooga Lookouts of the Class AA Southern League. With the Lookouts, he played in 38 games and hit .345.

Seager was named the MVP of the California League for 2014. He was also selected to Baseball America's minor league All-Star team. On September 26, the Dodgers announced that Seager was the co-winner, along with Joc Pederson, of the organization's "Minor League Player of the Year" award. He returned to the Desert Dogs in the AFL after the season and was awarded with a spot on the AFL Top Prospects List.

Seager received a non-roster invite to the Dodgers major league spring training in 2015. MLB.com ranked him the 7th-best prospect in baseball going into the 2015 season, and Baseball America named him the #5 prospect in 2015.

On May 1, 2015, Seager was promoted to the Oklahoma City Dodgers of the Class AAA Pacific Coast League (PCL). In a game on May 28 against the Salt Lake Bees, Seager had six hits in six at-bats, including a home run, and six RBI. He was the second player in the history of the Oklahoma City franchise to record six hits in one game. He was selected to the mid-season PCL All-Star team. In 104 games for Oklahoma City, Seager hit .276 with 13 homers and 59 RBI. Baseball America selected him to their Minor League All-Star team, and named him a AAA All-Star and the AAA Player of the Year. 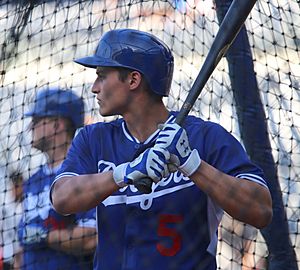 Seager with the 2015 Los Angeles Dodgers

On September 3, 2015, the Dodgers called Seager up to the majors, and he made his debut that night as the starting shortstop against the San Diego Padres. He had two hits in four at-bats with two RBI in his debut, with his first MLB hit being a double to right field off of Colin Rea of the Padres.

On September 12, 2015, against the Arizona Diamondbacks, Seager was 4-for-4 with his first MLB home run (off Josh Collmenter), a walk and a stolen base, making him the third-youngest player in history to accomplish that feat (after Ken Griffey, Jr. and Orlando Cepeda). On September 21, Seager passed Bill Russell by reaching base safely in his first 16 major league starts, a new Dodger record. He hit .337 in 27 games with the Dodgers, with four homers and 17 RBI, supplanting Jimmy Rollins as the Dodgers starting shortstop down the stretch. He was the starting shortstop for the Dodgers in the first game of the 2015 National League Division Series, making him the youngest position player to start a postseason game in franchise history.

The Dodgers' Opening Day starting shortstop in 2016, Seager became the youngest for the Dodgers since Gene Mauch in 1944. On June 3, Seager hit three home runs in a game against the Atlanta Braves. He was the first Dodgers shortstop to do so since Kevin Elster in 2000, the youngest shortstop in major league history to accomplish that feat and the sixth youngest player overall. Seager was named the National League Rookie of the Month for June and was selected to play to the National League All-Star team. He also participated in the Home Run Derby and hit 15 homers, the second best total for a Dodgers player in Derby history, though he failed to advance past the first round.

On August 6, 2016, Seager hit his 31st double of the season, surpassing Eric Karros to set a new Dodgers rookie record, and two days later, he hit his 20th home run of the season, surpassing Hanley Ramírez for sole possession of the Los Angeles Dodgers record for home runs in a season by a shortstop. He hit his 22nd homer on August 22, tying Glenn Wright for the franchise record. On August 27, he passed Wright to take sole possession of the record, with a first inning homer off of Jason Hammel of the Chicago Cubs. He and his brother, Kyle Seager, became the first pair of brothers in major league history to each hit 25 or more homers in the same season. With two hits on September 17, Seager moved past Steve Sax (1982) for the most hits in a season by a Los Angeles Dodgers rookie. On September 20, he became the first Dodgers rookie to hit 40 doubles in a season. He finished his rookie season with a .308 batting average, 26 home runs and 72 RBI in 157 games. Baseball America selected him as their 2016 Rookie of the Year as did The Sporting News, and the Players Choice Awards.

Seager homered in the first inning of Game 1 of the 2016 National League Division Series against the Washington Nationals, becoming the youngest Dodgers player in history to hit a postseason home run. He hit .130 with two home runs in the division series and .286 with no homers in the Championship Series. After the season, Seager was awarded with the Silver Slugger Award, the third Dodgers rookie to win the award. He was also the unanimous winner of the National League Rookie of the Year Award, and the 2016 Esurance MLB/This Year in Baseball Award winner as Best Rookie. 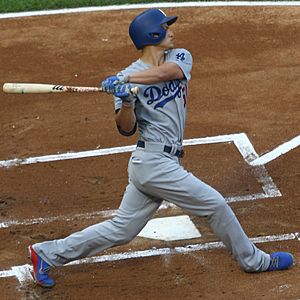 Seager with the 2017 Los Angeles Dodgers

On June 20, 2017, Seager had his second career three-home run game, against the New York Mets. He batted .295/.375/.479 with 22 home runs, was named to his second straight All-Star game and won his second consecutive Silver Slugger Award, the first Dodgers player to win back-to-back awards since Mike Piazza won five straight from 1993 to 1997. He was bothered at the end of the season by a sore elbow, which reduced his playing time and effectiveness in September.

On April 30, Seager was diagnosed with a right UCL strain, requiring Tommy John surgery, causing him to miss the remainder of the 2018 season. He was 27-for-101 (.267) with two home runs and 13 RBIs in the 26 games he played. He also underwent arthroscopic surgery on his left hip on August 7.

Seager was eligible for arbitration for the first time during the 2018-2019 offseason. He agreed to a one-year deal with the Dodgers for $4 million.

On June 11, Seager strained his left hamstring while baserunning and was placed on the 10-day injured list retroactive to the following day. An MRI exam confirmed the diagnosis of a Grade 1 to Grade 2 strain. Prior to the injury, Seager had been hitting .459 during his last 37 at bats (17 hits, including 7 doubles). He was activated from the injured list on July 10, and two days later began the second half of the season batting at the top of the order against the Red Sox. Seager finished the regular season batting .272/.335/.483 with 19 home runs, and despite missing one month of play, he set new career highs with 44 doubles (tied for the NL lead) and 87 RBIs.

In his second arbitration-eligible season, Seager agreed with the Dodgers to a one-year, $7.6 million contract. On August 17, Corey faced his brother, Mariners third baseman Kyle Seager, for the first time in an MLB game and both homered in the game, becoming the first pair of brothers to homer in the same game since César and Felipe Crespo did so on June 7, 2001. The emotions of and background leading up to the Seager brothers' August 17 encounter was published in a mini-documentary on the Dodgers' official YouTube channel.

Seager completed the 2020 regular season having played in 51 of 60 games and hit .307/.358/.585. Among all qualified hitters on the Dodgers, he led the team in batting average, slugging percentage, hits (65), doubles (12), and RBIs (41). Seager attributed much of his hitting success during the season to being fully healthy, as partly evidenced by his career-best 93.2 mph Statcast average exit velocity. On defense, he had the highest fielding percentage among major league shortstops, at .952. Seager was named MVP of the 2020 National League Championship Series, and was then named MVP of the 2020 World Series, while leading the Dodgers to their first championship since 1988. Between the NLCS and the World Series, Seager hit .347/.439/.816 with 7 home runs and 16 RBIs.

In his third and final arbitration-eligible season, Seager agreed to a one-year, $13.75 million contract with the Dodgers. Seager fractured his right hand when he was hit by a pitch by Ross Detwiler of the Miami Marlins on May 15.

All content from Kiddle encyclopedia articles (including the article images and facts) can be freely used under Attribution-ShareAlike license, unless stated otherwise. Cite this article:
Corey Seager Facts for Kids. Kiddle Encyclopedia.