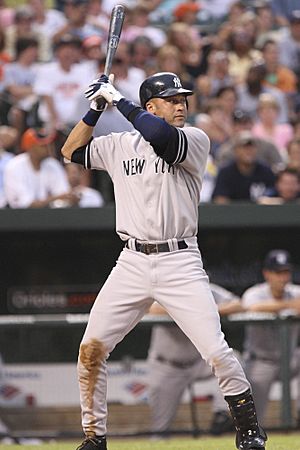 Jeter made his major league debut on May 29, 1995 with the New York Yankees against the Seattle Mariners when he was 20 years old. He had been playing with the New York Yankees for 20 years ever since he made it to the majors. He has won many awards such as the American League Rookie of the Year Award, a Silver Slugger Award, and three Gold Glove Awards. In the year 2000, Jeter became the only player to win both the All-Star Game MVP Award and the World Series MVP Award in the same year.

Derek Jeter was born in Pequannock Township, New Jersey, to an African-American father, Dr. Sanderson Charles Jeter; his mother Dorothy is of Irish and German descent. The family lived in North Arlington, New Jersey with his family, before moving to Kalamazoo, Michigan, when he was 4.

Jeter was inspired to play baseball by Hall of Famer Dave Winfield. In high school Derek's Parents wanted him to go to a small Catholic high school but Jeter went to Kalamazoo Central High School.

Jeter was a star player at Kalamazoo Central High School. Jeter earned an All-State honorable mention while he was playing basketball also.

In December 2007, Jeter was added to the Kalamazoo Central High School Athletic Hall of Fame.

Although Jeter received a baseball scholarship to attend the University of Michigan, he was drafted by the New York Yankees with the 6th overall pick in the 1992 amateur draft and he chose to try to make it to the majors. Jeter has said that he will eventually go back to college and earn a degree.

Jeter connects for a hit against the Tampa Bay Devil Rays

Jeter has played a role for the Yankees since 1996. Jeter is one of three current veterans (the others are Jorge Posada and Mariano Rivera) who came up through the Yankees organization, and has played his entire professional career with the Yankees. As the Yankees Shortstop, he is currently the longest-serving position player on the team. As of his current contract, Derek earns $22 million a year in salary, and is the second highest paid endorser in baseball having earned $7 million in endorsements in 2006. Also, he was ranked as the most marketable player in baseball according to an 2005 Sports Business Survey. 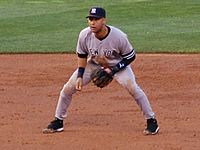 On May 29, 1995, Jeter made major league debut against the Seattle Mariners in the Kingdome. He made his first major league hit the following day off veteran pitcher Tim Belcher, and started 13 games before being sent back down to the minors.

He returned on Opening Day of the 1996 season as the starting shortstop (the first Yankee rookie since Tom Tresh in 1962 to do so) and hit his first major-league home run on that day. Coincidentally, his home run was called by another former Yankee shortstop, the late Hall of Famer Phil Rizzuto, with whom Jeter would get guidance from whenever the two met. Jeter played his way to a successful rookie season, hitting for a .314 batting average, 10 home runs, and 78 runs batted in and subsequently earning Rookie of the Year honors.

All content from Kiddle encyclopedia articles (including the article images and facts) can be freely used under Attribution-ShareAlike license, unless stated otherwise. Cite this article:
Derek Jeter Facts for Kids. Kiddle Encyclopedia.