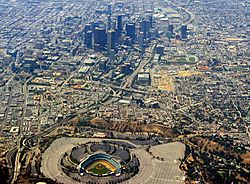 Dodger Stadium is a baseball park and the home of the Los Angeles Dodgers. It was built in 1962, making it one of the oldest ball parks. (Fenway Park in Boston, Massachusetts and Wrigley Field in Chicago, Illinois are older.) It is also one of the largest baseball park in seating capacity.

Dodger Stadium was constructed from 1959 to 1962 at a cost of $23 million dollars. A neighborhood called Chavez Ravine had to be torn down to build the stadium. The Los Angeles Angels rented from the Dodgers from 1962 through 1965, before moving to Anaheim Stadium. The Angels called the ballpark Chavez Ravine Stadium.

There was talk of tearing down the stadium to build a football stadium, but that did not happen. 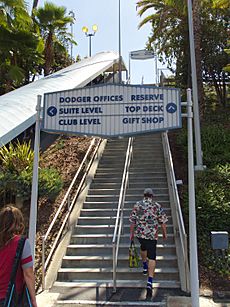 Dodger Stadium was one of the last baseball-only facilities built before the dawn of the multi-purpose stadium. It was built near the convergence of several freeways near downtown Los Angeles, with an expansive parking lot surrounding the stadium. With the construction of many new MLB ballparks in recent years, it is now the third-oldest park still in use, and the oldest on the West Coast.

Dodger Stadium offered several innovative design features. One of these was a covered and screened section of dugout-level seats behind home plate. Dodger owner Walter O'Malley was inspired to incorporate this feature into the Dodger Stadium design after having seen it at Tokyo's Korakuen Stadium during the Brooklyn Dodgers' postseason goodwill tour of Japan in 1956. The original dugout seating area was replaced by more conventional box seating in a 1999 renovation, but this feature has been replicated at Progressive Field in Cleveland and Angel Stadium of Anaheim.

Two of Dodger Stadium's most distinctive features are the wavy roof atop each outfield pavilion and the top of a 10-story elevator shaft bearing the Dodger logo rising directly behind home plate at the top of the uppermost seating level. 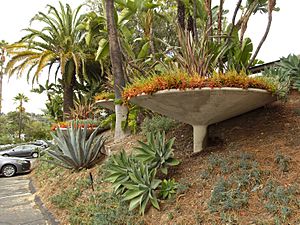 A unique terraced-earthworks parking lot was built behind the main stands, allowing ticketholders to park at roughly the level of their seats, minimizing use of ramps once inside. The stadium was also designed to be earthquake-resistant, an important consideration in California, and it has withstood several serious earthquakes.

Dodger Stadium was originally equipped with two large Fair Play electronic scoreboard units above the left- and right-field pavilions. The right-field board displayed in-game information. The left-field board displayed scores of out-of-town games and other messages. Smaller auxiliary scoreboards were installed at field level on the box seat fences beyond the first- and third-base dugouts during the inaugural 1962 season. The left-field message board was replaced by a Mitsubishi Electric Diamond Vision video board in 1980. The field-level auxiliary scoreboards were replaced by larger units installed on the facade of the Loge (second) seating level in 1998; these, in turn, were replaced by a video ribbon in 2005. Field-level out-of-town scoreboards were installed on the left- and right-field walls in 2003. 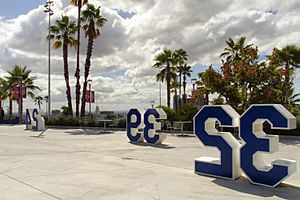 In addition to those of Don Drysdale, Sandy Koufax, and Don Sutton, the retired numbers of Pee Wee Reese, Jackie Robinson, Duke Snider, Tommy Lasorda, Walter Alston, Roy Campanella and Jim Gilliam are mounted on the club level facade near the left field foul pole. On April 15, 2017, to mark the 70th anniversary of Robinson's major league debut, the Dodgers unveiled a bronze statue of the player in the stadium's left-field plaza. The 800-pound sculpture depicts Robinson sliding into home plate as a rookie.

The Dodgers devote significant resources to the park's maintenance. For example, it is repainted every year, and a full-time crew of gardeners maintain the site. No plans are in the works to replace it. Renovations were made in 1999 and again in 2004 that initially added additional field level seats, particularly behind home plate where previously the only person seen there was scout Mike Brito, in his trademark Panama hat, tracking pitch speeds with a radar gun. After some criticism of the sightlines with these new seats, they were replaced with box seats. 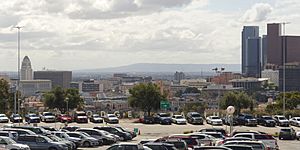 View of downtown and the Palos Verdes Peninsula 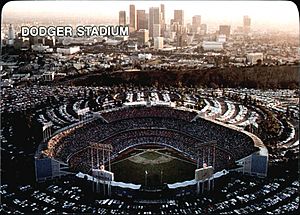 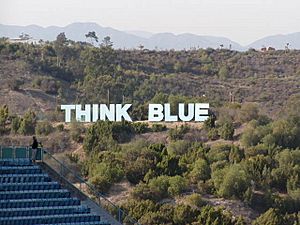 Think Blue sign in the mountains north of Dodger Stadium, a homage to the nearby Hollywood Sign.

Built on top of the historic Los Angeles neighborhood of Chavez Ravine in Solano Canyon, the stadium overlooks downtown Los Angeles and provides views of the city to the south, the green tree-lined hills of Elysian Park to the north and east, and the San Gabriel Mountains beyond the outfield pavilions. Due to dry summers in Southern California, rainouts at Dodger Stadium are rare. Prior to 1976, the Dodgers were rained out only once, against the St. Louis Cardinals, on April 21, 1967, ending a streak of 737 consecutive games without a postponement. On April 12, 1976, the second home rainout ended a streak of 724 straight games. April 19–21, 1988 saw three consecutive rainouts, the only time consecutive games have been rained out at Dodger Stadium. No rainouts occurred between April 21, 1988 and April 11, 1999 – a major league record of 856 straight home games without a rainout. That record has since been broken, with no rainouts since April 17, 2000, 1,373 consecutive games through September 25, 2016.

Dodger Stadium is the only current MLB park (excluding the most recently built parks) that has never increased its capacity. It has historically held 56,000 fans, due to a conditional-use permit limiting its capacity. Every time the Dodgers add seats, they always remove an equal number of seats in the upper deck or in the pavilion to keep the capacity the same. Through the sale of standing room only tickets, the Dodgers' 2009 home opener drew 57,099 fans, the largest crowd in stadium history. Following a number of incidents in the early 1970s in which fans showered Cincinnati Reds left fielder Pete Rose with beer, bottles, cups, and trash, the sale of beer was discontinued in both pavilions. Beer sales were reinstated in the right field pavilion in 2008, when that section was converted into the All You Can Eat Pavilion. Fans seated in that section can eat unlimited hot dogs and peanuts and also have access to free soft drinks. There is a charge for beer.

With the retirement of the original Yankee Stadium and Shea Stadium in 2008, the park claimed the title of being the largest capacity stadium in the Majors.

As of 2010, there are a total of 2,098 club seats and 68 luxury suites. Both of these amounts will increase once the renovations are complete.

Due to renovations made in the 2012–2013 offseason, the current maximum capacity of Dodger Stadium is less than 56,000, although the team's president, Stan Kasten, refuses to provide an exact number. A 53,393 attendance is considered a sellout. The high water mark since the renovations is 56,800 in Games 3,4 and 5 of the 2008 NLDS. The team's 2013 media guide and website still report the capacity as 56,000. The record attendance for the Dodgers was in the 2007 season, with 3.86 million in total attendance. 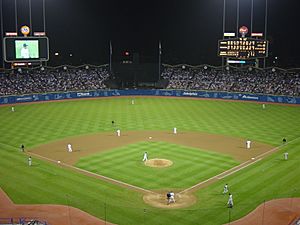 For various reasons, Dodger Stadium has long enjoyed a reputation as a pitchers' park. At first, the relatively deep outfield dimensions were a factor, with the power alleys being about 380 feet. Home plate was moved 10 feet toward center field in 1969, but that move also expanded foul ground by 10 feet, a tradeoff which helped to offset the increased likelihood of home runs caused by the decreased field dimensions. Also, during evening games, as the sun sets, the surrounding air cools quickly due to the ocean climate, becoming more dense. As a result, deep fly balls that might otherwise be home runs during the day instead often remain in play becoming outs. The park has been home to 12 no-hitters, while players have hit for the cycle just twice in Dodger Stadium.

Recently, Dodger Stadium has been more neutral with respect to home runs. The stadium does depress doubles and triples quite a bit, due to its uniform outfield walls and relatively small "corners" near the foul poles. However, the extremely short outfield walls near the foul poles also make some balls that would bounce off the wall in other parks go for home runs. With some expansion of the box seat area and the removal of significant foul territory, the ballpark has become more neutral, favoring neither pitchers nor hitters. Baseball-Reference's Park Factor measurement of 102 for the 2006 and 2007 seasons is evidence of this.

With the opening of Citi Field and the demolition of Shea Stadium in 2009, Dodger Stadium became the only stadium with symmetrical outfield dimensions remaining in the National League and only one of four total in Major League Baseball. The other three symmetrical fields are Kansas City's Kauffman Stadium, Toronto's Rogers Centre, and Oakland–Alameda County Coliseum, all in the American League.

Pitchers such as Sandy Koufax, Don Drysdale, Don Sutton, Fernando Valenzuela, and Orel Hershiser became superstars after arriving in Los Angeles. The pitcher's edge is also evident in the fact that 12 no-hitters have been thrown in the stadium, including two perfect games (by the Dodgers' Sandy Koufax in 1965, and by Dennis Martínez of the former Montreal Expos in 1991). Bo Belinsky threw the first ever no-hitter in Dodger Stadium on May 5, 1962 while pitching for the Los Angeles Angels (that club referred to the park as "Chavez Ravine".)

The park's significant advantage was eroded somewhat since 1969, in general because MLB rules were changed after the "Year of the Pitcher" to lower the maximum height of the pitcher's mound, and more specifically because the Dodgers moved the diamond about 10 feet (3 m) towards center field. This also gave the fielders more room to catch foul balls, so there was some tradeoff. Following the 2004 season, the stadium underwent a renovation which significantly reduced the amount of foul territory. Seats were added which were closer to home plate than the pitcher's mound, the dugouts were moved 20 feet closer to the field, and previously open space down the foul lines was filled with new seats.

All content from Kiddle encyclopedia articles (including the article images and facts) can be freely used under Attribution-ShareAlike license, unless stated otherwise. Cite this article:
Dodger Stadium Facts for Kids. Kiddle Encyclopedia.