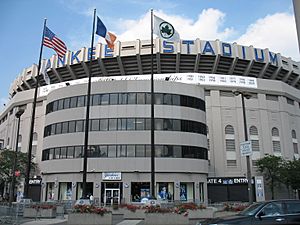 The original Yankee Stadium was a baseball stadium in New York City, New York in the United States. It was opened in 1923. The MLB team New York Yankees played there until 2008. The Yankees moved to the new Yankee Stadium starting with the 2009 season. The Stadium was also the home field of the New York Giants football team from the mid-1950s into the early 1970s. It was also used for college football, soccer, boxing matches, musical events, and even a mass conducted by the Pope. The Stadium was also called the "House that Ruth Built" by many to honor Babe Ruth, a Yankee who hit many home runs during the stadium's first years. The Stadium was torn down in early 2009.

All content from Kiddle encyclopedia articles (including the article images and facts) can be freely used under Attribution-ShareAlike license, unless stated otherwise. Cite this article:
Yankee Stadium (1923) Facts for Kids. Kiddle Encyclopedia.