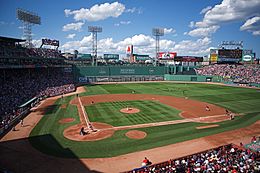 Fenway Park is a baseball stadium in Boston, Massachusetts. It is the home stadium of the Boston Red Sox. The park opened in 1912. It is the oldest of all current Major League Baseball parks.

The ballpark has also been the home field of several football teams. Some Boston college teams have played there. The New England Patriots also played there in their early years.

The name Fenway Park comes from the stadium being in the Fenway district of Boston. One of its well-known features is the Green Monster, a tall wall in left field.

The Major League Baseball All-Star Games in 1946, 1961, and 1999 were played at Fenway. Nine World Series games have been played there. 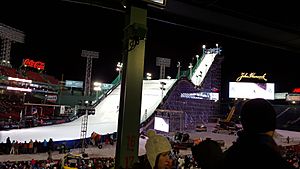 A 140 foot tall ski jump from center field to the pitcher's mound.

Fenway Park is not only used for baseball games.

Soccer, boxing, football and ice hockey matches have been played at Fenway and even a ski and snowboarding competition.

The park is also used for concerts.

Fenway Park during the 1914 World Series 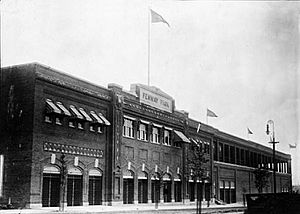 The Red Sox moved to Fenway Park from the old Huntington Avenue Grounds. In 1911, owner John I. Taylor purchased the land bordered by Brookline Avenue, Jersey Street, Van Ness Street and Lansdowne Street and developed it into a larger baseball stadium.

Taylor claimed the name Fenway Park came from its location in the Fenway neighborhood of Boston, which was partially created late in the nineteenth century by filling in marshland or "fens", to create the Back Bay Fens urban park. However, given that Taylor's family also owned the Fenway Realty Company, the promotional value of the naming at the time has been cited as well. Like many classic ballparks, Fenway Park was constructed on an asymmetrical block, with consequent asymmetry in its field dimensions. The General Contractor was the Charles Logue Building Company.

The first game was played April 20, 1912, with mayor John F. Fitzgerald throwing out the first pitch and Boston defeating the New York Yankees, 7-6 in 11 innings. Newspaper coverage of the opening was overshadowed by continuing coverage of the Titanic sinking a few days earlier.

Fenway Park has historically drawn low attendance, its lowest occurring late in the 1965 season with two games having paid attendance under 500 spectators. Its attendance has risen since the Red Sox' 1967 "Impossible Dream" season, and on September 8, 2008, with a game versus the Tampa Bay Rays, Fenway Park broke the all-time Major League record for consecutive sellouts with 456, surpassing the record previously held by Jacobs Field in Cleveland. On Wednesday, June 17, 2009, the park celebrated its 500th consecutive Red Sox sellout. According to WBZ-TV, the team joined three NBA teams which achieved 500 consecutive home sellouts. The sellout streak ended on April 11, 2013; in all the Red Sox sold out 794 regular season games and an additional 26 postseason games during this streak.

The park is located along Lansdowne Street and Yawkey Way in the Kenmore Square area of Boston. The area includes many buildings of similar height and architecture and thus it blends in with its surroundings. When pitcher Roger Clemens arrived in Boston for the first time in 1984, he took a taxi from Logan Airport and was sure the driver had misunderstood his directions when he announced their arrival at the park. Clemens recalled telling the driver "No, Fenway Park, it's a baseball stadium ... this is a warehouse." Only when the driver told Clemens to look up and he saw the light towers did he realize he was in the right place. 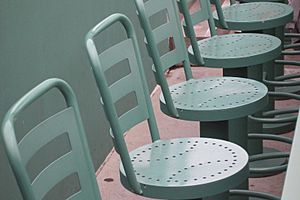 The seats atop the Green Monster 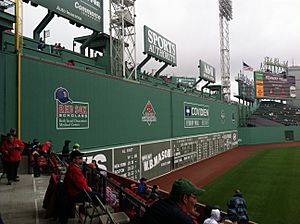 Part of the original ballpark construction of 1912, the wall is made of wood, but was covered in tin and concrete in 1934 when the scoreboard was added. The wall was covered in hard plastic in 1976. The scoreboard is manually updated throughout the game. Despite the name, the Green Monster was not painted green until 1947; before that it was covered with advertisements. The Monster designation is relatively new; for most of its history it was simply called "the wall." In 2003, terrace-style seating was added on top of the wall. 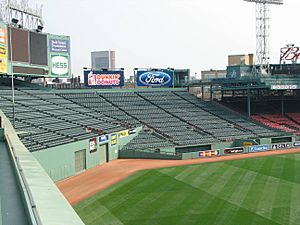 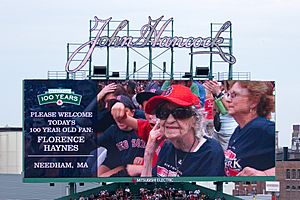 The Screen above the Triangle 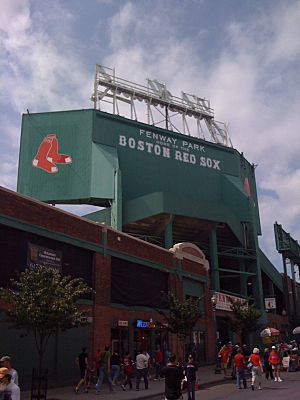 The rear of the screen from Lansdowne Street

There was once a smaller "triangle" at the left end of the bleachers in center field, posted as 388 feet (118 m). The end of the bleachers form a right angle with the Green Monster and the flagpole stands within that little triangle. That is not the true power alley, but deep left-center. The true power alley distance is not posted. The foul line intersects with the Green Monster at nearly a right angle, so the power alley could be estimated at 336 feet (102 m), assuming the power alley is 22.5° away from the foul line as measured from home plate.

"Williamsburg" was the name, invented by sportswriters, for the bullpen area built in front of the right-center field bleachers in 1940. It was built there primarily for the benefit of Ted Williams, to enable him and other left-handed batters to hit more home runs, since it was 23 feet (7.0 m) closer than the bleacher wall. 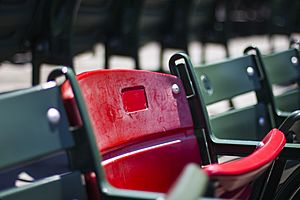 The ball landed on Joseph A. Boucher, penetrating his large straw hat and hitting him in the head. A confounded Boucher was later quoted as saying,

How far away must one sit to be safe in this park? I didn't even get the ball. They say it bounced a dozen rows higher, but after it hit my head, I was no longer interested. I couldn't see the ball. Nobody could. The sun was right in our eyes. All we could do was duck. I'm glad I did not stand up.

There have been other home runs hit at Fenway that have contended for the distance title. In the 2007 book The Year Babe Ruth Hit 104 Home Runs, researcher Bill Jenkinson found evidence that on May 25, 1926, Babe Ruth hit one in the pre-1934 bleacher configuration which landed five rows from the top in right field. This would have placed it at an estimated 545 feet (166 m) from home plate. On June 23, 2001, Manny Ramirez hit one that struck a light tower above the Green Monster, which would have cleared the park had it missed. The park's official estimate placed the home run one foot short of Williams' record at 501 feet (152.7 m). 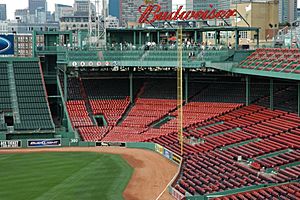 Although it is only 302 feet to "Pesky's Pole", the fence directly behind it sharply curves away.

Pesky's Pole is the name for the pole on the right field foul line, which stands 302 feet (92 m) from home plate, the shortest outfield distance (left or right field) in Major League Baseball. Despite the short wall, home runs in this area are relatively rare, as the fence curves away from the foul pole sharply. The pole was named after Johnny Pesky, a light-hitting shortstop and long-time coach for the Red Sox, who hit some of his six home runs at Fenway Park around the pole but never off the pole.

Pesky and the Red Sox give credit to pitcher Mel Parnell for coining the name. The most notable for Pesky is a two-run homer in the eighth inning of the 1946 Opening Day game to win the game (in his career, Pesky hit 17 home runs). In similar fashion, Mark Bellhorn hit what proved to be the game-winning home run off of Julián Tavárez, in Game 1 of the 2004 World Series off that pole's screen.

On September 27, 2006, on Pesky's 87th birthday, the Red Sox organization officially dedicated the right field foul pole as Pesky's Pole with a commemorative plaque placed at its base.

Fenway Park during a 2010 game vs. the Philadelphia Phillies.

All content from Kiddle encyclopedia articles (including the article images and facts) can be freely used under Attribution-ShareAlike license, unless stated otherwise. Cite this article:
Fenway Park Facts for Kids. Kiddle Encyclopedia.