Fenway–Kenmore is an officially recognized neighborhood of Boston, Massachusetts. While it is considered one neighborhood for administrative purposes, it is composed of numerous distinct sections (East Fenway, West Fenway, Audubon Circle, Kenmore Square) that, in casual conversation, are almost always referred to as "Fenway", "the Fenway", "Kenmore Square", or "Kenmore". Furthermore, the Fenway neighborhood is divided into two sub-neighborhoods commonly referred to as East Fenway/Symphony and West Fenway.

Fenway is named after the Fenway, the main thoroughfare, laid out by Frederick Law Olmsted. As of the 2010 Boston Redevelopment Authority Census, Fenway–Kenmore's population was 40,898, while its land area was defined to be 1.24 square miles (3.2 km2). 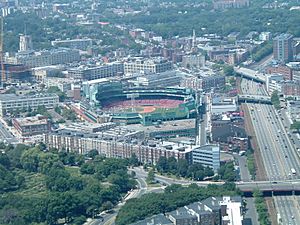 On the east, Fenway–Kenmore is separated from the Back Bay neighborhood by Charlesgate West, the Massachusetts Turnpike, Dalton Avenue and Belvidere Street. The South End is across Huntington Avenue near The First Church of Christ, Scientist headquarters, a major tourist attraction. East Fenway (generally south of the Massachusetts Turnpike) is separated from West Fenway by the Muddy River, which flows through the Back Bay Fens and into the Charles River north of Kenmore.

Across the southwestern corner includes the Longwood Medical Area down to St. Francis, Tremont, and St. Alphonsus Streets. To the south is the Mission Hill, part of the formerly independent city of Roxbury, which continues as the border extends along Ward, Parker, and Ruggles Streets, and the Southwest Corridor. Across St. Mary Street from West Fenway is the neighboring town of Brookline. The Kenmore neighborhood is located north and west of Fenway, roughly separated by the Massachusetts Turnpike. On the narrow strip of land between Brookline at Commonwealth Avenue and the Charles River, Kenmore extends to the Boston University Bridge, where it meets Allston-Brighton.

Throughout the neighborhood are brownstone townhomes, brick walk-ups, and five- to six-story apartment buildings, typically constructed between 1880 and 1930. Small, independently-owned shops are scattered throughout. Major commercial developments are in Kenmore Square and along Brookline Avenue, Beacon Street, Boylston Street, and Huntington Avenue. The baseball stadium Fenway Park is located immediately south of the Turnpike from Kenmore Square. Parts of Boston University, Northeastern University, the Berklee College of Music, and the Boston Conservatory of Music are located in Fenway–Kenmore, and many students reside in the neighborhood. Over the last 20 years almost every residential building in Kenmore has been purchased by Boston University and turned into dorms, especially in the Audubon Circle area between Beacon Street and Commonwealth Avenue.

The Fenway–Kenmore area was formed by land annexed from neighboring Brookline in the 1870s as part of the Brookline-Boston annexation debate of 1873 as well as from land filled in conjunction with the creation of landscape architect Frederick Law Olmsted parks in the 1890s. When planned, it was thought that the buildings built upon the Fenway parkway would house high-wealth residents and that the whole area would be a high-class neighborhood. As property values rose, however, it was educational institutions that sprung up along the Fenway's route. By 1907, there were twenty-two educationally focused organizations, including nine college and universities which had made their homes on the Fenway. Residential buildings that were built needed their frontages to be approved by the Park Board so that a "poor looking building [did not] depreciate the value of the whole neighborhood". Additionally, the Board had discretion on whether it felt a proposed building was suitable for frontage along the park and parkway. The hope of these building restrictions was that there would be an improvement in the look of the Fenway compared to neighboring streets. 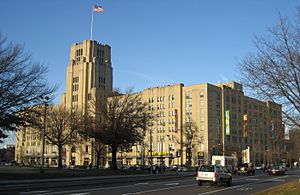 The Landmark Center was formerly a Sears mail order center and warehouse.

In the last few years, development in Fenway has picked up, particularly from developer Samuels and Associates. Recent developments include the renovation of the Landmark Center; the 2003 addition of Hotel Commonwealth on the site of the Rathskeller bar; and the 576-unit, 17-floor Trilogy apartment building on Brookline Avenue and Boylston Street. 1330 Boylston, a second high-rise apartment building, was completed in 2008 and contains 210 apartments, 85,000 square feet (7,900 m2) of office space contained within 10 floors and the new home of Fenway Health.

Planned developments include a 24-story mixed use development at the confluence of Boylston Street and Brookline Avenue, likely including retail, dining, and luxury hotel/apartments. Other plans include the renovation of the Howard Johnson motel on Boylston Street, to be rehabbed as an upscale hotel. Additionally, developer John Rosenthal is planning to build a complex named One Kenmore over the Mass Pike alongside the Beacon Street Bridge, comprising 525 units in one 17 floor tower and one 20 floor tower. Concerning infrastructure, in 2007 the MBTA renovated the Fenway Green Line stop and in 2014 renovated the nearby Yawkey commuter rail station. Finally, the Museum of Fine Arts, Boston recently completed a $425 million expansion, and the Isabella Stewart Gardner Museum completed construction of a second building.

West Fenway features streets named after Scottish cities and towns present in Robert Burns' literary works; Peterborough, Kilmarnock, Queensberry. This was a result of influence by the (Robert) Burns Memorial Association of Boston influencing the city of Boston when a decision was made to simplify the original neighborhood plan by Frederick Law Olmsted's office. As originally planned in 1894, the street naming system was to continue the system originating in the Back Bay of naming streets in alphabetical order. Where the Back Bay proper ends at Hereford Street, the Fenway was to continue Ipswich, Jersey, Kenyon (Kilmarnock), Lansdowne, Mornington, Nottingham, Onslow, Peterborough, Queensberry, Roseberry, Salisbury, Thurlow, Uxbridge, Vivian, Westmeath (Wellesley), X omitted, York, and Zetland.

The racial makeup of the neighborhood was 71% White, 7% Black or African American, 14% Asian, 4% from other races, and 3% from two or more races. Hispanic or Latino of any race were 8% of the population. 21.3% of the population was foreign born.

East Fenway has a large student population due to its proximity to area colleges and universities, while West Fenway, formerly known as a student haven, has seen rising interest from young professionals and families. The Kenmore Square area is mainly commercial with many residential units now owned by Boston University and used as on-campus housing for students. 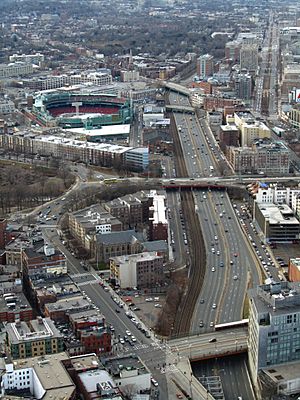 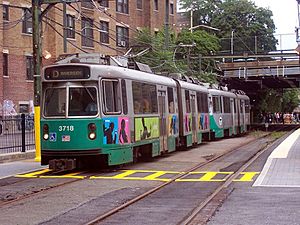 The neighborhood is ringed by the MBTA Orange Line Ruggles subway station and the following MBTA Green Line trolley stops:

Lansdowne station on the Framingham/Worcester Line of the MBTA Commuter Rail is located near Fenway Park and Kenmore Square and is served by all trains on the line. Fenway–Kenmore is also served by a number of MBTA buses connecting it to the city proper and the surrounding neighborhoods and communities.

As for roadways, Fenway and Park Drive circulate around the Fens. Boylston Street is a major east–west route, as are Beacon Street (MA 2) and Commonwealth Avenue (U.S. 20), which intersect at Kenmore Square. Brookline Avenue begins in Kenmore Square at this intersection and proceeds southwest. Huntington Avenue (MA 9) is on the southern border, while Massachusetts Avenue forms the eastern border, and is a major north–south route. Although the Massachusetts Turnpike cuts through the neighborhood, there are no access points to it except westbound only at Massachusetts Avenue and Newbury Street.

All content from Kiddle encyclopedia articles (including the article images and facts) can be freely used under Attribution-ShareAlike license, unless stated otherwise. Cite this article:
Fenway–Kenmore Facts for Kids. Kiddle Encyclopedia.