Brookline is a town in Norfolk County, Massachusetts, in the United States, and is a part of Greater Boston. Brookline borders six of Boston's neighborhoods: Brighton, Allston, Fenway–Kenmore, Mission Hill, Jamaica Plain, and West Roxbury. The city of Newton lies to the west of Brookline.

Brookline is especially notable as the birthplace and hometown of John F. Kennedy, 35th President of the United States.

Brookline was known as the hamlet of Muddy River and was considered part of Boston until the Town of Brookline was independently incorporated in 1705. (The Muddy River was used as the Brookline–Boston border at incorporation.) It is said that the name derives from a farm therein once owned by Judge Samuel Sewall.

The northern part of Brookline, roughly north of the D-line tracks, is urban in character, as highly walkable and transit rich. The population density of this part of town is nearly 20,000 inhabitants per square mile (8,000/km2), on a par with the densest neighborhoods in nearby Cambridge, Somerville and Chelsea, Massachusetts (the densest cities in New England), and just below that of central Boston's residential districts (Back Bay, South End, Fenway, etc.). The overall density of Brookline, which also includes suburban districts and grand estates south of the D-line, is still higher than that of many of the largest cities in the United States, especially in the South and West. Brookline borders Newton (part of Middlesex County) to the west and Boston (part of Suffolk County) in all other directions; it is therefore non-contiguous with any other part of Norfolk County. Brookline became an exclave in 1873, when the neighboring town of West Roxbury was annexed by Boston (and left Norfolk County to join Suffolk County), and Brookline refused to be annexed by Boston after the Boston–Brookline annexation debate of 1873.

Brookline separates the bulk of the city of Boston (except for a narrow neck or corridor near the Charles River) from its westernmost neighborhoods of Allston–Brighton, which had been the separate town of Brighton until annexed by Boston in 1873.

Brookline falls under the USDA 6b Plant Hardiness zone.

Serving as a residential zone for nearby academic and medical institutes such as Harvard Medical School and Boston University, the town of Brookline was reported as the city with the most doctoral degree holders (14.0% of total population) in the United States. 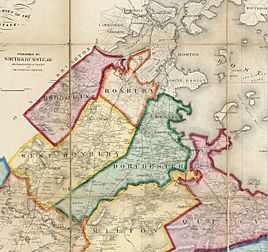 1858 map of north-central Norfolk County, showing Brookline (upper left) along with Dorchester, Roxbury and West Roxbury, all three of which were later annexed by Boston

Once part of Algonquian territory, Brookline was first settled by European colonists in the early 17th century. The area was an outlying part of the colonial settlement of Boston and known as the hamlet of Muddy River. In 1705, it was incorporated as the independent town of Brookline. The northern and southern borders of the town were marked by two small rivers or brooks, hence the name. The northern border with Brighton (which was itself part of Cambridge until 1807) was Smelt Brook. (That name appears on maps starting at least as early as 1852, but sometime between 1888 and 1925 the brook was covered over.) The southern boundary, abutting Boston, was the Muddy River.

The Town of Brighton was merged with Boston in 1874, and the Boston-Brookline border was redrawn to connect the new Back Bay neighborhood with Allston-Brighton. This created a narrow strip of land along the Charles River belonging to Boston, cutting Brookline off from the shoreline. It also put certain lands north of the Muddy River on the Boston side, including what are now Kenmore Square and Packard's Corner. The current northern border follows Commonwealth Avenue, and on the northeast, St. Mary's Street. When the Emerald Necklace of parks and parkways was designed for Boston by Frederick Law Olmsted in the 1890s, the Muddy River was integrated into the Riverway and Olmsted Park, creating parkland accessible by both Boston and Brookline residents.

Brookline has long been regarded as a pleasant and verdant environment. In 1841 edition of the Theory and Practice of Landscape Gardening, Andrew Jackson Downing described the area this way:

The whole of this neighborhood of Brookline is a kind of landscape garden, and there is nothing in America of the sort, so inexpressibly charming as the lanes which lead from one cottage, or villa, to another. No animals are allowed to run at large, and the open gates, with tempting vistas and glimpses under the pendent boughs, give it quite an Arcadian air of rural freedom and enjoyment. These lanes are clothed with a profusion of trees and wild shrubbery, often almost to the carriage tracks, and curve and wind about, in a manner quite bewildering to the stranger who attempts to thread them alone; and there are more hints here for the lover of the picturesque in lanes than we ever saw assembled together in so small a compass.

Brookline residents were among the first in the country to propose extending the vote to women. Benjamin F. Butler, in his 1882 campaign for Governor, advocated the idea.

Two branches of upper Boston Post Road, established in the 1670s, passed through Brookline. Brookline Village was the original center of retail activity. In 1810, the Boston and Worcester Turnpike, now Massachusetts Route 9, was laid out, starting on Huntington Avenue in Boston and passing through the village center on its way west.

Steam railroads came to Brookline in the middle of the 19th century. The Boston and Worcester Railroad was constructed in the early 1830s, and passed through Brookline near the Charles River. The rail line is still in active use, now paralleled by the Massachusetts Turnpike. The Highland Branch of the Boston and Albany Railroad was built from Kenmore Square to Brookline Village in 1847, and was extended into Newton in 1852. In the late 1950s, this would become the Green Line "D" Branch.

The portion of Beacon Street west of Kenmore Square was laid out in 1850. Streetcar tracks were laid above ground on Beacon Street in 1888, from Coolidge Corner to Massachusetts Avenue in Boston, via Kenmore Square. In 1889, they were electrified and extended over the Brighton border at Cleveland Circle. They would eventually become the Green Line "C" Branch.

Thanks to the Boston Elevated Railway system, this upgrade from horse-drawn carriage to electric trolleys occurred on many major streets all over the region, and made transportation into downtown Boston faster and cheaper. Much of Brookline was developed into a streetcar suburb, with large brick apartment buildings sprouting up along the new streetcar lines. 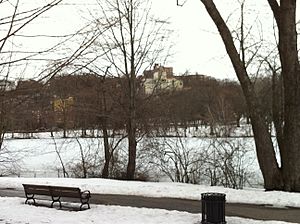 Overlooking Leverett Pond in Olmsted Park from the Brookline side 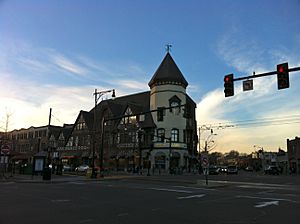 There are many neighborhood associations, some of which overlap.

The neighborhoods, squares, & notable areas of Brookline include: 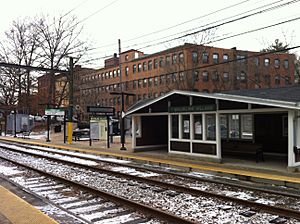 Brookline is served by the C and D branches of the MBTA's Green Line trains, with inbound service to downtown Boston and outbound service to Newton. The B line runs along the town's northern border of Commonwealth Avenue in Allston.

Brookline is twinned with:

All content from Kiddle encyclopedia articles (including the article images and facts) can be freely used under Attribution-ShareAlike license, unless stated otherwise. Cite this article:
Brookline, Massachusetts Facts for Kids. Kiddle Encyclopedia.