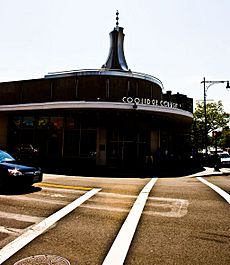 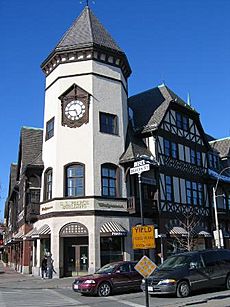 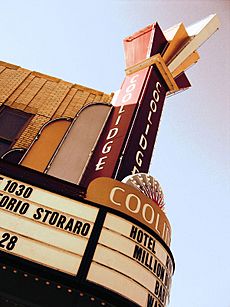 Coolidge Corner is a neighborhood of Brookline, Massachusetts, centered on the intersection of Beacon Street and Harvard Street. The neighborhood takes its name from the Coolidge & Brother general store that opened in 1857 at that intersection at the site of today's S.S. Pierce building, which was for many years the only commercial business in north Brookline.

Coolidge Corner developed as a transit-oriented streetcar suburb, and retains a pedestrian-friendly, walking around feel. Many popular coffee shops, pharmacies, small independent boutiques, an independent bookstore, and ethnic restaurants are located there, as well as a few retail chain stores. In recent years, an influx of national bank chains has taken over several prime storefronts, detracting from the traditional neighborhood retail mix. There is a growing community backlash against this trend.

The neighborhood has a significant Jewish population, and there are large synagogues located on both Beacon and Harvard streets. The northern portion of Harvard Street, near the border with the Boston neighborhood of Allston, is characterized by a cluster of Jewish-oriented shops, including a bookstore, giftshop, kosher butcher, and various other stores and eateries. 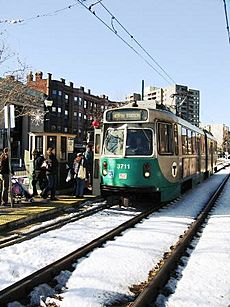 Coolidge Corner is served by the Coolidge Corner station of the MBTA's Green Line C branch that runs in a reserved central median along Beacon Street beginning at the St. Mary's Street stop west of Kenmore Square.

The #66 MBTA crosstown bus route runs through Coolidge Corner along Harvard Street on its way from Dudley to Harvard Square. The route is considered one of the MBTA's 15 key bus routes that have high ridership and higher frequency standards than other bus lines.

Coolidge Corner is home to a K-8 public elementary school, the Edward Devotion School. In 2018, Brookline's Town Meeting approved a warrant article to rename the school. The new name was decided by a community wide process. The school was formerly known as the Coolidge Corner School. In November 2019, members of the town voted to change the name to Florida Ruffin Ridley school. The name change took effect in September 2020.

All content from Kiddle encyclopedia articles (including the article images and facts) can be freely used under Attribution-ShareAlike license, unless stated otherwise. Cite this article:
Coolidge Corner Facts for Kids. Kiddle Encyclopedia.