Allston–Brighton is a set of two interlocking Boston neighborhoods, Allston and Brighton. 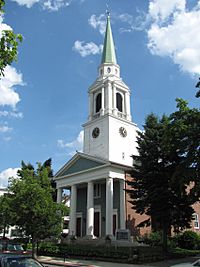 Allston and Brighton's border runs along Everett Street in the north, south along Gordon Street, and terminates at the Brookline town line along Kelton Street (with land to the east of these streets falling in Allston, to the west, Brighton). Allston and Brighton are also identified by their respective postal zip codes (Allston's is 02134, Brighton's is 02135). Allston is generally understood as being in the northeast corner of Allston–Brighton, where it meets Brookline and the rest of Boston in the commercialised Union Square or "Allston-Village" area. Brighton is seen as the larger southwestern portion of Allston–Brighton encompassing Brighton Center and the generally less urbanised neighbourhoods. They are connected to the Fenway/Kenmore area of Boston by a tiny strip of land containing Boston University along the Charles River, with Brookline lying to the south and southeast, Cambridge to the north and Newton to the west, so they retain a very distinct neighbourhood identity together. Allston–Brighton is often perceived as being separate from the rest of the city since many urbanised Greater Boston areas such as Cambridge and Somerville are independently governed cities, but it is in fact part of the city of Boston. It is divided by the Massachusetts Turnpike (also known as Interstate 90) into the main southern area and a smaller northern "spur" separated from Cambridge by the Charles River.

Allston–Brighton was formerly an agrarian area known as Little Cambridge. It was incorporated into the city of Boston and received one of the earliest streetcar lines, becoming one of the nation's first streetcar suburbs and home to some of Boston's moderately wealthy classes.

Today the area is a middle-class urbanised area occupied largely by a mix of dense residential neighbourhoods and small businesses. It is home to the New Balance Headquarters, and the WGBH Educational Foundation, operators of radio & television stations WGBH, WGBH-TV, & WGBX-TV; public broadcasters responsible for a large amount of national programming. Students from Boston's many universities are a large demographic in the area, and many residents resent the ongoing expansion of the Boston College and Harvard University campuses . Thanks in large part to students, Brighton Avenue at the heart of Allston has become a major nightlife destination featuring many bars, restaurants, and nightclubs.

The combined neighborhood supports a youth hockey team, "Allston–Brighton Youth Hockey" which holds most practices at the Reilly Memorial Rink in Cleveland Circle.

Allston–Brighton is one of Boston's most vibrant neighborhoods Diverse influences characterise the temperament of what some locals call Allston Rock City. A mixture of recent immigrants, college students, young professionals and artists adds to the diversity of the environment. Brighton Center, defined by Market and Washington Streets, is Allston's less rambunctious counterpart. Cleveland Circle is dominated by Boston College students.

All content from Kiddle encyclopedia articles (including the article images and facts) can be freely used under Attribution-ShareAlike license, unless stated otherwise. Cite this article:
Allston–Brighton Facts for Kids. Kiddle Encyclopedia.