Allston is a neighborhood of Boston, located in the western part of the city. It was named after the American painter and poet Washington Allston. It comprises the land covered by the zip code 02134. For the most part, Allston is administered collectively with the adjacent neighborhood of Brighton. The two are often referred to together as "Allston–Brighton." Boston Police Department District D-14 covers the Allston-Brighton area and a Boston Fire Department Allston station is located in Union Square which houses Engine 41 and Ladder 14. Engine 41 is nicknamed "The Bull" to commemorate the historic stockyards of Allston.

Housing stock varies but largely consists of brick apartment buildings, especially on Commonwealth Avenue and the streets directly off it, while areas further down Brighton Avenue, close to Brighton, are largely dotted with wooden triple-deckers. Lower Allston, across the Massachusetts Turnpike from the rest of Allston, consists of mostly 1890–1920s single-family and multi-family Victorian homes. 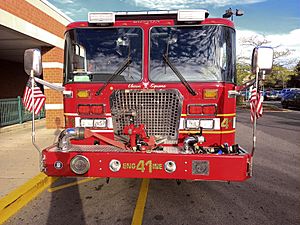 Allston is home to many immigrant populations, the largest groups being from Russia, East Asia (particularly Korea), South Asia, and South America (particularly Brazil and Colombia).

Young adults (age 18-34) make up 78.3% of the neighborhood's population (as compared to 39.4% for the city of Boston as a whole). The high concentration of students and "twenty-somethings" has created tension between some long-time residents and the student population which constantly cycles in and out as students matriculate and graduate from Boston's many colleges and universities. In addition to nightly dancing and live music at area bars, house parties abound on surrounding streets, particularly during the school year. This has long been a sore point among other Allston residents.

The neighborhood of Allston is almost completely cut off from the main body of the city of Boston by the town of Brookline, which borders Allston on the south and southeast. It is connected to the rest of Boston only by a small portion of its eastern border that is shared with the Fenway/Kenmore neighborhood. Allston is bordered on the east and north by the Charles River, separating it from the city of Cambridge, and is split in two by the Massachusetts Turnpike.

The area north of the turnpike near the Charles river is North Allston. It consists of streets north of Cambridge Street and the Turnpike, all the way to the Charles River. It extends westward to Everett Street and eastward to the Charles River. In its center is Allston Square at the crossroads of Western Avenue and North Harvard Street. Allston is named for the great painter and 1800 Harvard graduate, Washington Allston, "The Father of American Romanticism". Allston Square is appropriately located halfway between Harvard Square in the North and Allston Village, Boston's 'Greenwich Village' in the South. Allston is the only community in America named for an artist.

North Allston is a small neighborhood that consists of a mix of young professionals, blue-collar tradesmen, members of the educational community, homeowners, and long-term residents. Unlike the rest of Allston, North Allston has far fewer students. The neighborhood is very quiet, has extremely low crime, and is an easy walk to Allston Village or Harvard Square.

North Allston has close proximity to Route 2, the Mass Pike, Storrow Drive, and Soldiers Field Road. Public transportation includes the Red Line at Harvard Square, the Green Line at Packard's Corner or Harvard Avenue and Commonwealth Avenue and the 57, 66, 70, 71, and 86 bus connections on North Harvard Street and Western Avenue.

In the early 21st century, Harvard University announced dramatic expansion plans that called for major building projects, including the demolition of existing businesses, to prepare for the construction of new biology and science buildings in the northern sections of North Allston. While the existing building stock was demolished and businesses were evicted, the financial crisis of 2008 and the resultant decrease in Harvard's endowment caused the university to suspend the expansion projects. In 2016, Harvard began building again, has completed two new buildings and is starting on the new, state-of-the-art Paulson School of Engineering and Applied Sciences on Western Avenue west of Allston Square by the Charles River. Later, it will begin construction of the "Gateway" building on the northeast corner of Allston Square.

The Charles River, viewed at night in winter from the Weeks footbridge, with Allston to the right and Cambridge, Massachusetts to the left. 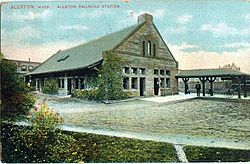 Allston was an eastern section of the former town of Brighton.

In 1867 a new railroad depot for the Boston and Albany Railroad opened. In 1868 the station and post office in Brighton's eastern portion were given the name "Allston" after Washington Allston, the noted painter who had lived and worked across the Charles River in the Cambridgeport section of Cambridge. It can even be said to have been named for a specific painting: Washington Allston's "Fields West of Boston."

Allston has never existed as a separate political entity in its own right. The Town of Brighton was annexed by the City of Boston in 1874. Henry Wadsworth Longfellow owned several properties in Allston. In 1887 the wooden depot was replaced by the station depicted at the right. In 1888 Boston's first trolley route began there, running a route through Coolidge Corner, Brookline, to Boylston Street, to downtown Boston.

The Allston community developed largely around large railroad and livestock operations. The Boston and Albany Railroad (now CSX) operated a major yard. Stockyards and a large abattoir operated nearby in the northern part of Brighton. Much of the railroad yard remains in use today as the CSX Transportation Beacon Park Yard, but all livestock activity ended by the mid-20th century. CSX plans to move its yard operation west, allowing the plot to be redeveloped by Harvard.

A strip running from Brighton Avenue in Allston out Commonwealth Avenue toward Kenmore Square was Boston's original "Automile", lined with automobile dealerships. Packard's Sales Stable and Riding School gave Packard's Corner its name, which was then perpetuated by the presence of an opulent Packard dealership. Only a Toyota dealer and a Vespa dealer remain, but the windowed buildings along the eastern end of Brighton Avenue reflect this history.

The Massachusetts Turnpike Extension, built largely on part of the Boston and Albany right-of-way, opened through Allston in 1964 and 1965.

Allston is home to numerous small businesses and restaurants. Brighton Avenue, between Packard's Corner and Allston Street, boasts various ethnic and national cuisines from around the world. Harvard Avenue hosts a number of furniture stores, thrift shops, and stores that offer items for resale, due to the large student body and high residential turnover.

The section of the neighborhood that lies immediately south of the turnpike and centers on the stretch of Harvard Avenue between Commonwealth Avenue and Cambridge Street also houses many shops, bars, and restaurants. Recent business promotion initiatives have dubbed this area "Allston Village."

Every year, in the days leading up to September 1, Allston experiences a period known as Allston Christmas. This period is referred to as such because it is the time of year when renters (many of whom are college students) move out their things so new renters (also frequently college students) can move in. The renters who are leaving put their unwanted possessions out in the streets for those who may want the items, which include couches, tables, kitchenware and clothing.

The "B" Branch of the Boston MBTA subway Green Line runs through the neighborhood along Commonwealth Avenue. The former "A Line" of the Green Line to Watertown Square ran along Brighton Avenue, and was replaced by MBTA bus route 57. Other MBTA bus lines serve Allston, including routes 64, 66, 70 and 86. 43.88% of residents commute by mass transit, compared with 2% for the country as a whole. Until 2013, the CSX Railroad operated the large Beacon Park freight yard which runs adjacent to the Massachusetts Turnpike; the land has been purchased by Harvard. From 2014 to March 2016, the MBTA included bus route 57 in its late night service, running until 3 am.

In May 2006, Harvard officials said that they would like to establish a commuter rail stop in Allston on the Framingham/Worcester line. This would restore service lacking since the closure of the long-dormant Allston train depot. As of 2009[update], there had been actions by the state legislature to restore train service in the area. In June 2012, plans were announced for a station to be called Boston Landing, located in Brighton, to serve the Allston-Brighton area.

In September 2014, plans for a $25 million commuter rail station nicknamed "West Station" were announced. The station's construction will coincide with a plan to straighten the Massachusetts Turnpike over the former CSX rail yard. The new station will initially operate exclusively on the Worcester/Framingham line, but will be constructed with four platforms to accommodate future uses that may include rapid-transit service to North Station via the existing Grand Junction rail line through Cambridge and Somerville.

All content from Kiddle encyclopedia articles (including the article images and facts) can be freely used under Attribution-ShareAlike license, unless stated otherwise. Cite this article:
Allston Facts for Kids. Kiddle Encyclopedia.