Neighborhoods in Boston facts for kids 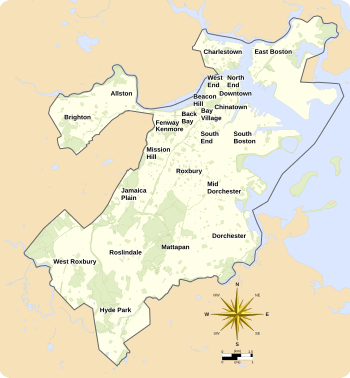 Boston's diverse neighborhoods serve as a political and cultural organizing mechanism. The City of Boston's Office of Neighborhood Services has designated 23 Neighborhoods in the city:

The Boston Redevelopment Authority, the City Parking Clerk, and the City's Department of Neighborhood Development have also designated their own neighborhoods. Unofficially, Boston has many overlapping neighborhoods of various sizes. Neighborhood associations have formed around smaller communities or commercial districts (often with "Square" in the name) that have a well-defined center but poorly identified extremities.

As the city of Boston has grown and evolved, its neighborhoods have changed as well. The names of the West End, North End, and South End refer to their positions on the Shawmut Peninsula, the original extent of Boston. Due to the annexation of surrounding communities, those neighborhoods are no longer at those geographic extremities. The Back Bay and Bay Village neighborhoods were formerly part of an actual bay, becoming the neighborhoods they are today after landfill projects expanded the size of the city.

Surrounding downtown are the neighborhoods of Chinatown/Leather District, South End, North End, West End, Bay Village, Beacon Hill, and Back Bay. Chinatown/Leather District is the historical garment district and today has thriving Chinese and other Asian populations. The South End is the center of the city's LGBT population and also populated by artists and young professionals as well as a vibrant African American community. The North End retains an Italian flavor with its many Italian restaurants, though many of its Italian families have moved out, while young professionals have moved in. The Back Bay, west of the Public Garden and Beacon Hill, a wealthy neighborhood, is the site of the Massachusetts State House. The Back Bay and Beacon Hill are also home to national and local politicians, famous authors, and top business leaders and professionals. Bay Village is one of the smallest neighborhoods in Boston and mostly contains Greek Revival-style row houses.

North and east of downtown are the neighborhoods of East Boston and Charlestown. East Boston has a majority of Hispanic and Brazilian population with a remnant of older Italians. On the north bank of the Charles River is Charlestown; once a predominantly Irish enclave and site of the Bunker Hill Monument, it is now a haven for young professionals.

West of downtown are the neighborhoods of Fenway Kenmore, Allston, Brighton and Mission Hill. Fenway Kenmore borders the campus of Boston University and houses many college students and young professionals and is the location of Fenway Park. Allston and Brighton are populated heavily by students from nearby universities, as well as recent graduates. Mission Hill is adjacent to the Longwood Medical district, full of world-class medical institutions and retains an extremely diverse mix of African Americans, Asian Americans, whites and Latinos.

South of downtown are the neighborhoods of Roxbury, Jamaica Plain, Dorchester, Mid Dorchester, and South Boston. Dorchester, including Mid Dorchester, is Boston's largest neighborhood and predominantly a working class community considered to be Boston's most diverse. Roxbury is populated largely by African Americans, Caribbean Americans, and Latinos and is historically the center of Boston's black community. Jamaica Plain is a community of white professionals and Latinos, and includes the larger side of the Arnold Arboretum. South Boston is a predominantly Irish-American neighborhood, which hosts the city's annual St. Patrick's Day parade. 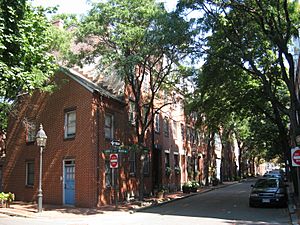 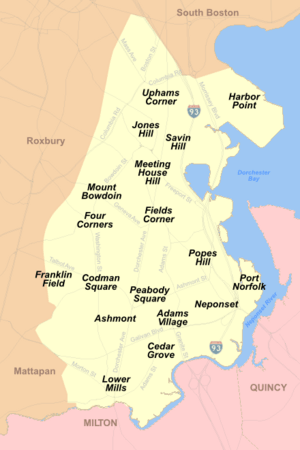 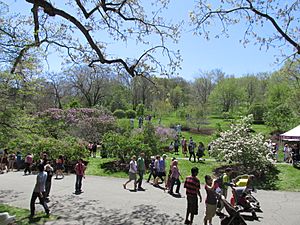 All content from Kiddle encyclopedia articles (including the article images and facts) can be freely used under Attribution-ShareAlike license, unless stated otherwise. Cite this article:
Neighborhoods in Boston Facts for Kids. Kiddle Encyclopedia.