Attractions include hiking trails, beaches, the Civil War-era Fort Warren on Georges Island and Boston Light on Little Brewster Island, the oldest lighthouse in the United States. Georges Island and Spectacle Island are served seasonally by ferries to and from Boston, connecting on weekends and summer weekdays with a shuttle boat to several other islands, Hull, and Hingham.

In 1996, there was a project proposal by Boston's mayor Tom Menino and Massachusetts Institute of Technology professor Clifford A. Goudey to revitalize the aquaculture and fish population in Boston Harbor. This would have involved using the old tanks and granite canals on Moon Island.

In 2008, Peddocks Island was used for filming scenes in Martin Scorsese's Shutter Island. 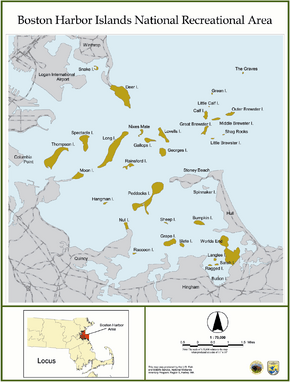 The Boston Harbor Islands National Recreation Area is made up of a series of rocky islands and other places on and around Boston Harbor. These include:

Two islands (Castle Island and Spinnaker Island) in Boston Harbor are not part of the National Recreation Area, and other former islands (e.g. Apple Island, Governors Island and Noddle's Island) were obliterated by the formation of East Boston and the expansion of Logan International Airport before the area was designated.

In addition, the Partnership includes representation from the Boston Harbor Islands Advisory Council, whose purpose is to make recommendations to the Partnership about park management. There are 13 Partners in total, together with 13 Alternates. Apart from the representative for the Coast Guard, who is appointed by the Secretary of Homeland Security, all the members of the partnership are appointed by the Secretary of the Interior after consultation with the appropriate agency or other body.

In practice, day-to-day management of each individual island or other site is the responsibility of one of the partner agencies or other bodies. The partnership provides a consistency and coordination across the whole park.

The park was developed from the 1970s by the Massachusetts Department of Environmental Management (DEM). In 1996, the Boston Harbor Islands National Recreation Area was created, including the State Park's islands and many others. However, due to the unusual partnership management arrangements of the National Recreation Area, the State Park still exists as a low profile administrative entity. It is now managed by the DEM's successor, the Massachusetts Department of Conservation and Recreation, from a park headquarters near to the ferry terminal in Hingham.

The islands of the Boston Harbor Islands State Park are: 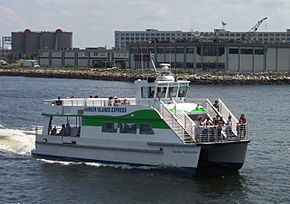 Ferries of the Harbor Islands Express link downtown Boston with some of the islands.

Boston Harbor Cruises offers ferry service from Long Wharf at Christopher Columbus Park to Georges and Spectacle Islands. Free service is available between Georges and Spectacle, as well as between the other islands. Summer service is also available from Hingham Shipyard and Hull to Georges Island via Grape, Bumpkin, and Lovells Islands. (These services are separate from MBTA Boat harbor ferries.)

Thompson Island is only open to the public on Sundays during the summer. It is served by a ferry leaving from both Spectacle Island and the EDIC dock on Terminal Street in South Boston, operated by the Thompson Island Outward Bound Education Center.

Private boats can dock (with various restrictions) at Spectacle, Grape, Bumpkin, Lovells, and Peddocks Islands. The public dock on Georges Island was recently condemned by engineers, although access is still available by making anchor off shore and using a dinghy to row ashore.

All content from Kiddle encyclopedia articles (including the article images and facts) can be freely used under Attribution-ShareAlike license, unless stated otherwise. Cite this article:
Boston Harbor Islands National Recreation Area Facts for Kids. Kiddle Encyclopedia.