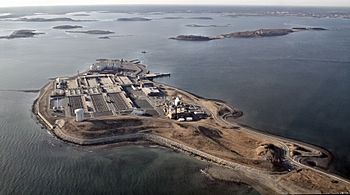 Deer Island is a peninsula in Boston, Massachusetts. Since 1996, it has been part of the Boston Harbor Islands National Recreation Area. Although still an island by name, Deer Island has been connected to the mainland since the former Shirley Gut channel, which once separated the island from the town of Winthrop, was filled in by the 1938 New England hurricane. Today, Deer Island is the location of the Deer Island Waste Water Treatment Plant, whose 150-foot-tall (46 m) egg-like sludge digesters are major harbor landmarks.

The island has a permanent size of 185 acres (0.75 km2), plus an intertidal zone of a further 80 acres (320,000 m2). Two-thirds of the island's area is taken up with the wastewater plant, which treats sewage from 43 nearby cities and towns, and is the second-largest such plant in the United States. The remainder of the island is park land surrounding the treatment plant, and offers walking, jogging, sightseeing, picnicking, and fishing.

1888 German map of Boston Harbor showing Deer Island on the middle right side.

It was once leased to Sir Thomas Temple (1614–1674), a British proprietor and governor of Nova Scotia, and said to be a descendent of the renowned Lady Godiva of Coventry although this descent was debunked by E. A. Freeman in the 19th century. Sir Thomas Temple was also the uncle of John Nelson (1654–1734), a New England trader and statesman, who owned neighboring Long Island in Boston Harbor which at one time was also known as "Nelson's Island."

Over the years, Deer Island has had several different uses. During King Philip's War (also known as Metacomet's War) in the 1670s, it was used as a place of internment. Christian "Praying Indians" were moved from Marlborough and Natick in spite of the efforts of John Eliot, the minister of Roxbury, to prevent it. Most went to Deer Island, but at least one colony was sent to Long Island. Additionally, a group of nine Praying Indian women and their six children were sent to Great Brewster Island because they did not wish to join their husbands on Deer Island.

During the winter of 1675–76 between 500 and 1,100 American Indians were held on the island and, without adequate food or shelter and because of exposure to harsh winter weather, many died. 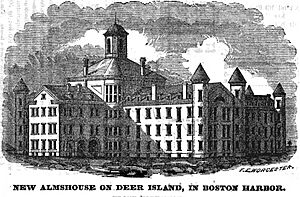 In the middle of the 19th century, the island was the landing point for thousands of refugees from the Irish Potato Famine, many sick and poverty-stricken. In 1847, a hospital was established to treat incoming immigrants, and during the following two years approximately 4,800 men, women, and children were admitted. Many recovered and went on to new lives, but more than 800 died. In 1850, an almshouse was built to house paupers. Opened in 1853, It was administered by the City of Boston. 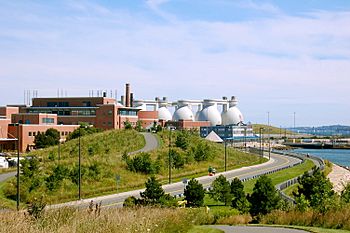 In his book A Short History of Nearly Everything, Bill Bryson mentions an experiment done at the military prison on Deer Island. Following the August 1918 flu pandemic, in an attempt to develop a vaccine, 62 volunteers were selected from 300 prisoners. These men were promised pardons if they survived a set of tests. None of the volunteers fell sick, but the ward doctor contracted the disease and died. It is possible that the prisoners became immunized due to exposure to the virus during the weeks preceding the trial, experiencing few symptoms or none at all. The doctor in charge of the experiment, Joseph Goldberger, published a report on the experiment in 1921. His report mentions the volunteers coming from a naval facility on Deer Island but nothing regarding prisoners or pardoning of sentences. Two separate entities existed on Deer Island for naval facilities and correctional facilities: Fort Dawes and the House of Correction. Goldberger's final report mentions two experiments on Deer Island at different times (November to December 1918 and February to March 1919) as well as a third in San Francisco (November to December 1918).

The first sewage treatment plant was constructed on Deer Island in the late 19th century and expanded in the 1960s. The current plant dates from the 1990s. Deer Island has been connected to the mainland since the New England Hurricane of 1938.

A lighthouse was erected just offshore from the island in 1890; it was replaced by a modern-style tower in 1984.

Deer Island is a popular recreation destination. A hiking/biking trail encircles the island, which is reachable via car, bus, or sea. A public boat dock is at the southwest corner of the island. Trails also climb escarpments on the island, including the highest one near the water tower. This vantage point offers views of the city, ocean, and Logan International Airport and is a popular spot for planespotting. The southern tip of the island offers some of the best views from land of the Boston harbor islands.

All content from Kiddle encyclopedia articles (including the article images and facts) can be freely used under Attribution-ShareAlike license, unless stated otherwise. Cite this article:
Deer Island (Massachusetts) Facts for Kids. Kiddle Encyclopedia.