The Town of Winthrop is a city in Suffolk County, Massachusetts, United States. The population was 17,497 at the 2010 census. Winthrop is an ocean-side suburban community in Greater Boston situated at the north entrance to Boston Harbor, close to Logan International Airport. It is located on a peninsula, 1.6 square miles (4.2 km2) in area, connected to Revere by a narrow isthmus and to East Boston by a bridge over the harbor inlet to the Belle Isle Marsh Reservation. Settled in 1630, Winthrop is one of the oldest communities in the United States. It is also one of the smallest and most densely populated municipalities in Massachusetts. It is one of the four cities in Suffolk County (the others are Boston, Revere, and Chelsea). It is the southernmost part of the North Shore, with a 7-mile (11 km) shoreline that provides views of the Atlantic Ocean to the east and of the Boston skyline to the west.

In 2005, the Town of Winthrop voted to change its governance from a representative town meeting adopted in 1920 to a council-manager form of government. Under Massachusetts law, as of 2006 when the new Town Charter took effect, Winthrop became a city. However, it is one of 14 cities in Massachusetts that chose to remain known as a 'town.' It is therefore referred to as a 'town' in this article.

Winthrop was settled in 1630 by English Puritan colonists as Pullen Poynt (Pulling Point), so named because the tides made hard pulling for boatmen. The present town is named after John Winthrop (1587–1649), second governor of the Massachusetts Bay Colony and an English Puritan leader. On April 8, 1630, Winthrop departed from the Isle of Wight, England on the ship Arbella, arriving in Salem in June where he was met by John Endecott, the first governor of the colony. John Winthrop served as governor for twelve of the colony's first twenty years of existence. It was he who decided to base the colony at the Shawmut Peninsula, where he and other colonists founded what is now the City of Boston.

Originally part of an area called Winnisimmet by the native Massachusett tribe, Pullen Poynt was annexed by the Town of Boston in 1632 and was used as a grazing area. In 1637, it was divided into fifteen parcels of land that were given by Governor Winthrop to prominent men in Boston with the stipulation that each must erect a building on his land within two years. Few, if any, of these men ever lived on these parcels of land, but their farms prospered. One of these early houses, the Deane Winthrop House, was the home of Governor Winthrop’s youngest son, Deane Winthrop, who lived there until his death in 1704. This house is still standing and is also the oldest continually occupied home in the United States. Although occupied, it is also open to the public at select times. The house is maintained by the Winthrop Improvement and Historical Association.

In 1739, what is now Chelsea, Revere, and Winthrop, withdrew from Boston due to governmental control disputes and became the Town of Chelsea. In 1775, residents of the Town of Chelsea played a key role in the Battle of Chelsea Creek of the American Revolutionary War. Again, the desire for more local control resulted in Revere and Winthrop seceding from Chelsea in 1846 to become North Chelsea. Shortly thereafter, in 1852, Winthrop was incorporated as a town in its own right with a Board of Selectmen and Open Town Meeting form of government. In 1920, Winthrop was the second town in the Commonwealth of Massachusetts to apply for and receive a Charter for a Representative Town Meeting, which continued to 2006.

As noted above, Winthrop adopted a home rule charter in 2005 with a council-manager form of government and is no longer governed by a representative town meeting. It is now legally a city, but chooses to be known as a town that has a city form of government. The new Town Charter, which took effect in 2006, was passed in a special election. The Board of Selectmen and Town Meeting were abolished, and legislative powers were vested in an elected Town Council. Executive power, largely ceremonial, resides in the Council President, who is popularly elected. An appointed Town Manager serves as the head of administrative services. 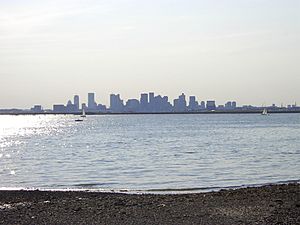 View of Boston from Winthrop's Point Shirley in 2003 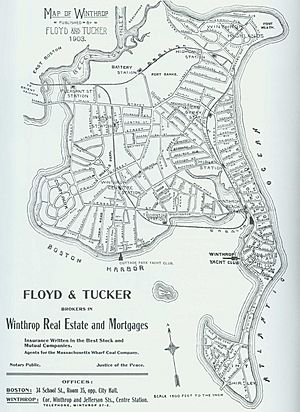 1903 map showing the stations of the former Winthrop Loop of the Boston, Revere Beach and Lynn Railroad

Winthrop is connected by land skirting the Belle Isle Marsh Reservation, which is shared across the Belle Isle Inlet with East Boston. The town was originally separated from Deer Island. Although still an island by name, Deer Island has been connected to Winthrop since the former Shirley Gut channel, which once separated the island from the town, was filled in by the New England Hurricane of 1938. The town is considered the northern dividing line between Boston Harbor to its west and Massachusetts Bay to its east.

The town is divided into several neighborhoods with a central downtown area, including Court Park and Cottage Park along the Boston Harbor side of town, and Point Shirley, Cottage Hill, Winthrop Beach, Ocean Spray, and Winthrop Highlands on the Massachusetts Bay side. The town is bordered by Revere to the north, and Boston on the northwest, west, and southeast. The water rights of the town extend to the edge of the county, and border those of Nahant in Essex County. As a result of the expansion of Logan International Airport, part of four of the runways (4L/22R, 4R/22L, 15R/33L, and most of 15L/33R) lies within what was once the water rights of the town. By land, Winthrop is 5.5 miles (8.9 km) from Beacon Hill, the measuring point for all road signs in Massachusetts.

Deer Island, though within the city limits of Boston, is located in Winthrop Bay. It ceased to be an island in the 1930s when Shirley Gut, which separated it from Winthrop, was filled in. The island has a sordid past as an internment camp for Native Americans during King Philip's War, a quarantine station where many immigrants died, and the site of a county jail. Today, the island is home to the mammoth Deer Island Waste Water Treatment Plant, which provides sewage treatment for the Boston area. In spite of the presence of the water treatment plant, Deer Island has been part of the Boston Harbor Islands National Recreation Area since 1996 and the remainder of the island consists of park land and offers walking, jogging, sightseeing, picnicking, and fishing. Part of the park land consists of a man-made earthen berm that partly conceals the treatment plant from view from Winthrop. The island is now popular with many Winthrop residents due to the effective park landscaping and spectacular views of Boston Harbor and the Atlantic Ocean.

Massachusetts Route 145 passes through the town as its only state route and the only connection to the mainland (via Main Street and Winthrop Parkway at opposite ends of town). It enters from the Orient Heights neighborhood of East Boston then passes in a loop around the main body of the town (bypassing Cottage Hill and Point Shirley) before leaving the town to the north, turning into the Winthrop Parkway in Revere. Two bus routes are provided by Paul Revere Transportation, which run from Point Shirley through the highlands and center of the town and terminate at Orient Heights. Paul Revere Transportation has operated the bus service in town since 1991. The service, which is subsidized by the MBTA, operates as Route 712 Point Shirley or Winthrop Beach to Orient Heights Station via Winthrop Highlands and Route 713 Point Shirley or Winthrop Beach to Orient Heights via Winthrop Center. This service does not accept MBTA Charlie Cards. Prior to this, the service was operated by Rapid Transit, which began bus service in Winthrop on January 28, 1940, the day immediately following the closure of the Boston, Revere Beach and Lynn Railroad (known as the "Narrow Gauge") which had a Winthrop Branch (1877-1940) with nine stations. The Blue Line of the MBTA subway system crosses near the town, with stops at Orient Heights Station, Suffolk Downs Station, and Beachmont Station, all of which are just a half mile from the city limits. A water transportation dock is located at the public landing and provides ferry service across Boston Harbor. Currently, Boston Harbor Cruises operates the service seasonally (May through October) between Winthrop and Rowes Wharf.

There were 7,843 households of which 23.6% had children under the age of 18 living with them, 43.1% were married couples living together, 11.5% had a female householder with no husband present, and 41.6% were non-families. 32.5% of all households were made up of individuals and 11.9% had someone living alone who was 65 years of age or older. The average household size was 2.3 and the average family size was 2.98. 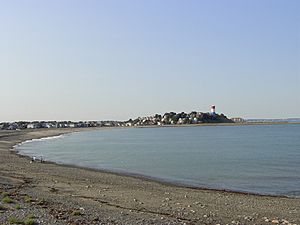 Winthrop has several places of worship for varyious denominations. They include:

Most Winthrop residents belong to various Christian denominations, such as Roman Catholicism, Methodism, and Episcopalianism. Adherents of Judaism make up a small, but historically significant, minority. Over the past four decades, the once large Jewish community has dwindled due to frequent migration to other parts of Massachusetts.

Winthrop has numerous beaches due to being surrounded by water. The major beaches are Winthrop Beach and Yirrell Beach; others include Donovan's Beach, Halford Beach, Pico Beach, Point Shirley Beach, and Short Beach.

Winthrop is home to two historic military forts, Fort Banks and Fort Heath. Fort Banks was a United States Coast Artillery fort, which served to defend Boston Harbor from enemy attack from the sea and was built in the 1890s during what is known as the Endicott period, a time in which the coast defenses of the United States were seriously expanded and upgraded with new technology. Fort Heath was built in 1898 also as a Coast Artillery fort. It is now replaced with the Fort Heath Apartment building, Seal Harbor condominia, and a small park on the bluff overlooking the Atlantic Ocean and Revere Beach.

Winthrop has five places on the National Register of Historic Places.

All content from Kiddle encyclopedia articles (including the article images and facts) can be freely used under Attribution-ShareAlike license, unless stated otherwise. Cite this article:
Winthrop, Massachusetts Facts for Kids. Kiddle Encyclopedia.