John Winthrop (12 January 1587/88 – 26 March 1649) was an English Puritan lawyer and one of the leading figures in founding the Massachusetts Bay Colony, the second major settlement in New England, following Plymouth Colony. Winthrop led the first large wave of immigrants from England in 1630 and served as governor for 12 of the colony's first 20 years. His writings and vision of the colony as a Puritan "city upon a hill" dominated New England colonial development, influencing the governments and religions of neighboring colonies. 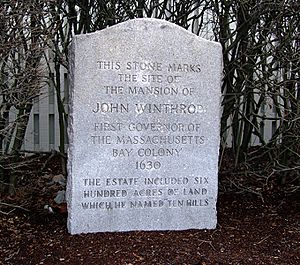 Historic Marker of the home of John Winthrop in Ten Hills, Somerville, Massachusetts

Winthrop was born into a wealthy landowning and merchant family. He trained in the law and became Lord of the Manor at Groton in Suffolk. He was not involved in founding the Massachusetts Bay Company in 1628, but he became involved in 1629 when anti-Puritan King Charles I began a crackdown on Nonconformist religious thought. In October 1629, he was elected governor of the Massachusetts Bay Colony, and he led a group of colonists to the New World in April 1630, founding a number of communities on the shores of Massachusetts Bay and the Charles River. Between 1629 and his death in 1649, he served 18 annual terms as governor or lieutenant-governor.

Winthrop's son John was one of the founders of the Connecticut Colony, and Winthrop himself wrote one of the leading historical accounts of the early colonial period. Many modern politicians refer to Winthrop's writings in their speeches, people as diverse as John F. Kennedy, Ronald Reagan, Michael Dukakis, and Sarah Palin. Ronald Reagan described Winthrop as "an early 'Freedom Man'" who came to America "looking for a home that would be free."

The coat of arms of John Winthrop

John Winthrop used a coat of arms that was reportedly confirmed to his paternal uncle by the College of Arms, London in 1592. It was also used by his sons. These arms appear on his tombstone in the King's Chapel Burying Ground. It is also the coat of arms for Winthrop House at Harvard University and is displayed on the 1675 house of his youngest son Deane Winthrop at the Deane Winthrop House.

John Winthrop's descendants number thousands today. His son John was the first governor of the Saybrook Colony, and later generations of his family continued to play an active role in New England politics well into the 19th century. Twentieth century descendants include former US Senator from Massachusetts and former Secretary of State John Kerry, and educator Charles William Eliot.

He is also the namesake of squares in Boston, Cambridge, and Brookline. The Winthrop Building on Water Street in Boston was built on the site of one of his homes and is one of the city's first skyscrapers.

A statue of Winthrop by Richard Greenough is one of Massachusetts' two statues in the National Statuary Hall Collection, Capitol in Washington D.C..

All content from Kiddle encyclopedia articles (including the article images and facts) can be freely used under Attribution-ShareAlike license, unless stated otherwise. Cite this article:
John Winthrop Facts for Kids. Kiddle Encyclopedia.