Edwardstone is a village and civil parish in the Babergh district, in the county of Suffolk, England. In 2011, there were 352 people living in Edwardstone civil parish. The parish contains the villages and hamlets of Mill Green, Priory Green, Round Maple and Sherbourne Street.

Edwardstone Hall was a country house located in the village. It was demolished in 1952, but there are several other buildings still located on its land, including two listed buildings described below: the Church of St Mary the Virgin and Temple Bar.

The parish contains the villages and hamlets (a hamlet is a settlement without a church) of Mill Green, Priory Green, Round Maple and Sherbourne Street. Edwardstone has a church called the Church of St Mary the Virgin. Edwardstone is on a tributary (a tributary is a smaller river that flows into another) of the River Stour. Edwardstone civil parish has 31 Listed buildings. Edwardstone has a Cricket Team in Hunts County Division 2. The team plays its home games at Homefields, Boxford. In the "History, Gazetteer, and Directory of Suffolk, and the Towns Near Its Borders" Edwardstone had 1872 acres of land which was mostly arable (land that can be used for growing crops), but it also included 105 acres of woodland.

The forest surrounding the village is called Edwardstone Woods. It is mainly broadleaved, mixed and yew woodland. It has been classified as scientifically important by the British government. 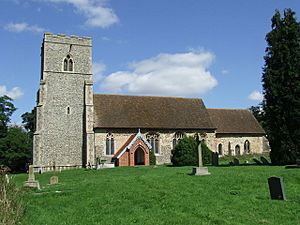 St Mary's Church, located on the former land of Edwardstone Hall. It is also a Grade I listed building. 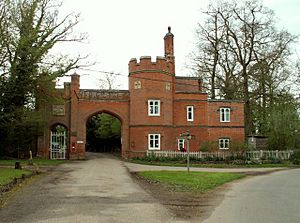 Temple Bar, the gatehouse to Edwardstone Hall. It is a listed building.

There are 31 listed buildings in Edwardstone.

All content from Kiddle encyclopedia articles (including the article images and facts) can be freely used under Attribution-ShareAlike license, unless stated otherwise. Cite this article:
Edwardstone Facts for Kids. Kiddle Encyclopedia.