Sudbury (/ˈsʌdbəri/, Suffolk dialect: /ˈsʌbri/) is a small market town in the English county of Suffolk. It is located on the River Stour near the Essex border, and is 60 miles (97 km) north-east of London. At the 2011 census, the town has a population of 13,063, rising to 21,971 including the adjoining parish of Great Cornard. It is the largest town of Babergh district council, the local government district, and is represented in the UK Parliament as part of the South Suffolk constituency.

Evidence of Sudbury as a settlement originates from the end of the 8th century during the Anglo-Saxon era, and its market was established in the early 11th century. Its textile industries prospered during the Late Middle Ages; the wealth of which funded many of its buildings and churches. The town became notable for its art in the 18th century, being the birthplace of Thomas Gainsborough, whose landscapes offered inspiration to John Constable, another Suffolk painter of the surrounding Stour Valley area. The 19th century saw the arrival of the railway with the opening of a station on the historic Stour Valley Railway, and Sudbury railway station forms the current terminus of the Gainsborough Line. During World War II, US Army Airforce bombers operated from RAF Sudbury.

Today, Sudbury retains its status as a market town with a twice-weekly market in the town centre in front of the redundant St Peter's Church, which is now a local community point for events such as concerts and exhibitions. In sport, the town has a semi-professional football club, A.F.C. Sudbury, which competes at the seventh level of the football pyramid.

Sudbury’s history dates back into the age of the Saxons. The town’s earliest mention is in 799 AD, when Aelfhun, Bishop of Dunwich, died in the town. The Anglo-Saxon Chronicle records the town as Suthberie ("south-borough"), presumed to distinguish it from Norwich or Bury St Edmunds, to the north. The town is also mentioned in the Domesday Book of 1086, as a market town where the local people came to barter their goods. The market was established in 1009.

A community of Dominicans arrived in the mid-13th century and gradually extended the size of their priory, which was one of three Dominican priories in the county of Suffolk. Sudbury was one of the first towns in which Edward III settled the Flemings, allowing the weaving and silk industries to prosper for centuries during the Late Middle Ages. As the main town in the area, Sudbury prospered too, and many great houses and churches were built, giving the town a major historical legacy. The Woolsack in the House of Lords was originally stuffed with wool from the Sudbury area, a sign of both the importance of the wool industry and of the wealth of the donors.

One citizen of Sudbury, Archbishop Simon Sudbury showed that not even the Tower of London guarantees safety. On 14 June 1381 guards opened the Tower’s doors and allowed a party of rebellious peasants to enter. Sudbury, inventor of the poll tax, was dragged to Tower Hill and beheaded. His body was afterwards buried in Canterbury Cathedral, but his skull is kept in St. Gregory’s with St. Peter’s Church, one of the three medieval churches in Sudbury. Simon's concerns for his native town are reflected in the founding of St Leonard's Hospital in 1372, a place of respite, towards Long Melford, for lepers. For the College of St Gregory, which he founded in 1375 to support eight priests, he used his father's former house and an adjoining plot.

From the 16th to 18th century the weaving industry was less consistently profitable and Sudbury experienced periods of varying prosperity. By means of the borough court, the mayor and corporation directed the affairs of the town. They built a house of correction (1624) for 'rogues, vagabonds and sturdy beggars' and tried to finance the reconstruction of Ballingdon Bridge, which disappeared during a storm on 4 September 1594. Among theatrical companies they paid to visit Sudbury were Lord Strange's Men (1592) and the King's Men (1610). Minor infringements, such as not attending church, were punished by fines, for worse offenders there was a stocks or a whipping. During the Civil War a 12-strong band of watchmen was created to prevent the town's enemies, presumed to be Royalists, burning it down.

Sudbury and the surrounding area, like much of East Anglia, was a hotbed of Puritan sentiment during much of the 17th century. Sudbury was among the town's called "notorious wasps' nests of dissent." During the decade of the 1630s, many families departed for the Massachusetts Bay Colony as part of the wave of emigration that occurred during the Great Migration.

By the 18th century the fees charged to become a freeman, with voting rights, were exorbitant and the borough of Sudbury, along with 177 other English towns, was reformed by a Municipal Reform Act (1835). 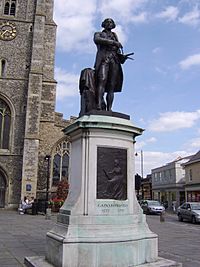 During the 18th century Sudbury became famous for its local artists. John Constable painted in the area, especially the River Stour. Painter Thomas Gainsborough was born in Sudbury in 1727, and was educated at Sudbury Grammar School. His birthplace, now named Gainsborough's House, is a museum to his work and is open to the public. It houses many valuable pictures and some of his family possessions. A statue of Gainsborough was unveiled in the town centre outside St Peter’s Church on Market Hill in 1913.

The 1832 Reform Act saw the villages of Ballingdon and Brundon appended to the town. In the 1841 general election Sudbury became the first place in the UK to elect a member of an ethnic minority to parliament, with David Ochterlony Dyce Sombre, the son of an Indian queen, winning the seat. However, he was not allowed to take his place in parliament as he was subsequently declared insane.

Sudbury's Catholic Church, Our Lady Immaculate and St. John the Evangelist, was designed by Leonard Stokes and erected in 1893. The shrine of Our Lady of Sudbury sits within its nave.

During the Second World War an American squadron of B-24 Liberator bombers of the 834th Squadron (H), 486th Bomb Group (H), 8th Air Force was based at RAF Sudbury. This squadron performed many important bombing and photographic missions during the war, but is perhaps best known as the "Zodiac Squadron", as its bombers were decorated with colourful images of the twelve signs of the zodiac painted by a professional artist named Phil Brinkman, who was taken into the squadron by its commander, Capt. Howell, specifically for the purpose of painting the bombers. Now most of the airfield buildings have been demolished, including the control tower. Sections of perimeter track, aircraft hard stand areas, and two narrow crossing lengths of former runways, provide footpaths between Chilton, Newmans Green and Great Waldingfield.

The Sudbury Society was formed in 1973 after a successful campaign to save the town's corn exchange from developers. However, in protecting its ancient centre the town has not shut itself off from modern development. As the town has expanded (to a population in 2005 of 12,080) modern retail and industrial developments have been added on sites close to the centre and on the eastern edge at Chilton. The 18th and 19th century houses near the town centre have been added to by modern developments. 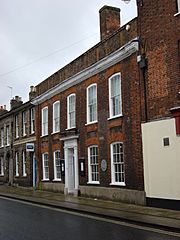 Thomas Gainsborough's house, now a public museum and gallery of his work.

Once a busy and important river port the last industrial building on the riverside in Sudbury has been converted into the town's only theatre, the Quay Theatre. The River Stour Trust, formed in 1968, has its headquarters in Sudbury, and a purpose built visitor centre located at Cornard Lock. The trust operates electric-powered boats from the Granary in Quay Lane, to Great Henny, a few miles downstream. Each September, the 24 mi (39 km) stretch of the River Stour hosts hundreds of canoe and small boat enthusiasts in a weekend event called Sudbury to the Sea, which finishes at Cattawade.

Valley Walk cycle route and footpath, starts at the Sudbury water meadows and continues along the disused railway track, finishing close to Long Melford Country Park, and then connects to Melford Walk.

Commencing in 2006 the town has hosted the charity fundraising pop music festival, Leestock.

By road, Sudbury is served by the A131 which runs from near Little Waltham, north of Chelmsford in Essex, and the A134 which runs from Colchester in Essex, through Bury St Edmunds, past Thetford in Norfolk to its west, before merging with the A10 south of King's Lynn. There is a taxi rank for Hackney carriages at Old Market Place. The bus station on Hamilton Road in the town centre provides services to neighbouring places, operated by H.C. Chambers & Son and other operators.

The railway arrived in Sudbury in 1847 when Sudbury railway station was built on the Stour Valley Railway. The town escaped the Beeching Axe of the 1960s and maintained its rail link with London, although many villages further up the river lost their railway stations. Sudbury railway station now forms the terminus of the branch line which is marketed as the Gainsborough Line, with stops at Bures and Chappel and Wakes Colne railway stations, terminating at Marks Tey railway station. This junction on the Great Eastern Main Line provides connections to London, where trains terminate at Liverpool Street station.

Formerly a port, from 1705, horse-drawn lighters transported grain to the numerous water-mills, locally made bricks, coal, and even coconuts used for mat-making in Sudbury and Long Melford. Cargoes, such as hay and straw, were transhipped in the River Stour estuary at Mistley into Thames barges for transport to London for the horses; they brought back horse-manure for the wheat and barley fields that lie on both sides of the river. During the Great War of 1914-18, and fearing German invasion, the remaining fourteen Stour Lighters were scuttled in Ballingdon Cut. One of these was raised and completely rebuilt by the Pioneer Trust in Brightlingsea. It was delivered, fitted with electric propulsion, to the River Stour Trust in 2012.

The Canadian city of Greater Sudbury, Ontario (formerly known as Sudbury and still referred to as Sudbury in everyday usage) was named after Sudbury, becoming a settlement in 1883 following the discovery of rich nickel and copper ores there during the construction of the Canadian Pacific Railway. The then-commissioner of the railway, who played a major role in the Canadian city's founding, was married to a woman who had been born in Sudbury, Suffolk, and the name was chosen to honour her.

Sudbury has two namesakes in the New England region of the United States: Sudbury, Massachusetts, and Sudbury, Vermont.

Sudbury is twinned with Höxter in Germany, Clermont in France and Fredensborg in Denmark.

As noted above, the artist Thomas Gainsborough was born in Sudbury and fellow painter John Constable worked in and near the town. 14th Century Archbishop of Canterbury, Simon Sudbury was born in the town as was, more recently, artist Maggi Hambling and professional footballer Stuart Slater. The Bayning family of Nayland, originally cloth merchants, entered the spice trade and were joint founders of the East India Company. Paul Bayning (1588–1629) was knighted in 1611 and created Viscount Bayning of Sudbury in 1628

All content from Kiddle encyclopedia articles (including the article images and facts) can be freely used under Attribution-ShareAlike license, unless stated otherwise. Cite this article:
Sudbury, Suffolk Facts for Kids. Kiddle Encyclopedia.